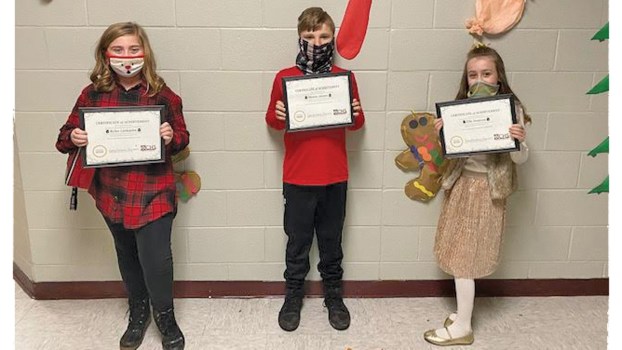 WILLOW WOOD — Each year, the Lawrence County Museum hosts a historical essay competition, open to all fourth graders in the county, in which students are asked to write about a local history topic of their choice.

Schools send the top essays to the museum, where they are judged by the trustees.

Typically, an awards ceremony takes place at the museum, but due to the COVID-19 pandemic, gatherings have been called off.

But, as luck would have it, all the winners this year were from the same school, Symmes Valley Elementary, in Jessi Newman’s class, so honoring all of them was easy.

Officials from the museum visited the school last week, where they gave the winners certificates for their efforts, as well as cash prizes.

In first place was Mason Adams, who won $50. He wrote about the Waterloo Wonders, the famed basketball team of the 1930s who originated near his school.

Coming in second was Rylee Littlejohn, who won $25 and wrote about 151 years of the Ironton-Lawrence County Memorial Day Parade.

And in third was Ella Damron, who won $15. She chose for her topic James Lawrence, the U.S. Naval officer and namesake of the county.

The museum has hosted the competition for 11 years.

Here are the winning essays this year: 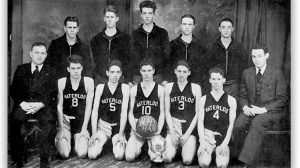 So here is all you would want to know about the Waterloo Wonders.

The 1934-1935 team of the Waterloo Wonders was probably the best high school team of that time. They were a pretty big team of 26 people, but, on the road, they could only have five — that’s just enough for one team! The reason was that they could only fit five people in coach Magellan Hairston’s car. But, somehow, they still managed to win 94-97 games. Now that’s impressive.

You know how they got so good. Somehow they practiced by tying up a bunch of rags to use as a ball, so they got used to playing with a ball that couldn’t even bounce! Which got them better by learning how to pass the ball instead of just dribbling it around all day which if you ask me, is what the professionals do now a days. But that’s not all the ways they entertained the fans. They also entertained the fans by their defense, trick passes, scoring ability, and hardwood antics.

And if you think that’s cool, you haven’t read nothing yet. The Waterloo Wonders were so good, they even defeated college teams!

In conclusion, that is how cool I think the Waterloo Wonders are. I hope you enjoyed this amazing documentary about the 1934-1935 Waterloo Wonders. The reason I like them so much is that I go to the same school. Only now with a different name. 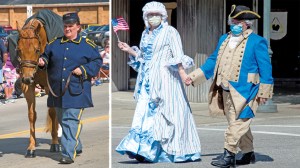 LEFT: The riderless horse is escorted along the route of the 2019 Ironton-Lawrence County Memorial Day Parade. (The Ironton Tribune | Heath Harrison) RIGHT: The 2020 Ironton_Lawrence County Memorial Day Parade was held without in-person spectators, due to the COVID-19 pandemic, and was livestreamed to viewers. (The Ironton Tribune | Heath Harrison)

The first Ironton Memorial Day Parade was on May 30, 1868. It came after an order from Union Army Gen. John A. Logan. He wanted a national day to remember the soldiers who died during the Civil War. The citizens of Ironton decided to honor these soldiers by forming a parade. The town has held a parade every year since then. In 1978, Congress recognized the Ironton Memorial Day Parade as the longest running parade in the country.

The Ironton Memorial Day Parade has changed and grown over the years. It now honors all the military and veterans of U.S. wars.

The parade is made up of military people and veterans, school bands, dancers, clubs, church groups, clowns, fire trucks and so much more that makes the parade fun to watch. Another interesting performance during the parade is the flyover by military fighter jets.

It takes a lot of time to prepare the parade each year. A parade committee made up of citizens and local club members spend several months organizing this event.

Last year, on May 25, 2020, the 152nd Ironton Memorial Day Parade was held without spectators. It was the first time that I did not attend the parade. This was due the COVID-19 pandemic. However, our community came together to continue our tradition by holding a smaller parade within health care recommendations to honor our veterans. Although observers could not be present, the parade could be watched worldwide by livestream and later on television. 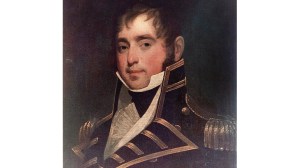 Lawrence County was named after a man named James Lawrence. James Lawrence worked as an American naval officer. During the war of 1812, he commanded the USS Chesapeake in a single-ship action against HMS Shannon, commanded by Philip Broke.

Today he is probably best known for his last words or dying command, “Don’t give up the ship!”

James Lawrence was 31 years old when he died. James fought against Barbary pirates.

James Lawrence was buried at Trinity Church Cemetery, New York. He worked as an American Navel Officer since 1798-1813.

James was born in Burlington, New Jersey but raised in Woodbury, New Jersey. His wife named Julia lived until 1865. They had a daughter named Mary Lawrence.

On Saturday, roughly 100 people gathered at Soldiers Plot in Woodland Cemetery to place evergreen wreaths on the graves of... read more