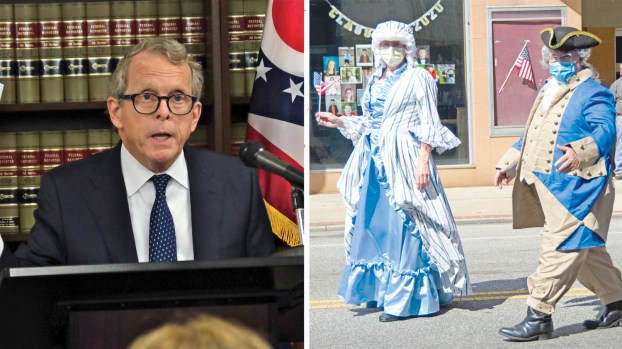 LEFT: Gov. Mike DeWine speaks at a news conference on the COVID-19 pandemic. (The Ohio Channel) RIGHT: The Ironton-Lawrence County Memorial Day parade took place this year without spectators due to the pandemic. (The Ironton Tribune | Heath Harrison)

Top 10 Lawrence County news stories of the year; COVID-19 pandemic made 2020 a year like no other

1. COVID-19 COMES TO LAWRENCE COUNTY
If there was one story that dominated everything this year, it was COVID-19. Events, big and small, were canceled, people had to work from home, schools were closed and school-related activities were canceled, and the state issued a slate of mandates to help lessen the potential of pandemic until hospitals could figure out how to deal with a deluge of COVID-19 patients.

The first case in Ohio was reported on March 9, 2020 and soon after, Gov. Mike DeWine ordered schools closed until March 16.

On March 12, Ironton Mayor Sam Cramblit gathered local officials in a mandatory meeting to tell them that he was declaring a state of emergency for the city that would limit large groups of people to 200 and eliminate visitors to nursing homes. DeWine limited gatherings to 10 people.

On March 25, 2020, the Lawrence County Health Department reported the first confirmed case of COVID-19 in the county.

The first COVID-19 death was reported on Aug. 13. The next day the health department confirmed three more. At that time, there were 348 people confirmed to have had the novel coronavirus.

2. COVID 19: EFFECTS
When cases began surfacing in Ohio, the first closures were at universities. Ohio University announced that its campuses would be going to a remote learning system, followed by Gov. Mike DeWine’s order to put K-12 schools on an extended spring break. This was lengthened to the remainder of the school year, with students taking part in remote learning.
Virtual classes highlighted the urban-rural divide in broadband services, with some districts at a disadvantage for such classes. Meanwhile, seniors at county high schools saw the cancellation of prom and other end-of-school events, while districts had to come up with alternate plans for graduation ceremonies.
Nonessential businesses in Lawrence County were shut down, as was the case statewide, for much of the spring, reopening in May with social distancing measures in place.
The pandemic also saw locals work to provide masks and personal protective equipment to hospitals and medical workers. The West Virginia Mask Army created hundreds of masks, using high end furnace filters, while individual citizens, such as Sherri Kincaid, of Coal Grove, sewed continuously to meet the need. 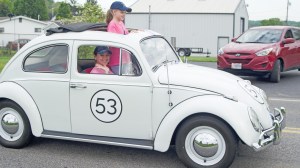 The village of South Point hosted a rolling car show as a way to offer socially distanced activities during the pandemic. (The Ironton Tribune | Heath Harrison)

Limits on mass gatherings impacted two of the county’s staple events. The Ironton-Lawrence County Memorial Day Parade was scaled down significantly, but the small parade maintained the tradition of the nation’s longest continuous Memorial Day observance of its kind. With crowd limits preventing grandstand attractions, the Lawrence County Fair was canceled for the year. In its place, an independent livestock show, organized by Carrie Cheek and Rob Calaway, took place at the fairgrounds, allowing youth to show the animals they had raised in 4-H and FFA programs in prior months. 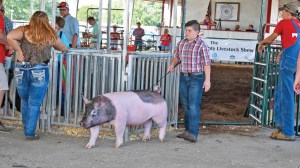 The Lawrence County Livestock show took place in July after the county’s fair was canceled due to the pandemic. (The Ironton Tribune | Taylor Burnette)

Across the county, many traditions were put to a halt, such as the Chesapeake tree lighting and People for the Point’s Christmas extravaganza, while others went virtual, such as the Lawrence County Chamber of Commerce’s Festival of Trees. Many socially-distanced events sprung up as well, such as South Point’s rolling car show and Rock Hill Schools’ festival of lights.

4. COVID-19 VACCINE ARRIVES
As the year came to a close, the light at the end of the tunnel could be seen. In November, it was reported that Pfizer’s COVID-19 vaccine was 90 percent effective, and several others soon followed.

While daily cases were at an all-time high in the last months of the year, it was welcome news and provided hope that normalcy will return in the coming year.

On Dec. 22, the first vaccines were administered in Lawrence County, to 11 workers at the county health department. These workers will then begin the phased process of bringing the vaccine to the population, starting with first responders and those in congregate settings. Gov. Mike DeWine announced last week that phase two of the process will involve teachers and faculty at the state’s schools.

5. OLBH CLOSURE
On April 30, Our Lady of Bellefonte Hospital closed after six decades.

It was set to close at the end of September, but closed early because most of the staff left for other employers.
OLBH was built in 1953 by Franciscan Sisters of the Poor, with 92 beds and 44 bassinets. In the years that followed, the facility grew into 214-bed hospital and several urgent care facilities around the area. With a staff of 1,200, it was the largest employer in Greenup County.

Bon Secours bought the hospital in 2000, after the Franciscan Sisters of the Poor Health System disbanded. In 2018, the Maryland-based Bon Secours Health System merged with the Cincinnati-based Mercy Health.

Bon Secours Health System and King’s Daughters Medical Center have an agreement to use the facility if needed during the COVID-19 pandemic.

Ground was broken on a waterline replacement project in Coal Grove this summer. (The Ironton Tribune | Austin Johnson)

Ground was broken a much-anticipated project in Coal Grove in October.

The village submitted a $4.2 million project to the EPA and was approved to matching 50 percent principle forgiveness. They borrowed $2.1 million at zero percent interest over 30 years.

Coal Grove also received a $250,000 grant from the Appalachian Regional Commission and $750,000 in Community Block Development Grants, as well as $400,000 from the Ohio Public Works Commission.

In South Point, the village approved contract designs for water line replace, to upgrade a decades-old system, while, at the same time, addressing the issue of high usage among residents.

A water rate analysis was commissioned through the Rural Community Assistance Program after village administrator Russ McDonald expressed concern that current usage was not sustainable by the system. The possibility of going to a metered system has been discussed in recent months in order to curb high usage.

In December, the village council passed a revision of water rates, with the monthly rate to be raised by $2.50 a month, taking effect in 2021.

Work also continued on a $20.6 million Russell viaduct replacement project on the Kentucky side of the Oakley C. Collins Memorial Bridge. This includes building a new KY 244 looping westward from U.S. 23 to a new flyover bridge across U.S. 23 and the railroad tracks on the river side to touch down where the old viaduct bridge connects to Bellefonte Street in downtown Russell. Work will continue into 2021. 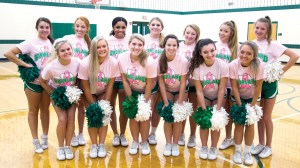 Despite the circumstances of the year, many students from Lawrence County were able to excel and win honors.

In February, Fairland High School’s cheerleading team, coached by Shawna Leep, competed in the 2020 UCA National High School Cheerleading Championship in Orlando, Florida. The event, which took place, fortunately, before the pandemic hit, was the school’s first time at nationals since 1997. The team of 13 ended up making it to finals in the event and placed fourth in the nation.

Two high school seniors who graduated in 2020 did so after being named National Merit Scholarship finalists — E.J. Daniels, of South Point High School, and Bella Schrader, of Tri-State STEM+M Early College High School. They were among the 15,000 finalists named from the 1.6 million semifinalists.

A teen author from South Point received commendation for her work — Hannah Boggs, of South Point, who graduated from the Ohio Connections Academy, was the winner of the 2019 award for Best Paranormal Book from the Indies Today Awards for her first novel, “Violent Delights,” the first of a planned supernatural trilogy.

Students at Rock Hill High School were honored by the state for one of their projects. Ohio Treasurer Robert Sprague visited the school where he honored those involved in the Redmen Roaster, a coffee shop on campus. Sprague presented teacher Lou Ann Capper, who oversees the project, with the Compass Award for helping to advance financial literacy.

Sami Anderson, a 16-year-old from St. Joseph High School, became the first female in the region to advance to the Life Rank with Scout Troop 7106. A ceremony took place in August and she attained the designation, putting her on the path to Eagle Scout. Her honor comes a year after the Boy Scouts changed their policy to allow girls to join in separate, gender-specific groups.

And, in one of the last multi-school events before the pandemic closures took effect, St. Joseph High School was the winner of the Ironmaster Quiz Bowl tournament at Ohio University Southern in early March. 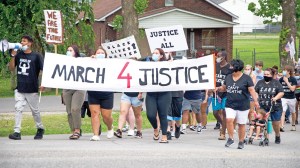 A March 4 Justice took place in South Point in the summer. (The Ironton Tribune | Heath Harrison)

This summer marked numerous marches after the death of Minneapolis man George Floyd. The police were called on him after he tried to buy items at a convenience store with what the clerk alleged was a counterfeit $20 bill. A white Minneapolis police officer put his knee on the Floyd’s neck for eight minutes and 46 seconds and a video of the incident sparked global protests.

In June, a Unity March took to the streets of Ironton, in not only Floyd’s name, but in the name of Guy Thomas.

On March 8, 2008, the body of 45-year-old Thomas was found in the parking lot of the Ironton Police Department underneath the cruiser of officer Richard Fouts. Thomas was pronounced dead at the scene. Fouts was accused of dragging Thomas 10 blocks from near the Ninth Street playground on that snowy night. The Unity March followed the same path.

In July, 150 people participated in a march for social justice and listened to speakers who at South Point Park.

A company called Braidy Industries was going to build a state-of-the-art aluminum mill in Greenup, Kentucky and bring 600 jobs in a high-tech environment with robots and artificial technology in a factory with $580 million worth of new equipment.

By the end of 2020, the board of Braidy Industries and its CEO and founder Craig Bouchard were suing each other after Bouchard was ousted by the board in January. By June, the board and the founder settled their suits, although details of the settlement weren’t released. As part of the settlement, Bouchard stepped down from the board of directors and is no longer involved with the company in any capacity.

In September, Braidy Industries announced that the company has a new name — Unity Aluminum which “signifies the company’s steadfast commitment to its customers, innovative technologies and local community in Ashland, Kentucky.”

Bouchard started a company called Ecolution kWh, which hopes to harness the kinetic energy produced by moving vehicles and use it to make electric vehicles go longer distances without having to recharge or to use that electricity to power something like refrigerated trailers.

Construction of the mill was to take two and a half years for the first phase and another year and a half for phase 2.

To date, no construction taken place.

10. SOUTH POINT PRINCIPAL REMOVED
A contentious meeting took place at the South Point Board of Education in February, the result of a social media post that circulated heavily among the community.

The post contained audio of the school’s principal, Mylissa Bentley, angrily reprimanding a student. It resulted in the special meeting being called at the board, which was packed with hundreds of students and parents, who expressed their outrage of the tone of the reprimand.

At a second meeting, the board voted, 5-0, not to return Bentley to the school and her duties were then taken over by the school’s assistant principal. Sara Chapman, who became principal in the fall.

— Coming up Saturday: The Ironton Tribune looks at the lives of many we lost locally in 2020.

PROCTORVILLE — A parade is planned for Friday to honor a Proctorville man as he becomes a centenarian. Lenville Mays... read more