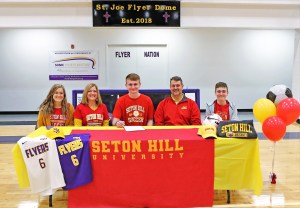 Jared Johnson is very devout in his faith, but there are two four-letter words that he will not remove from his vocabulary.
Hard work.
“Nothing has ever easy for me. I’ve always had to work for stuff. I just always work hard and I think my work ethic will help push me through this,” said Johnson.
What Johnson is looking to work hard at and push through is his career playing college soccer as the St. Joseph Flyers’ senior standout signed to play with the Seton Hill Griffins, an NCAA

Division 2 school that is a member of the West Virginia Intercollegiate Athletic Conference.
“I’m very excited. There’s going to be more of a challenge. It’s very fast. It’s a much faster-paced game than the high school level. I’m just going to have to work harder when I get there,” said Johnson.
Seton Hill is located just southeast of Pittsburgh and is a member of the West Virginia Intercollegiate Athletic Conference.
WVIAC members include Alderson Broaddus, Bluefield State, Charleston, Concord, Davis & Elkins, Fairmont State, Glenville State, Ohio Valley University, Pittsburgh-Johnstown, Shepherd, West Virginia Liberty, West Virginia State, West Virginia Wesleyan and Wheeling.
Signing with Seton Hill will extend Johnson’s soccer career that has been a part of his routine for most of his life.
“I started playing when I was little. I started at the age of 3. It just came natural. It was just fun. There’s no stress, just time for relaxation,” said Johnson.
Beside Seton Hill, Johnson said he looked into Thiel College, Pikeville University, Georgetown (Ky.) College and the University of Charleston. But there was one major overriding aspect that was important to him in making the decision.
“I’ve always been in a Catholic homestead and Catholicism is a big part of my life and it’s a Catholic school, so it’s very involved. It’s like one, big family. Everyone is there for you. If you need help, you can always find someone who can help you,” said Johnson.
Although Seton Hill has just 2,200 students, Johnson noted his senior class at St. Joseph is comprise of just 13. He said that will be somewhat of an adjustment.
“I’ll have to get used to the bigger classes. I’ll have to adjust to the general education classes, but the nice thing is when I get into my own specific classes, there are only 10 to 13 people and I’m more of a small class person,” said Johnson.
When it comes to being on the field, 17-year veteran head coach Dan McCarty said Johnson is a welcomed addition to the program.
“We will look for Jared to continue to develop as a player and bring his skills to our back line,” said McCarty.
“We love his mentality, size, athleticism, grit and determination and specifically recruited those characteristics in Jared.
“We also love the fact that he is a high character guy, comes from a great family and he’s a very good student. We look forward to seeing what the future holds for him at Seton Hill.”
Johnson knows there are no guarantees once he gets to the next level, but he still plans to attack the challenge head-on and wants to earn playing time and hopefullyt start in his rookie season.
“Coach McCarty says there’s a lot of playing time and opportunity to play. I’ve just got to work very hard over the summer to pursue my dreams,” said Johnson who is expected to play left backer initially.
St. Joseph Flyers’ veteran head coach Mike Balestra has coached Johnson for the past four years and he said Johnson will be a model student/athlete for the Griffins.
“He’s one of the harder workers on the team. He always shows up, plays hard. He’s got a lot of experience. He’s a versatile player. He started out as a goalie. He can play just about anywhere on the field. We needed some good backs so he played back there,” said Balestra.
“Knowing Jared, as hard as he works, he’ll accomplish anything he wants to accomplish. Jared is a great kid and a great good student.”
But one thing that Johnson stopped to emphasize was his team and all the students in the school.
“I just want to say my teammates have been very helpful and very competitive and just helping us to do our best and push our school where it hasn’t been before. We’ve got district runner-up twice and even in basketball we are pushing new limits for St. Joe,” said Johnson.
Johnson plans to major in biology and math and then go into the LECOM program which is the Lake Erie College of Osteopathic Medicine for his medical school education.