Viaduct bridge work ahead of schedule 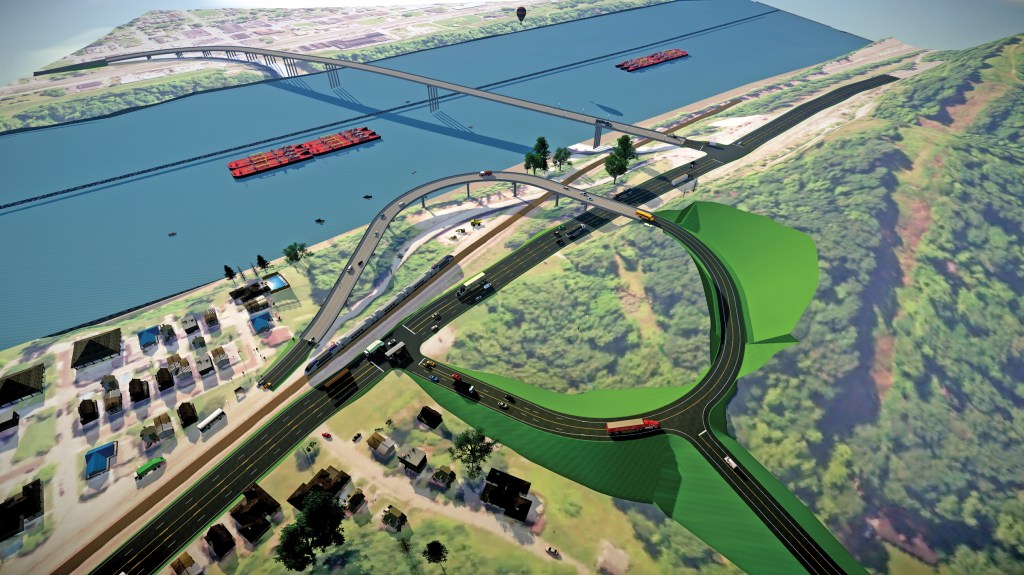 RUSSELL, Ky. — The work on the new bridge into Russell, Kentucky is going well for its late summer opening.

“It is on schedule, if not ahead of schedule, as far as the whole project goes,” said Kentucky Transportation Cabinet District 9 spokesperson Allen Blair. “The contractor still expects to have it open sometime this summer, as long as we don’t have any issues putting the bridge together.”

He said the bulk of the earthwork on the hill for a new roadway is done and what is starting in earnest now is the bridge construction.

For the past few months, crews have been cutting into the hillside on the southern side of U.S. 23 for the roadway of the new bridge and putting piers up on the side by the Ohio River to accommodate the rounding “flyover” design of the new KY-244 bridge, which will loop westward along part of KY 750 then back to a new flyover bridge across U.S. 23, railroad tracks and the existing viaduct on the river side to touch down where the old bridge connects to Bellefonte Street in downtown Russell.

“In a few months, I think people will see the shape of it and how it will look,” Blair said.

The “flyover” design was chosen so the current 82-year-old bridge into downtown Russell, Kentucky could remain open for traffic during construction and to get rid one of the lanes of traffic at the entry of U.S. 23 to the Oakley C. Collins Memorial Bridge.

Blair said crews are finishing work on a final pier between the old viaduct bridge and U.S. 23 “and that will be wrapping up soon.” Crews are also finishing up some drainage work and utility work.

The next phase of work is placing the steel girders on the piers.

“We expect some of that work to begin next week,” Blair said. “There are a lot of moving parts to come together, but tentatively, the first steel beams should be delivered on Jan. 19 and then they will put them on the piers. Once that begins, they are constructing the bridge.”

There may be some temporary road closure or lane reduction of the road into Russell, Kentucky when the girders are delivered or placed on the piers, but traffic will be maintained.

Although Blair suggested that it may be a little easier to get into downtown Russell by going through the underpass.

There will be about three or four weeks of the girders being delivered and the Kentucky Transportation Cabinet will send out information about road closures.

After the steel beams are placed, crews will begin building the framework for the foundation of the roadway. The step after that is the laying of the concrete for the roadway.

“Section by section, it will come together and connect over to the hillside,” Blair said.

He said putting down the asphalt won’t happen until spring, which is when the asphalt companies begin production for the spring and summer road construction season.

To see more details and updates about work on the Russell viaduct bridge, go to transportation.ky.gov/DistrictNine/Pages/RussellViaduct.aspx.