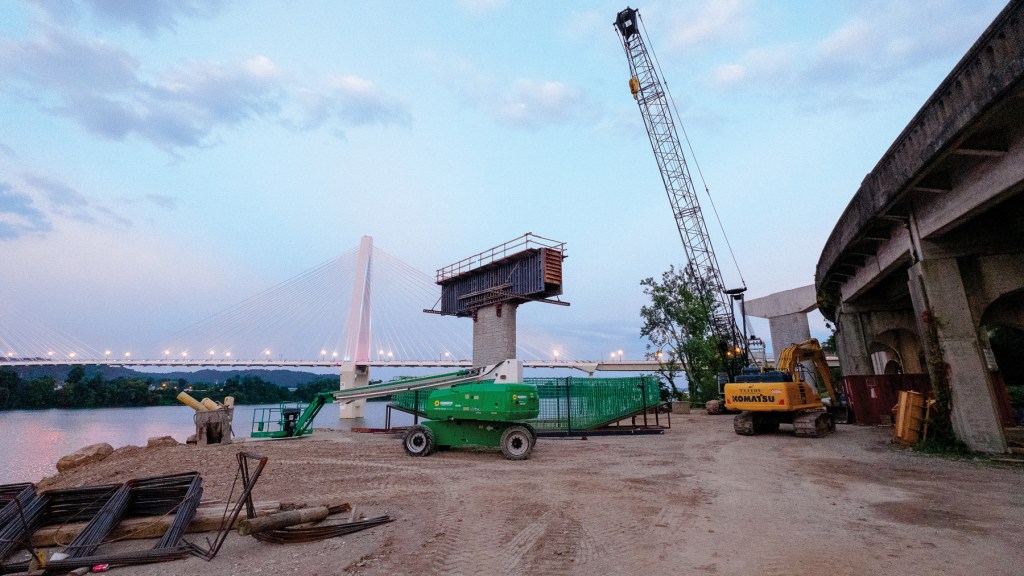 The work on a new “flyover” bridge to replace the 82-year-old bridge into downtown Russell, Kentucky began in May and crews have been removing part of a mountain next to Kentucky Road 750 on the south side of U.S. 23 and building supports for the new bridge. (The Ironton Tribune|Jeremy Holtzapfel)

On Tuesday, steelworkers will begin offloading and placing girders on newly-built bridge piers adjacent to the existing Bellefonte Street viaduct.

The work will require flagged traffic or temporary traffic stops on KY 244 several times a day between 8 a.m.–5 p.m. each Tuesday, Wednesday, and Thursday for the next four weeks.

Contractors will coordinate daily traffic changes, and when necessary flaggers will be positioned on KY 244 in Russell and at the U.S. 23/KY 244/Oakley C. Collins Memorial Bridge intersection to direct traffic.

Because significant delays are possible on the heavily-traveled highways – as many as 20,000 vehicles a day use them – motorists are advised to seek alternate routes when possible into and out of downtown Russell during construction times.

Motorists should note that the current construction work zone also includes U.S. 23 between the Oakley C. Collins Memorial Bridge and the downtown Russell underpass, mile markers 2 to 3. A right lane is closed on southbound U.S. 23; and Kenwood Drive (KY 750) is closed at the U.S. 23 intersection.

The $20.6 million Russell viaduct replacement project includes building a new KY 244 looping westward from U.S. 23 to a new flyover bridge across U.S. 23 and the railroad tracks on the river side to touch down where the old viaduct bridge connects to Bellefonte Street in downtown Russell.