From Farm to Farmacy 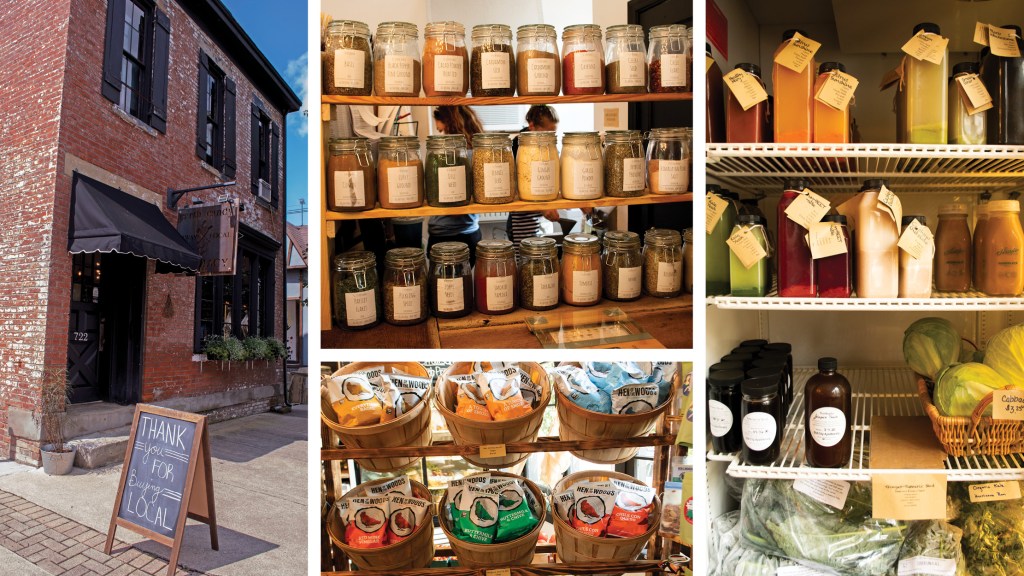 Some of the offerings at the Farmacy include bulk goods, like pastas, dried beans, seasonings, oils, vinegars, all of which are gluten free. For safety precautions related to the pandemic, the bulk goods are not self-serve, but customers can still safely bring in their own containers. (Photography by Rachael Layne)

PORTSMOUTH — Sasha and Kevin Wilson began farming in 2009 with their two kids, and like many other farmers, always wished there was a place they could sell their produce other than the weekly farmers market.

When Kevin got a job and the family moved to New Boston, Ohio from Parkersburg, West Virginia, they were inspired to create a place for other farmers and vendors in their new community. This led to Earth Candy Farmacy, a shop selling an array of locally made and grown products in Portsmouth.

“I figured we could get a hold of local farmers and we could get all their products in here, local vendors, artisans,” Sasha Wilson, who now owns Earth Candy Farmacy with her husband, said.  “We’ve got seasoning brought by local people, sauces by local people, and then produce grown by everybody around here, rather than, like 400 miles away. We’re right here.”

Some of the offerings at the Farmacy include bulk goods, like pastas, dried beans, seasonings, oils, vinegars, all of which are gluten free. For safety precautions related to the pandemic, the bulk goods are not self-serve, but customers can still safely bring in their own containers.

“We’re making sure everything is sanitized,” Sasha said. “We have a way to sanitize containers before we actually fill them, and they’re never touching.”

Additionally, Earth Candy Farmacy sells local honey, maple syrup, canned goods and an array of pickle products. Other items include fresh baked breads, local cheeses, local butter and milk products with reusable glass bottles that can be brought back to the store to be sanitized and reused.

Items are not limited to food products though, with the store also offering products like healing balms and natural deodorant as well.

“It’s a little mix of everything, just because everybody around us really makes all sorts of things.” Sasha said. “You really don’t have access to it or even know about it unless you know someone who knows somebody. This way, everything’s here.”

A favorite product of Sasha’s is the cold pressed juices, because it allows her to get her greens in.

“We have two different green juices, and I don’t eat enough greens,” Sasha said. “I know I don’t, so instead of me having to eat like a cup of kale and a cup of spinach, all I have to do is just drink this juice and essentially the only thing that’s been taken out of it is fiber, because it is a cold pressed juice. It doesn’t mess with the enzymes.”

Sasha said their products are as reasonably priced as possible, with the price covering the necessities to run the business, like rent for the building and insurance.

“We’re here mainly to provide a service more than anything,” Sasha said. “So our prices really do vary because some vendors ask for more for certain products, depending on what they have to put into it, like their time and everything else. Everybody has a different scale.”

“We are trying with the whole ‘bring your own container’ type things, or buy reusable containers,” Sasha said. “We’re trying to offer what we can on reusable products so that way you have a place to purchase them, and then also trying to help people just think about what they’re buying and what they’re using.”

Like many other businesses, Earth Candy Farmacy has faced challenges associated with the pandemic. The Wilsons began renting the building during the beginning stages of the pandemic, and had planned on opening in March, but eventually ended up opening in May.

Although the store’s space is small, due to large open windows and a customer limit, the Farmacy was able to open up. The business they’ve received has been great so far, Sasha said.

Looking towards the future, the Farmacy hopes to expand their offerings and get more local products into the community, continuing to support the local economy.

“The effects on the local economy are tremendous,” Sasha said. “The more local you have, the more impact you’re going to have on your community, and the more you’re going to be able to build your community and help the people within it rather than just having corporations from far away funneling all the money out of your community. It’s here, it stays here and we all benefit from it.”