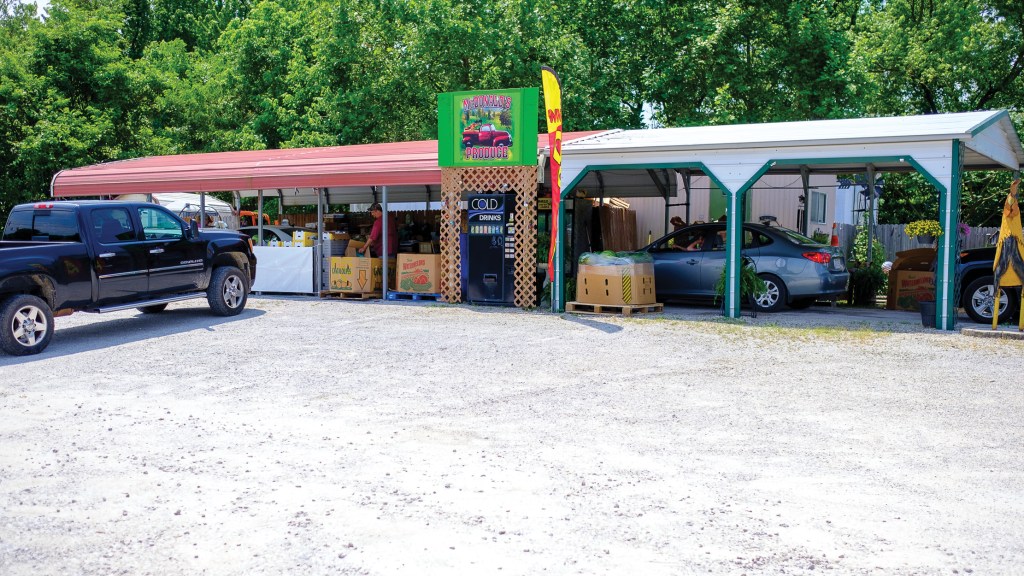 McDonald’s Produce sells fruits and vegetables from local farmers, as well as the McDonalds’ own garden. They travel south to get different types of produce during the off-season. (Photography by Jeremy Holtzapfel)

Amidst the recent pandemic, lines at McDonald’s Produce in Proctorville have been quite a bit longer than usual.

“I’m shocked at how many people we’ve been getting,” Tara McDonald, who owns the roadside stand with her husband, said. “We’ve had people a couple hours away come in, and people from Milton, Barboursville, Ironton and Portsmouth.”

McDonald’s Produce sells fruits and vegetables from local farmers, as well as the McDonalds’ own garden. They travel south to get different types of produce during the off-season.

The stand sells a variety of seasonal produce, including, but not limited to, corn, tomatoes, watermelons, cantaloupes, bell peppers, apples, peaches and potatoes.

Despite the increase in business, McDonald said, the prices they offer their customers have not increased. Corn is 50 cents an ear and tomatoes are $4 for five in a basket. Peaches are $4 a basket as well, but include six peaches.

To adapt their business to the pandemic, McDonald’s Produce has offered their fruits and vegetables through a drive-thru system where customers wait in line, pull up, have their order taken and then have their produce loaded into their trunk.

This is very different for them, McDonald says, because of the way she and her husband try to get to know their customers.

“It’s not like a one-on-one, where they can walk up to your stand and kind of hang out, talk to you and look at what you have to offer,” she said. “Right now, just the way things are set up, we can’t really let them get out of their vehicles.”

From January through May, she and her husband travel the country to places like Florida and South Carolina to get fruits and vegetables when they are not available locally.

When things become available locally, they buy from farmers, which McDonald said has led to very meaningful relationships. Knowing and doing business with them has been a great learning experience for her as well, she said.

“We’ve become friends with a lot of the older farmers, and they have a lot of wisdom that they can still give,” she said. “They’re really smart people, and you know, a lot of people don’t give them credit for it. … We purchase from local farmers such as Franklin and Susie Love and Dan and Deb Roach that grow a variety of tasty tomatoes and other produce.”

McDonald describes herself and her husband as “people-people,” something they considered when choosing their line of work.

“We like to talk to people and everything like that, and what else is better to do than feeding people at the same time?” she said.

It was also important to McDonald and her husband to work for themselves.

“We’ve always kind of wanted to work for ourselves,” she said, “A lot of our young people need to know that they can do it.”

In light of the pandemic, McDonald said she is thankful she and her husband are still able to work and stay in business, as many small businesses have been struggling. Additionally, many farmers have been struggling as well, and McDonald has seen a price increase from the farmers she purchases from out of state.

“The pricing of the stuff that we purchase, we can definitely see a price hike,” McDonald said. “One of the problems is the pickers that they use are not allowed to come into work, so they don’t have anybody to pick their produce. So, the produce is laying in the fields and … the farmers are hurting right now.”

She said she has seen farmers having trouble getting produce to market, and that this will all likely have an effect economically.

Looking ahead, she said McDonald’s Produce intends on staying in business for the foreseeable future. For the time being, customers will only be able to drive through, viewing their fruit and vegetable options through Facebook and their car windows.