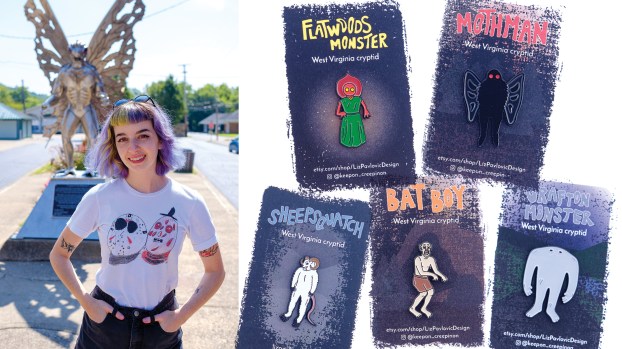 Liz Pavlovic, a graphic designer based out of Morgantown, West Virginia, runs an Etsy shop offering unique, West Virginia themed designs. One of the most popular offerings is a sticker, featuring Pavlovic’s unique interpretation of the infamous cryptid, the Mothman. The Mothman is reclined on the sticker with a furry hand on hip, with the words “Live, Laugh, Lurk,” just below, which is a play on the popular phrase “Live, Laugh, Love.” (Photography by Jeremy Holtzapfel)

Some people are frightened by tales of the Mothman, but others have a more casual relationship.

Liz Pavlovic, a graphic designer based out of Morgantown, West Virginia, runs an Etsy shop offering unique, West Virginia themed designs. One of the most popular offerings is a sticker, featuring Pavlovic’s unique interpretation of the infamous cryptid, the Mothman. The Mothman is reclined on the sticker with a furry hand on hip, with the words “Live, Laugh, Lurk,” just below, which is a play on the popular phrase “Live, Laugh, Love.”

“I went to the Mothman festival for the first time in 2017,” Pavlovic said. “One of my friends lived in Point Pleasant and invited us to come there and stay at his mom’s house and just see the festival and stuff. We did that, and it was super fun. I was just surprised at how many different interpretations of Mothman that were there, and cool [merchandise] and stuff, and I just kind of fell in love with him specifically as a cryptid.”

Pavlovic went home and was inspired to begin drawing the Mothman, the Flatwoods Monster and an array of other West Virginia-based cryptids.

The original “Live, Laugh, Lurk” sticker took off, Pavlovic said, and from there the shop’s offerings expanded to include other things based around personal interests.

A lot of Pavlovic’s work also features food and cats, and the two mixed together. Some of the food-cat items include a “Cathead Biscuit,” based off the popular Southern staple, cathead biscuits. The “Cathead Biscuit” piece is a biscuit Pavlovic drew with an adorable cat’s head on the top of the biscuit.

“I try to make stuff that I would want to buy myself,” Pavlovic said. “It’s always really cool when other people want it too, and that just covers groups of people that have similar interests that way. It’s just been really nice.”

Many of Pavlovic’s other items are also based on regional West Virginian foods.

“I love food, and discovering new hole-in-the-wall places in West Virginia, and kind of celebrating … what some people see as like everyday things, or maybe not super glamorous things, like chili dogs and pepperoni rolls,” Pavlovic said. “I like highlighting those and doing cute stuff with them, and fun things, and making them a thing of pride that people, especially outside of the state, can buy and wear, like a pin.”

“I’ve gotten a lot of good feedback, which I mean has all been incredibly nice and kind of overwhelming,” Pavlovic said. “It’s more than I expected when I started doing it, for sure.”

Amidst the COVID-19 pandemic, Pavlovic has focused more on selling products online, as many stores that sold the products in a physical space are now closed.

Additionally, Pavlovic is focusing on fun stuff that there wouldn’t normally be time for, and is keeping an optimistic, positive approach.

Pavlovic’s work has imagined the Mothman as a cryptid with fellow cryptid friends, one of his closest being the Flatwoods Monster, which Pavlovic said is gaining in popularity in the cryptid community.

“As a visual artist in West Virginia, and generally with the climate of everything right now, I just wanted to do something with the names that I can to try to raise awareness for those issues,” Pavlovic said. “So, I made those stickers so people can show their pride for those things however they want to and buy them, but more importantly, so I could donate all the proceeds to a few different causes.”

The stickers, along with the rest of Pavlovic’s products, can be purchased at LizPavlovicDesign on Etsy.

By Mark Williams Eddie Austin is a builder. As the owner and founder of EA Woodworks based in Hamlin, West... read more