Chillicothe to be featured in upcoming production of ‘Our Town’ 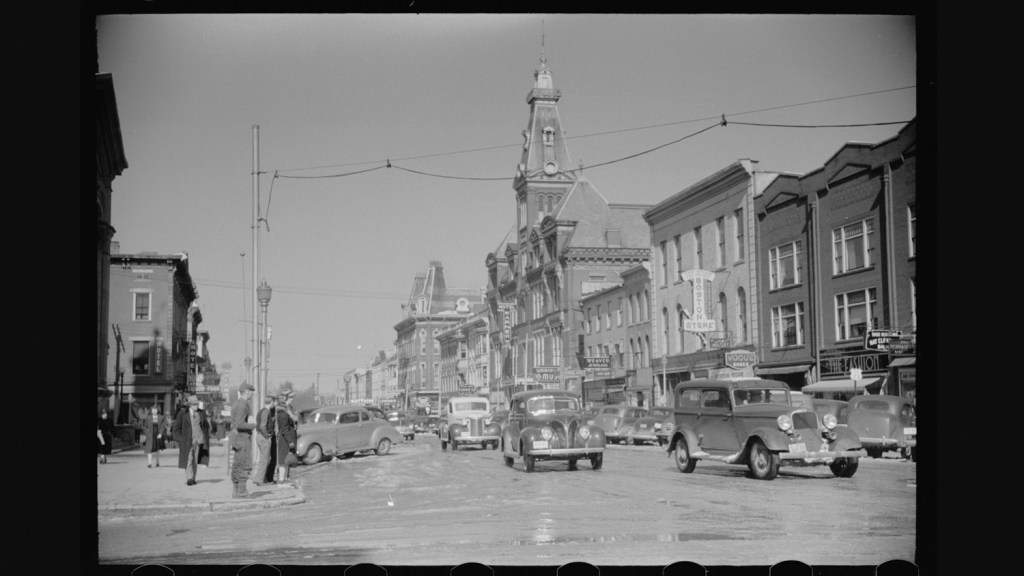 Downtown Chillicothe is seen on a winter day in this undated vintage photo. The town will be featured on an upcoming edition of WOUB’s “Our Town” (Submitted photo)

ATHENS — The First Capital Rotary in Chillicothe knows all about the importance of honoring their hometown’s history — just look at its name.
But, some members were surprised by a few things they learned from WOUB producer/director Evan Shaw in December.

Shaw and WOUB Community Engagement manager Cheri Russo spoke with the group over Zoom to talk about the upcoming production of Our Town: Chillicothe.

Chillicothe was the first capital of the state of Ohio and is known for its presence on the State of Ohio seal with a circular coat of arms that depicts a Chillicothe sunrise.  But, the film will also examine many other unique aspects and people of Chillicothe including how it is home to the oldest newspaper west of the Allegheny Mountains, the influence of the papermaking industry, how World War I contributed to the city’s growth.

Notable residents will also be featured, like cartoonist Billy Ireland, who lovingly lampooned the city of Columbus each week in the Columbus Dispatch, inventor Alexander Bonner Latta, who produced the first practical steam fire engine that was successfully used as a routine part of a city’s fire department equipment, and Former U.S. First Lady Lucy Webb Hayes, who was the earliest first lady to have a college degree.

“As we produce each Our Town documentary, we like to speak with area service organizations and community members to tell them about the unique things we are discovering in our research, but also to learn about parts of the community’s history that haven’t been widely told,” Russo said. “We truly appreciate the knowledge we gained from the members of the First Capital Rotary.”

“As a proud southeastern Ohio native, I’m still stunned that every time I start to work on an Our Town, that I learn something I did not know,” Shaw said. “It’s so exciting to be able to bring the stories of these communities to life and show the people who live there all the reasons they have to be proud of where they are from. It was great to gather new knowledge from the rotary.”

Shaw is a 14-time Emmy-Award winner and a southeastern Ohio native. Previously highlighted communities in the Our Town series include Lancaster, Pomeroy, Nelsonville, Jackson, Athens, Morgan County and most recently, Gallipolis. Shaw started his research on Chillicothe early this summer and is very excited about the eighth episode of the series.

WOUB plans to premiere Our Town: Chillicothe at a free public screening the fall of 2021. More information on the date and location will be announced later.

Vaccination Phase 1B to begin in Lawrence County