Hanging up her shears 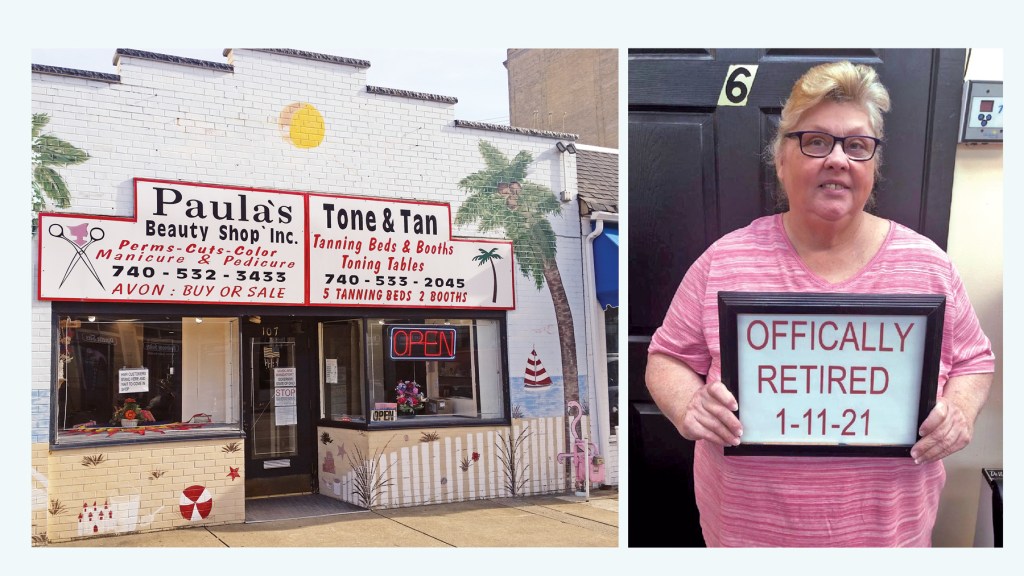 Paula Bellomy is retiring after 47 years

After more than four decades, Paula Bellomy is hanging up her shears.

She babysat for her cousin, who was a hairdresser, and thought “it looked fun.”

At an Ironton High School job fair, she talked to Ironton Beauty College and got a $100 scholarship from them.

“Back then, it only cost $500 to go to beauty school,” Bellomy said. “So, that summer I ended up working for Montrosso concession stands at the fairs. And I raised almost all my money doing that and babysitting.”

She got her license in July 1973 when she was 19 years old and her first job was at MaryLou’s Hairdos.

In 1976, she married Bob Bellomy and they agreed that she would work for a couple years and then she would retire to be home with the kids. She said that didn’t work out because he would get laid off when work slowed down at the railroad company.

So Bellomy continued to work, heading next to Kathy’s Beauty Shop where she worked for eight years before starting her own shop, Paula’s Beauty Shop/Tone & Tan, in west Ironton.

This time when Bob got laid off, he decided to go to barber school.

“We both worked in that same building together and when I got another place (on Center Street), he got his own place and was working there and at the railroad,” Bellomy said.

He was working both jobs when he passed away in 1995.

In 2000, she moved Paula’s Beauty Shop/Tone & Tan to Second Street where it has been ever since.

“I saw a ‘For Rent’ sign in the window and I went and talked to Jim at Iron City and his uncle owned it. I told him that for what I had to pay to re-model it and everything, I can’t rent. Will you sell me the building? And he did,” Bellomy said. “That’s why I’ve been there for 21 years.”

Bellomy can’t say how many heads of hair she has cut and styled over 47 years.

“I guess at least 10,000,” she said. And while she was always happy to make her customers look good, there was one time of the year she didn’t look forward to.

“Prom season. It takes a lot of work, the up-dos, the basket weaves and the panels and all that stuff,” Bellomy said.

Bellomy said she decided it was time to retire after a knee replacement surgery in September.

“I’m 65, I had the knee replacement and I’ve been wanting to retire for the past couple of years so I could travel,” she said. And an opportunity came up after discussions about selling her shop to some hairdressers. “They were interested in buying the shop, so it seemed like a good time.”

As for what she will miss in her retirement, the answer was simple — the people.

There are of course, her co-workers at Paula’s Beauty Shop/Tone & Tan.

“They have worked longer than I have. Helen McGlone has worked 49 years and Linda Gore has worked for 57,” Bellomy said. “I actually worked for Linda’s mother in the building I’m in now, so we say we have come full circle.”

Another good friend is hair salon owner, Lou Pyles, who owns Lou’s Style Shop. The pair went to high school together and after graduating from beauty academy, they both worked at Kathy’s Beauty Shop in 1975.

“We were in each other’s weddings. We stood up for each other,” Bellomy said. “Sometimes, you have good friendships when you work together and we have remained friends over the years.”

“She graduated right after me. We worked together off and on many years, then got our own shops,” Pyles said. “She’s a great person and I wish her only the best.”

And of course, she will miss visiting with her customers.

“A lot of them have become family,” Bellomy said, adding that when she posted about her retirement on Facebook, she got teared up over the outpouring of people commenting nice things. Some of them were talking about their mothers going to the shop and other fond memories. “And I have some customers I’ve had since 1976. There is a long history of weddings, funerals and all kinds of events that I have gone through with them over the years. And they have been there for me too.”

Bellomy said that as soon as the pandemic is over, she plans to travel with her school and church friend, Juanita Dalton. They’ve traveled to places like Alaska and Michigan. And they have a new vehicle to do it in, since Bellomy had to buy an SUV to replace her car as she was having issues getting in and out of the car with the new replacement knee.

“I went by her house one day and I said “Look what you get to drive,’” Bellomy said. “So, we’re planning on heading out west. We haven’t been there before.”