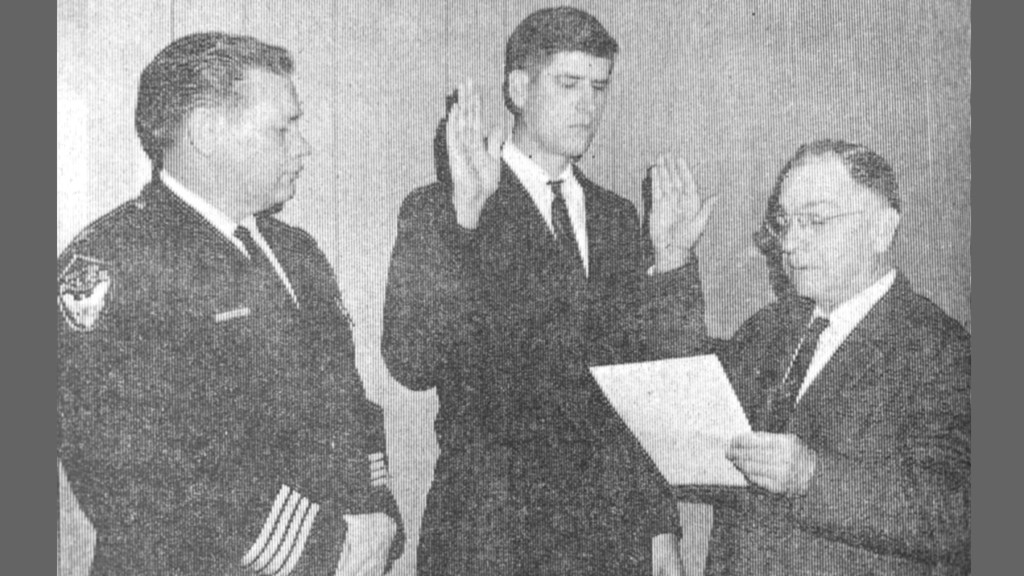 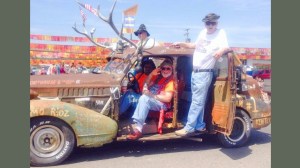 Former Ironton police chief Rodney McFarland, right, is seen on a truck for the El Hasa Shriner hillbillies. McFarland, who was with the city’s police department for 45 years, died Jan. 12, at age 80. (Submitted photo)

Those who knew Rodney McFarland recall a good man who provided the city’s police department with strong leadership in the 1990s.

“He was very firm, but fair,” she said of the man who first hired her in 1996. “He was a great educator and he loved to teach new things to the guys. He loved to try different things and educate them on new ways of doing stuff.”

Wagner said she had known McFarland for a long time before joining the force, having gone to school with his children.

“It was a great loss for us when he retired and so much experience went out that door,” she said.

Wagner was one of five hired at the time, three of which, also including Joe Ross and Anthony Forest, are still with the department.

Ross, a detective captain, said their hire was part of an increase in officers as part of the crime bill under the administration of President Bill Clinton.

“Rodney had petitioned for five or six more officers,” he said of the community police grant. “He worked hard on getting that.”

Ross described McFarland as part of the “old school” of the force when he arrived.

“He was a good chief, respected the public and the officers respected him,” Ross said. 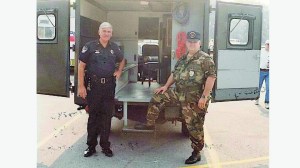 McFarland was first sworn in as an officer in November 1966 by Chief Eugene Markel.

Also sworn in that week was Grover Carter, who worked with McFarland for more than three decades.

“I was sworn in on a Monday and he was a Friday,” Carter, who served as a captain and patrolman, said. “But we started work on the same day.”

“We were pretty close,” he said. “We took the sergeant’s test, the captain’s test and the chief’s test together.”

McFarland and Carter had been on the force less than a month when tragedy struck, as Markel was shot and killed while attempting to stop a jailbreak at the Lawrence County Jail on Dec. 2, 1966.

Carter said he and McFarland worked together often, doing things such as regular patrols and responding to burglaries.

Carter recalled one case that they both worked on, that of Harold Riffe, for whom McFarland filed a missing person’s report in the 1980s.

More than a decade passed, in which Riffe’s son also came to work for the department for a few years. In the early 1990s, Carter was responding to a car that had gone into the river.

A wrecker and a diver were attempting to pull the vehicle out of the river, when they brought up a vehicle’s bumper.

Carter said it did not match the car he was trying to recover and they realized another vehicle was under the water. They were able to get the plate numbers of the car.

When he got back to McFarland, he showed the information to him.

“He immediately remembered,” Carter said. “It was Harold Riffe’s car.”

While the car that was under the water for more than a decade was found, Carter said they never were able to find out what became of Riffe.

Carter recalled many good memories, including hunting and going to auto races with his friend.

“Rodney was a great guy,” he said. “He was one of the best the department ever had.”

McFarland, who was born in Ashland, was son of the late John Charles and Viola Mae Fain McFarlin. His last name was spelled differently due to a clerical error when his birth certificate was filed, his brother, Ray McFarlin, said.

McFarland graduated from Ironton High School in 1958 before enlisting in the United States Air Force. He served for eight years, including as a military police officer. He was also a member of the Seabees, the construction battalion of the U.S. Navy based out of Huntington, where he worked on engineering projects.

“He traveled all for that,” McFarlin said.

McFarland was a member of Waterloo Lodge #532 F&AM and belonged to the Southern Ohio Poultry Association, where he exhibited show chickens. He won countless trophies and ribbons and earned the status of Master Breeder.

He was also well known in the region as a member of El Hasa Temple and Hillbilly Clan #1 and Outhouse #8, where McFarlin is also a member.

He said McFarland was with them when they started as part of the El Hasa Hillbillies in Ashland and then was part of the launch of Outhouse #8 in Ironton.

The groups, part of the Shriners, raise funds to take children to the group’s hospitals and have been a staple of events such as the Ironton-Lawrence County Memorial Day parade, Old Fashion Days in Greenup and other parades in the area.

“And he was there for all the kids’ activities,” McFarlin said.

The two brothers were proud of their Scottish heritage, were members of Valley of Cincinnati Scottish Rite and traveled to events such as the Highland Games and Grandfather Highland Games in several states.

McFarland said his brother was an avid reader and recalls receiving books from him on ichthyology and ornithology.

“He would hand it to me and tell me to open to a page and then he’d tell me everything about the fish or bird,” he said. “It was unbelievable. He was very knowledgeable and just a likeable guy.”

Wagner said the loss of McFarland was hard for the community and her department, noting that he would still drop by regularly and she saw him often at events.

“He’ll be missed by a lot of people and I’ll miss him a lot,” she said. “He was a great human being.”

He is survived by his son, Rodney, brothers, Raymond, Jeff and Greg McFarlin; grandchildren, great-grandchildren and extended family.

Services took place on Saturday and in lieu of flowers, donations were asked to be made to the Hillbillies, where they will go to the transportation fund to take children to the hospitals.