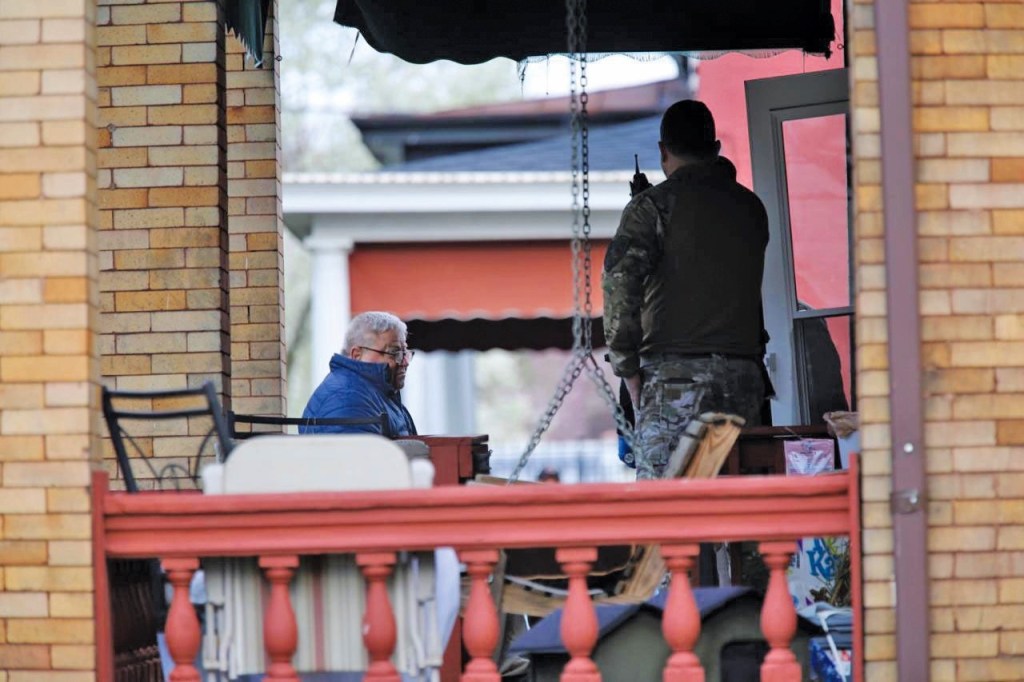 Mike Mearan sits on deck in Portsmouth, surrounded by police on Wednesday. The Ohio Attorney General’s Bureau of Criminal Investigation is asking the public for information about Mearan in their investigation.(TNS/Liz Dufour / The Enquirer)

PORTSMOUTH — A Portsmouth attorney who was indicted last year on human trafficking and prostitution charges is representing himself in court and the state is not happy with that.

The case has been assigned to Patricia A. Crosgrove, a former Summit County Common Pleas judge who retired in 2011 and is assigned to cases by the Ohio Supreme Court as a special judge.

The case is still in the pre-trial hearing phase with no trial date set yet.

In November, Mearan gave the court notice that he would be representing himself in the trial to be held in Scioto County Common Pleas Court. On Jan. 20, the state filed a motion to deny Mearan’s request to represent himself.

In their objection, the state wrote that it “continues to object, for several reasons. First, Defendant indicated he may be sitting as “co-counsel,” which is considered hybrid representation and is strictly prohibited by the Ohio Supreme Court. Second, the Defendant is attempting to manipulate the rules of discovery and the victims in this case, and should not be permitted to represent himself on those grounds. Third, Defendant is still subject to the Ohio Rules of Professional Conduct and his pro se request creates a conflict of interest, as he has represented all of the victims and many of the witnesses in prior court proceedings.”

Judge Crosgrove will have to decide on the matter.

Senior assistant attorney general Joel T. King, of the Ohio Attorney General’s Special Prosecutions Section, has been assigned as the special prosecutor in the case.

A call to the Ohio Attorney General’s office seeking comment about Mearan representing himself was not returned by press time.