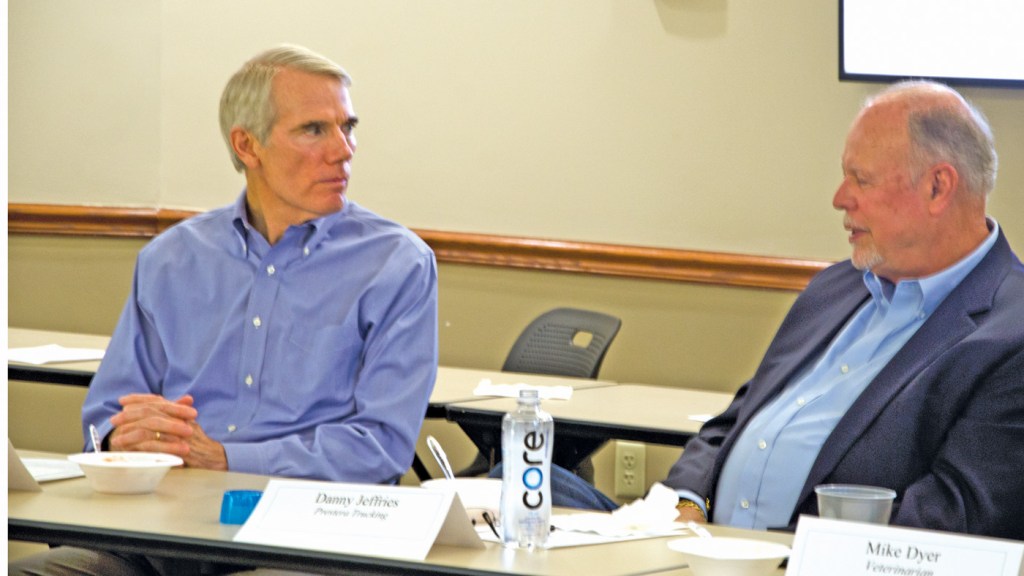 U.S. Sen. Rob Portman, left, listens during a meeting at the Lawrence county Chamber of Commerce headquarters in South Point in 2019. Portman, who is in his second term as Ohio’s junior senator, said on Monday that he would not seek re-election to his seat in 2022. (The Ironton Tribune | Heath Harrison)

WASHINGTON, D.C. — U.S. Sen. Rob Portman, R-Ohio, said on Monday that he will not seek re-election in 2022, setting in motion a process that could make 2022 a lively year on Ohio’s ballot.

Portman, who has served two terms as Ohio’s junior senator, said he was making the decision now in order to give his fellow Republicans more time to field a candidate for the race.

“I feel fortunate to have been entrusted by the people of Ohio to represent them in the U.S. Senate,” Portman said. “Today, I am announcing that I have made a decision not to run again in 2022.”

The senator said he planned to stay active with a full agenda for the remaining two years of his term.

“This doesn’t mean I’m leaving now,” Portman said. “I intend to use that time to get a lot done. I will be the top Republican on the Homeland Security and Governmental Affairs Committee, and I have a number of oversight projects and legislative initiatives I’m eager to get across the finish line. Over the next two years, I look forward to being able to focus all my energy on legislation and the challenges our country faces rather than on fundraising and campaigning.”

Portman also spoke of the divisive atmosphere of today’s politics.

“We live in an increasingly polarized country where members of both parties are being pushed further to the right and further to the left, and that means too few people who are actively looking to find common ground,” he said. “This is not a new phenomenon, of course, but a problem that has gotten worse over the past few decades.”

The news of Portman’s decision came a surprise to many in the state, including State Rep. Jason Stephens, R-93.

“I did not expect it,” Stephens, who serves as chair for the Lawrence County Republican Party, said on Monday.

“Senator Portman has served two terms, as well as in the Bush administration and has always been a solid Republican. It was definitely a surprise.”

Stephens said it would make 2022 an interesting year, given that the governor, all statewide officials and all statewide representatives will face the voters.

He said, in Portman’s case, there was “no clear heir apparent” and he expected many, from statewide officials to former officeholders, to throw their names into the race.

“Anytime you have an expected or unexpected vacancy, it creates a wide range of people who are interested,” he said.

Some of the names on the Republican side who political observers have said might be interested in the seat include Lt. Gov. Jon Husted, U.S. Reps. Jim Jordan, Michael Turner and Steve Stivers, former state Treasurer Josh Mandel and state chair Jane Timken.

Locally, U.S. Rep. Bill Johnson, whose district covers southeast Ohio, including Lawrence County, said he was weighing a run for the Senate seat.

Johnson released a statement on Monday, stating he has recently been asked “to consider additional ways to serve the hardworking people of the great state of Ohio.”

“I am seriously considering this opportunity, and over the next few weeks I will talk to my family, friends and supporters to determine if this is the right time and the right opportunity,” Johnson said.

Should Johnson run in the primary, he would have to give up his U.S. House position, which is on the same ballot, and could trigger a competitive race for that seat, as well.

Stephens, whose wife Juli serves as Johnson’s field director in the region, said he was optimistic that his party has “an extremely deep bench” of possible candidates for Portman’s seat.
He also pointed out that the 2022 races will take place after redistricting for legislative and U.S. House races, with district lines being redrawn before the campaign.

Officials around the state paid tribute to Portman, following his announcement.

“Rob Portman has been a champion for Ohio and our nation during a career that spans many years of honorable service in the U.S House, the Bush Administration and now in the U.S. Senate,” Johnson said in a news release. “I consider him a friend, and wish him and his family the very best as he finishes his final term.”

“Rob and I have worked together on issues that matter to Ohioans, from protecting the health of Lake Erie, to better enforcing our trade laws, to helping Ohioans who are struggling with addiction,” he said in a news release. “We’ve not always agreed with one another, but we’ve always been able to put our differences aside to do what’s best for our state. Connie and I thank Rob for his career of public service and wish him and Jane well.”

While Gov. Mike DeWine said Portman has “worked tirelessly on behalf of Ohioans.”

“Senator Portman has been a key partner on helping Ohio with federal COVID-19 relief and other pandemic-related issues,” DeWine said. “Senator Portman and I have had similar policy priorities to help Ohio families, from tackling the opioid crisis and the scourge of human trafficking to protesting Lake Erie and Ohio’s other natural wonders. Fran and I wish Rob and Jane and their family the best in their future endeavors.”

Portman, who previously served as U.S. Trade Representative, and director of Office of Management and Budget under President George W. Bush, was elected to the Senate in 2010, replacing the retiring Republican George Voinovich.

He was re-elected in 2016, defeating Democratic former Gov. Ted Strickland for the seat.