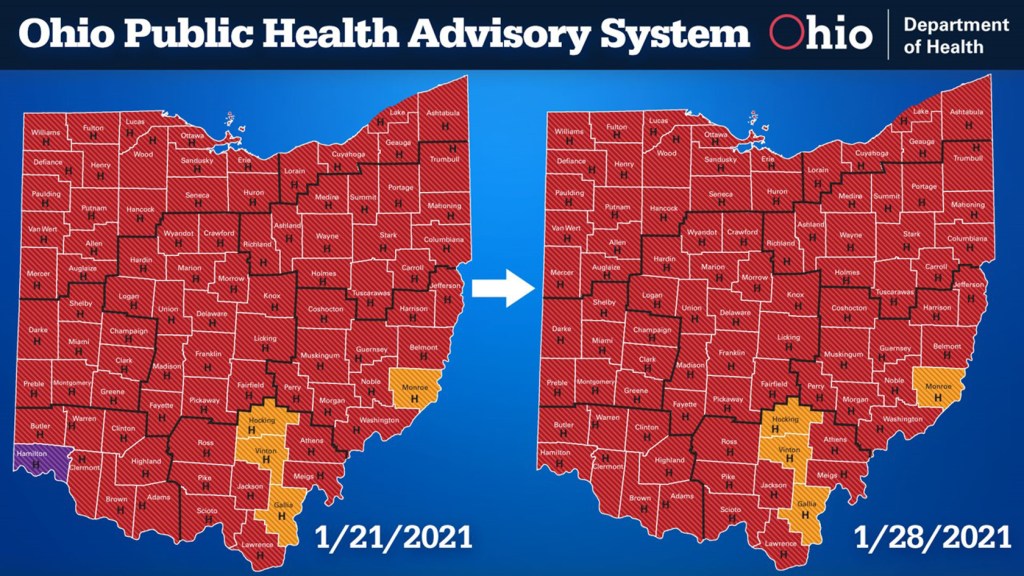 Vaccinations begin for ages 70 and up on Monday

The sole change was that Hamilton County, which had been the one county listed at Purple Level Four, the most severe designation on the four-tier system, had been moved back to Red Level Three.

“Hamilton County is no longer purple,” Gov. Mike DeWine said. “The rest of the state remains the same.”

Locally, Lawrence Jackson and Scioto Counties were listed at Red Level Three, while Gallia County was one of four counties still at Orange Level Two.

Lawrence County has had two stints at the Level Three designation. The current and longest listing at that level began on Oct. 8, with no change for 16 weeks.

All counties in the state are currently listed with an “H,” indicating high incidence of the virus.

DeWine said the state’s curfew was being moved back following an improvement in hospitalization numbers.

“COVID-related hospitalizations are at 2,829,” he said. “Tonight we start the 11 p.m. curfew because we have had seven days in a row below 3,500 hospitalizations. We will look at these numbers again in two weeks to potentially move to a midnight curfew or eliminate the curfew completely.”

DeWine also provided reminders of key dates on the state’s Phase 1B of vaccinations.

Those 75 and older have been eligible to get a vaccine since Jan. 25, as well as those with severe congenital, developmental and early onset medical disorders.

Beginning Monday, those 70 -75 will also be eligible, as well as employees of K-12 schools who wish to return to in-person or hybrid learning.

On Monday, Feb. 8, those 65 and older will be eligible to receive a vaccine.

Those seeking a vaccination locally can send a message to the Lawrence County Health Department’s Facebook page, facebook.com/lawcohd.org, with place of business and phone number where you can be called.