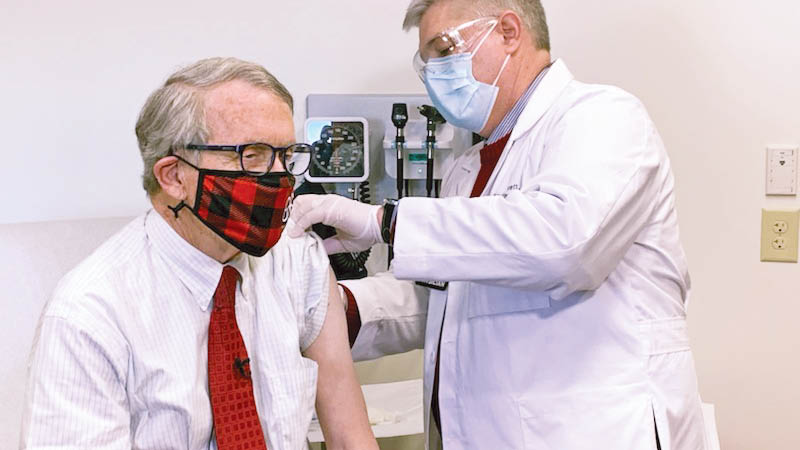 The couple were eligible because both are older than 70, the age group that could receive vaccines in Ohio beginning this week under the state vaccination plan. DeWine, a Republican, had said previously he would not cut in line for the shot but would wait his turn.

The Pfizer dose was administered by Dr. Kevin Sharrett in his southwestern Ohio office. Sharrett said he is frequently asked about the vaccine’s safety. The vaccine is not only safe, it’s a better choice than coming down with COVID-19, Sharrett said.

“The positive benefits of taking the vaccine by far outweigh any kind of negative to the vaccine,” he said. No serious adverse reactions have been seen among the thousands of doses given locally, Sharrett said.

More than 850,000 people in Ohio have received at least the first dose of the vaccine as of Monday, or about 7 percent of the population, according to the Ohio Department of Health.

In addition to people over 70, the state also has started rolling out vaccines to employees in some school districts that are having in-person classes or aiming to reopen within a few weeks.

A teachers union sued to try to delay Cincinnati Public Schools’ plan to resume a hybrid model of in-person and distance learning, citing health and safety concerns. But a Hamilton County judge concluded the decision was within the school board’s authority and dismissed the complaint Monday, allowing the district to start bringing students back to classrooms Tuesday.