Ironton linebacker en-Deere-s himself with Tiffin 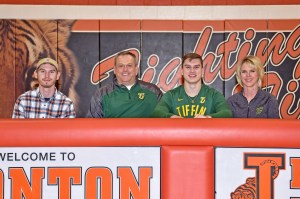 ‘Deere’ Tiffin University, Cameron Deere has made it official with his signature to continue his football career as a student athlete for the Dragons.
“I’m used to a winning culture and I really liked the coaches. They want to win,” said Deere on what won him over.
The senior played the “Will” linebacker position alongside Reid Carrico at Ironton and will play a similar linebacker role for the Dragons in their 4-2-5 defensive scheme.
A two-time first team all-district and two-time All-Ohio selection, Deere recorded 46 total tackles last season and got to the quarterback for 3 sacks in their shortened season. The hard-linebacker also forced 5 fumbles while recovering one for 17 yards.
Trent Hacker will be joining Deere at Tiffin and when asked if Deere will be looking to hit Hacker running across the middle at practice as they will be on opposite sides of the ball, Deere said, “I’m laying him out, no hesitation. First chance I get I’m going after him.”
All jokes aside, the 5-foot-11, 190-pound Deere is happy to have a teammate that he that he played with at the same high school.
“I’m really happy he is going. We are going to room together and it will be good to have someone to rely on when we are homesick,” said Deere.
The inside linebacker made the final decision to go to Tiffin over their rival Findlay and said most of his interest was received from other schools in the same league, the Great Lakes Intercollegiate Athletic Conference (GLIAC).
He plans to major in exercise science to set himself up for Physical Therapy school where he hopes to own his own practice one day.
Deere is prepared for the next level and said, “Coach Pendleton knows all there is to know about the next level and we have played in big games. I don’t think the stage is going to be too big for me. I’m prepared.”