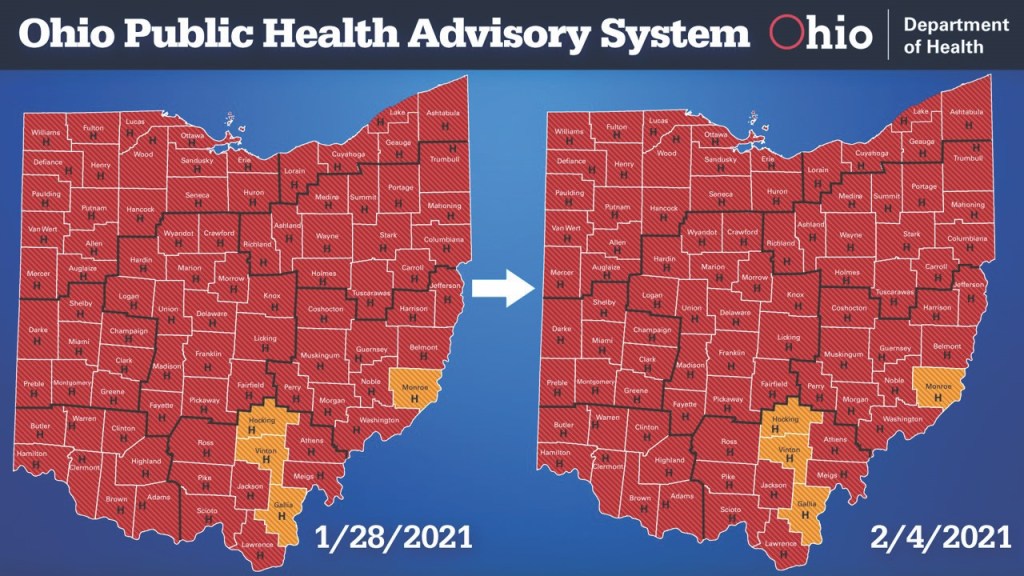 COLUMBUS — The state’s COVID-19 alert map saw no change in its latest update on Thursday, with 84 of Ohio’s 88 counties listed at Red Level Three. Hamilton County is the sole listing at Purple Level Four, the most severe designation on the four-tier system.

Locally, Lawrence, Jackson and Scioto Counties are listed at Red Level Three, while Gallia County is one of four counties still at Orange Level Two.

Lawrence County has had two stints at the Level Three designation. The current and longest listing at that level began on Oct. 8, with no change for 17 weeks.

All counties in the state are currently listed with an “H,” indicating high incidence..

At his news conference on the pandemic on Thursday, DeWine said hospitalizations are down, which could lead to the lifting of the state’s curfew, currently set at 11 p.m.

“There are 2,252 people in our hospitals right now because of COVID, but these numbers are dropping,” DeWine said. “A week from today we’ll look at these numbers again, and if the trend continues, we may be able to remove the curfew if numbers stay under 2,500 for seven straight days.”

The state also listed its county-by-county numbers for highest occurrence.