Judge rules her softball verdict is Ohio Valley U. 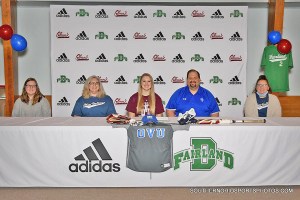 PROCTORVILLE — Libby Judge called it a “family tradition” after signing her National Letter of Intent to play softball at Ohio Valley University on Friday.
“My mom went there and so did both of my grandparents, so I’m very familiar with the campus,” said Judge who spent the first four years of her life in Parkersburg.
She credited her decision to family roots over the likes of Harding University in Arkansas and Freed-Hardeman University in Tennessee.
“Libby is an all-out player and student. I’ve coached her since sixth grade and she is a great all-around player. She catches for us and will play some third base and shortstop. She also brings a strong bat and will be a big asset to the team,” said Fairland softball coach Scott Wilson.
The senior is currently a member of the Fairland Lady Dragons basketball team, but is excited for this coming softball season and hopes to make a big impact. She hopes to step on campus next Fall with a chance to play right away as a freshman.
“I’ll probably play third base, but I will play anywhere they tell me,” added Judge.
She gave recognition to all the coaches she has had along the way including her travel ball teams which include the West Virginia Extreme and American Thunder.
Judge also gave a shout out to her parents, “My mom and dad for taking me to every game and all the expenses.”
The heavy hitter soon to be a Fighting Scot plans to major in biology and attend grad school to become a physical therapist.