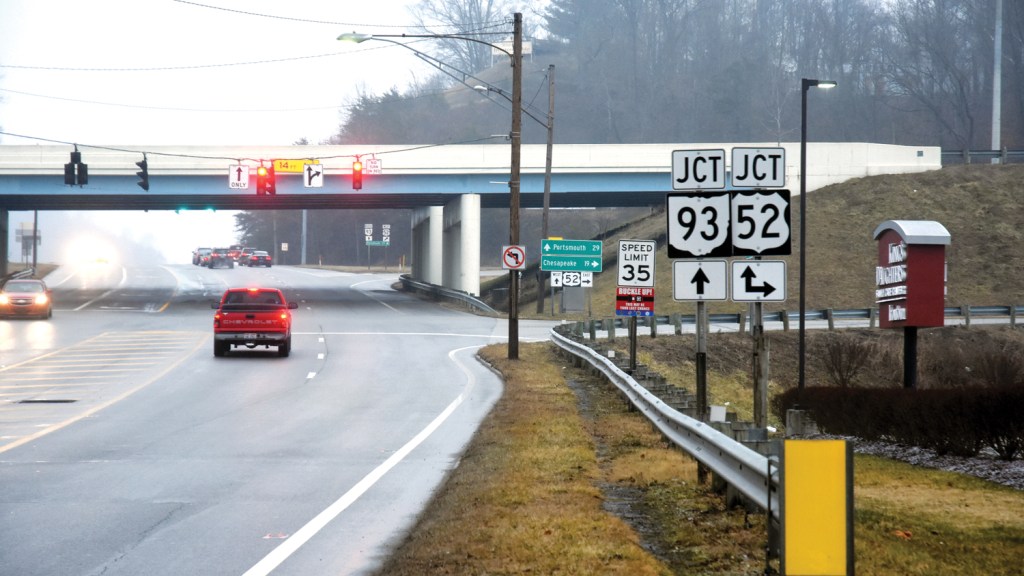 The Ohio Department of Transportation hosted a public comment meeting on Tuesday to discuss a roundabout project for the intersection of U.S. Route 52 and State Route 93 in Ironton. The agency said the number of accidents on Route 93, higher than the state average, was the reason for the project. (The Ironton Tribune | Heath Harrison) 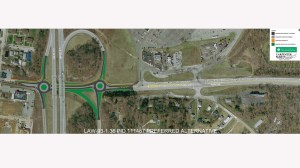 This aerial view depicts a proposed roundabout project for the intersection of U.S. Route 52 and State Route 93 in Ironton. Orange represents where new sidewalk would be constructed. Green represents areas of existing pavement. (Ohio Department of Transportation)

CHILLICOTHE — The Ohio Department of Transportation hosted a public information meeting on Tuesday, presenting traffic studies for Ironton and Lawrence County, as well as seeking public comment on a proposed roundabout for the intersection of U.S. 52 and State Route 93 in Ironton.

The meeting opened by presenting the travel studies, which looked at where travel times were less reliable in the main transportation corridor through the county, finding delays and backups on U.S. 52 near the bridges to Ashland, Kentucky, in the Burlington/Macedonia area, in Proctorville and near Grandview Drive on U.S. 52.

These studies were done in order to prepare for traffic changes from future projects, such as a new river crossing east of Huntington, as well to consider the opening of the Portsmouth Bypass, which occurred in 2018, Selhorst said.

The team also looked at where crashes are most frequent, finding this to be the case in the Burlington/Macedonia area and the Charlie Creek area in Chesapeake, among others.

As for long-term issues, they forecast congestion could be an issue for the Ashland bridge crossing, the Coal Grove interchange of U.S. 52, as well as Burlington and Chesapeake.

But the bulk of the meeting focused on the proposed roundabout project for Ironton, which is currently in a public comment period.

The plan calls for the construction of two single-lane roundabouts on State Route 93, one on the north and south sides of the U.S. 52 interchange, replacing signalized intersections. These would be designed in 2022, with construction expected to start in May 2023 and wrap up that October.

The group said, due to the ongoing traffic issues and a high number of crashes, the intersection had been included in several studies, including the 2019 Governors Top Safety Location List.

They said during a four-year period, from 2013-2017, more than 60 crashes had occurred there, with 73 percent of those crashes being rear end collisions, and another 33 percent injury-related collisions.

“This exceeds the state average for similar intersections,” Carpenter said.

He said they found congestion was the common cause of the crashes, between the hours of 3-7 p.m., when volume was the highest.

“84 percent had dry pavement and 80 percent were in daylight,” Carpenter said. “There was no adverse weather.”

Two proposals were made to improve the situation: a signal upgrade for the intersection and installing roundabouts.

Key issues studied were whether roundabouts would be a good fit for the location, whether they could accommodate tractor trailers, the impact on pedestrians crossing the highway and whether they can be constructed in the existing right of way.

After doing a cost-benefit analysis, the group said the roundabouts were the preferred solution and, while more expensive, they were justified by an expected substantial decrease in crashes. Funds for the project have been approved by ODOT.

They said studies have shown that roundabouts lead to a 48 percent reduction in all crashes and 60 percent drop in fatal crashes. This is due to the reduced speeds in the roundabouts and their approaches, they said.

Due to the lack of a need to cross lanes of traffic, they said the flow of traffic is better, with drivers all moving in the same direction.

They said roundabouts are also more beneficial to the environment, with the continuous flow of traffic leading to less idling and emissions.

After this presentation, they opened it up to comments, taking feedback from area residents via email and voicemails.

One man, who identified himself as a truck driver, asked them to consider changing the design of the interchange from U.S. 52. The westbound lanes differ from a traditional diamond interchange, using a loop structure.

It would be far more efficient and could handle more traffic than we currently see today,” the caller said.

Wetzel said, while that was not a part of this study, reconfiguring the interchange was not off the table and could be studied in the future, though the roundabouts and crashes on State Route 93 were a separate issue. She said the interchange design on U.S. 52 westbound came about due to steep rocky slopes on the north side of the highway, which made construction of a diamond interchange difficult.

A few callers said they worked at or were connected to The Hills shopping plaza on State Route 93, on the north side of the interchange. One said she feared the roundabouts could lead to more accidents for those visiting the plaza.

Wetzel again pointed to studies that showed the opposite to be the case and said crashes would be reduced.

“It is a significant safety improvement,” she said.

She also discussed the situation for pedestrian walking to the shopping center. She said the construction of a five-foot sidewalk along the roundabouts would add to safety. She said this would only require one pedestrian crossing and, at that point they would only be dealing with traffic coming from one direction.

“Everybody going through would be turning right,” she said.

Some callers expressed concern over what the construction would mean to businesses at The Hills, fearing State Route 93 could be closed.

Wetzel said this would be addressed in the design phase next year. She said the goal is to keep Route 93 open at all times. She said it was possible the ramps to and from U.S. 52 could be closed for small durations, but, in this case, the goal would be for only some of the ramps to close. She said any closures would be announced well in advance.

Some callers questioned the number of crashes, stating that they had not seen many in the area.

The group said the figures came from the Ohio State Highway patrol and, as these only included crashes where police were called and did not include “minor fender benders,” if anything, they are underreporting the situation.

“It was substantial,” Carpenter said. “That’s why we looked at it.”

Council member Chris Haney said the city has nothing to do with the roundabouts, since it is a state project.

He said he had heard a lot of negative feedback about the roundabouts from residents but he thought that it was just because they may not be used to them.

“A lot of people who have traveled for business purposes and other purposes and are familiar with roundabouts seemed really positive about it,” he said.

He added that that he has heard a few people say that the South Point roundabout had some problems, but he has traveled up there for basketball and he didn’t have any problems with that roundabout.

Haney said he doesn’t know if the problem is because it is new or if people have had trouble navigating roundabouts, but he said the people who have had experience with roundabouts, more often than not, had the positive feedback.

Video of the ODOT public information meeting is available on the project page at https://publicinput.com/P8162.

Once the comment period is closed, a summary of comments will be published on the project page.