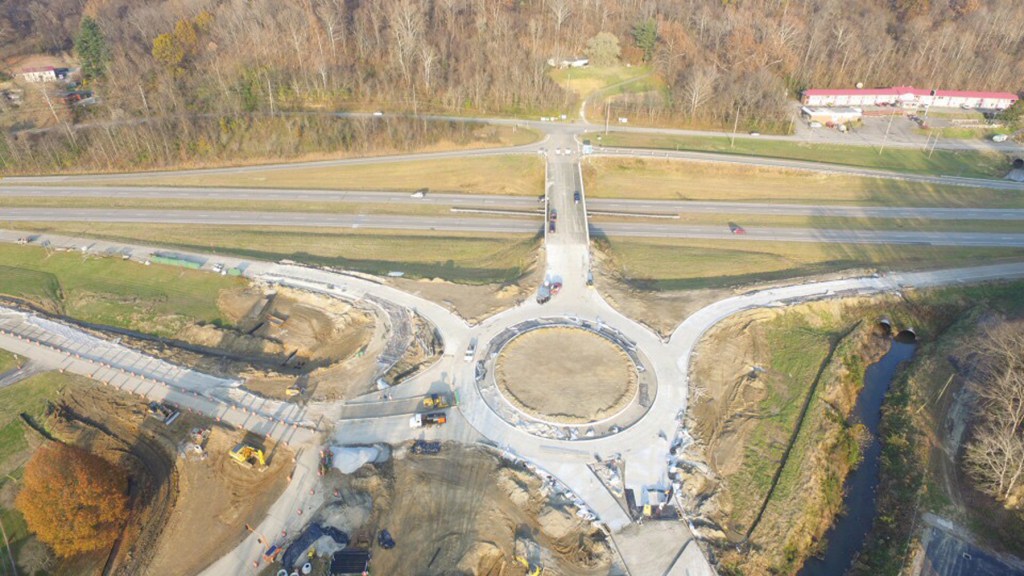 This photo, taken by aerial drone, shows the Solida Road roundabout in South Point under construction in 2018. Opening on Dec. 31 that year, it was the first of its type in Lawrence County. (Mike Clay/Submitted photo)

Project was first of its kind in county

SOUTH POINT — When the Solida Road roundabout opened in the village of South Point in January 2019, it was the first of its kind in Lawrence County, with the nearest one located in Athens.

As the guinea pig for the project type for the county, South Point residents know what Ironton can expect should the Ohio Department of Transportation move forward with a proposed double roundabout for the intersection of U.S. 52 and State Route 93.

Gaskin, when interviewed by The Tribune this week, said since its opening, navigating the roundabout has been easy for residents.

He pointed out that the project was proposed by ODOT and the village did not pay for it. He said the construction period was “excruciating to get through,” with the Solida Road interchange being closed several months.

“But, all things considered, it’s a breeze to go through now,” Gaskin said. “The traffic flow is excellent. Last count, we had 6,000 vehicles a day go through our little village.”

Gaskin said he was confident ODOT had a plan to keep things moving at the interchange in Ironton during construction. At an informational meeting on Tuesday, ODOT officials said they would likely keep State Route 93 open during the construction and would minimize any closures to the U.S. 52 interchange.
Gaskin said the roundabout has been safe for the village, with only one or two accidents in the past two years that police had to be called to.

“It’s not dangerous to go through and there have been no real issues,” he said.

He did say there was a “learning curve” for drivers using the roundabout and that they must remember that those already in the roundabout have the right of way.

“You have to learn and follow roundabout etiquette,” he said.

He said South Point’s roundabout differs from most of its kind, in that it has five entrances and exits. He said, in the time it has been in place, he has had to wait only a handful of times for traffic.

“And they are much less costly to maintain,” he said, comparing them to an intersection with traffic lights.

The South Point roundabout is expected to undergo modifications in coming months in order to accommodate larger trucks from The Point industrial park.

While Lawrence County engineer Patrick Leighty had argued for such a setup when it was originally designed, ODOT went the current design.
ODOT has assured local officials that they will not be doing a repeat closure of the interchange for the modifications.

As for Ironton, Gaskin advised those expressing worries about backups and safety issues with a new traffic pattern from the proposed roundabouts to not panic.