County digs out from winter storm, prepares for another 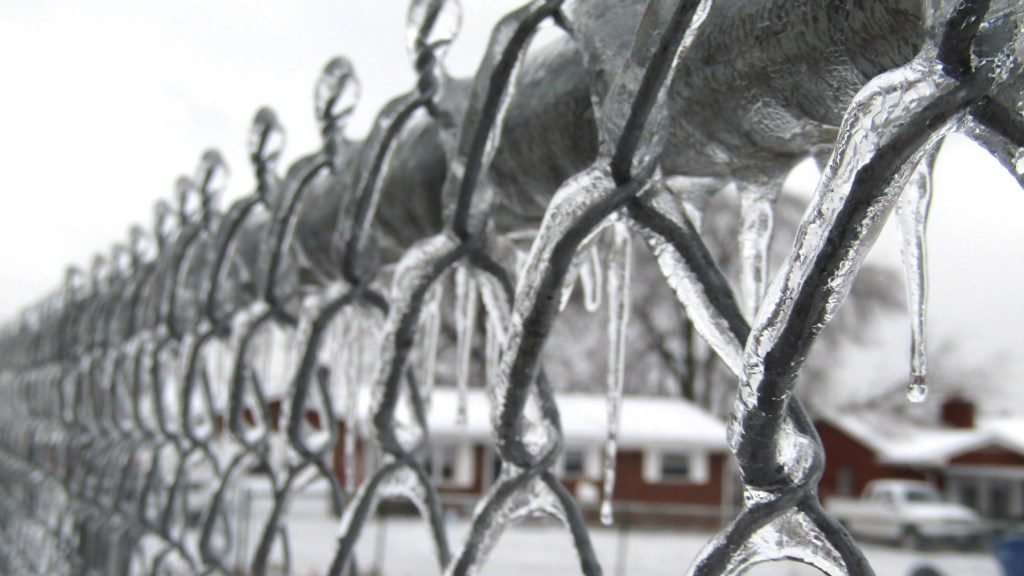 A layer of ice coats a chainlink fence in a South Point neighborhood on Tuesday morning, following an ice storm that his the region overnight. (The Ironton Tribune | Austin Johnson)

Crews were still working on Wednesday to clean up after Monday’s winter storm, while residents prepared for another round of precipitation on Wednesday night.

“Things are pretty quiet for now,” Sgt. Kevin Kobi, of the Ohio State Highway Patrol’s post in the county said.

He said there had been no calls for crashes reported.

“Everyone’s been following the advice and staying home,” he said, noting the biggest issue was lines of traffic backing up from gas stations and other places selling propane and needed items.

Kobi said all state routes were open in the county, but he said some roads had patches that were frozen.

Kobi said on the day of Monday’s ice storm, only one crash was reported, but it was one suspected of involving alcohol.

Brian Pancake, an Aid Township Trustee, said that most in Aid were without power on Wednesday.

He said power had been restored for all in the area from last week’s storm, before going out again.

“There’s just so much damage,” he said. “The county’s got a lot of trees and power lines down.”

He said the roads in Aid were passable, but urged caution as icy conditions remained.

He said there had been issues getting salt and that they were out a truck.

“We’ve been working the road with a back how and grader,” he said. Pancake, who also works for Hecla Water, said there have been issues with people losing service.

“It’s because there’s no power at pumping stations,” he said. “We’ve been working on it.”

Ironton Mayor Sam Cramblit said the city was “doing everything we can” to clear streets.

“And prepare for what may come,” he said.

Cramblit said the city had received a new shipment on Wednesday of 50 tons of road salt to.

“That’s a good thing,” he said. “We’ve had a hard time with the ice, getting it to melt with the temperatures.”

Cramblit described the process feeling like “one step forward, two steps back” with the melting and refreezing, as well as the ice being compacted from traffic and made more slick.

As for outages, Cramblit said it had been spotty around the city and the Indian Hills neighborhood had been particularly hard hit.

“I feel for everybody out there without power,” he said. “It’s hard times.”

Cramblit urged everyone to stay home, if possible.

“The roads are terrible to manage,” he said.

In villages along the river, some were reporting things were in better shape.

In Proctorville, Mayor Rick Dunfee said that there were no outages or water issues within village limits.

He said there were issues in the area, outside of village limits on many roads.

“I heard County Road 77 looks like a war zone,” he said. “There are so many trees down.”

In South Point, Mayor Jeff Gaskin said most in the village had electric and roads were in fairly good shape.

Gaskin said the biggest issue was for water and sewage systems outside the village that belong to South Point.

“We’ve had to come up with creative ways to keep them running,” he said, noting that they have used newly-purchased generators, as well as borrowed one for this task.

He said roads within village limits were in good shape.

“Our crews have been working from 5 a.m. until they get home to make sure it’s safe,” he said and added that the fire department has purchased new chainsaws for work in removing trees.

Coal Grove Mayor Gary Sherman told of a similar situation in his village after power was restored.

He said many trees had fallen, but crews had removed most of them.

As for ice, he said there was only an issue “here and there.”

“The streets are in really good shape,” he said

Coal Grove had also used generators for the lifting stations of their sewage system in order to prevent backups for customers.

He said power had been restored for all but a few streets in the village by 10 p.m. Tuesday.

“AEP — God bless those guys, every one of them,” he said, stating he was surprised how quickly service was restored by crews. “They have worked their tails off.=

He said that he had spoken with street crews, who told him 80 percent of the roads there were clear.

Hart said there were some spots of outages on the main streets, but most issues with power and roadways were in neighborhoods like North Huntington Heights, where he said there were numerous downed trees.

“We’re surviving,” he said. “And if everyone pulls together, we’ll get through this.”