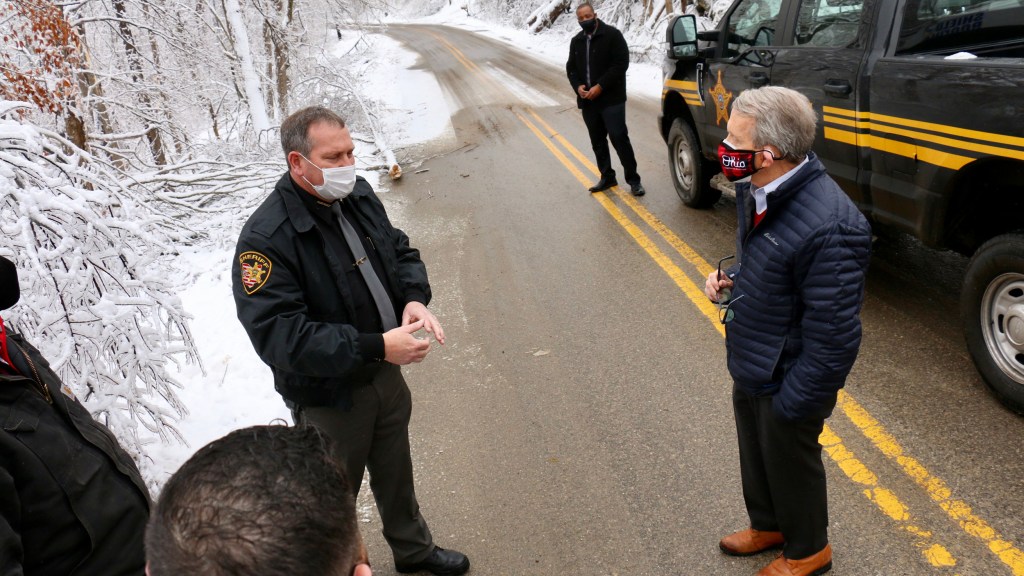 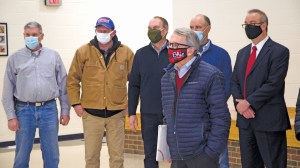 By HEATH HARRISON and AUSTIN JOHNSON

SOUTH POINT — Ohio Gov. Mike DeWine paid a visit to Lawrence County to tour the area and see the effects of three winter storms that hit the area in the past two weeks.

In a press conference with reporters at South Point High School, DeWine, who had issued a state of emergency for Lawrence County on Wednesday, said he was there to meet with county and township officials and see what assistance is needed from the state.

“We depend on those elected officials to understand the needs of an area,” he said.

DeWine said, following the visit, he would work to make sure state agencies are coordinating efforts with locals.

“This is not just me coming here for a trip,” he said. “When I leave, I will be getting on the phone with our team.”

When asked why he felt it was important to visit Lawrence County in person, the governor said, “I want to see it myself, i want to understand.”

“Going places and seeing it and talking directly to the people who are impacted, there’s just no substitute for it,” he said. “You can’t get a briefing from your staff and really understand unless you’ve been there,”

DeWine said his main purpose of visiting Lawrence County was to see what else needed to be done to move forward.

He said local officials have insight into just how hard an area is hit.

“A township trustee may also be out there plowing snow somewhere,” he said. “That’s what people in Lawrence County do. They go out and start working.”
DeWine said the Ohio Department of Natural Resources and Ohio Department of Transportation would be key to clean-up efforts.

“They have to deal with trees a lot,” he said.

He said clean up efforts would be a long process.

“There are as many miles of township roads as there are county roads,” he said. “And it’s a big county — a geographically huge county. It’s not going to be done overnight.”

He said another concern is that streams do not become backed up as the debris is moved and the snow and ice melts.

“It doesn’t take a lot,” he said of flooding.

The governor said he would continue to coordinate with those from the region and would assess the situation.