Guard assisting county in clean up from three winter storms 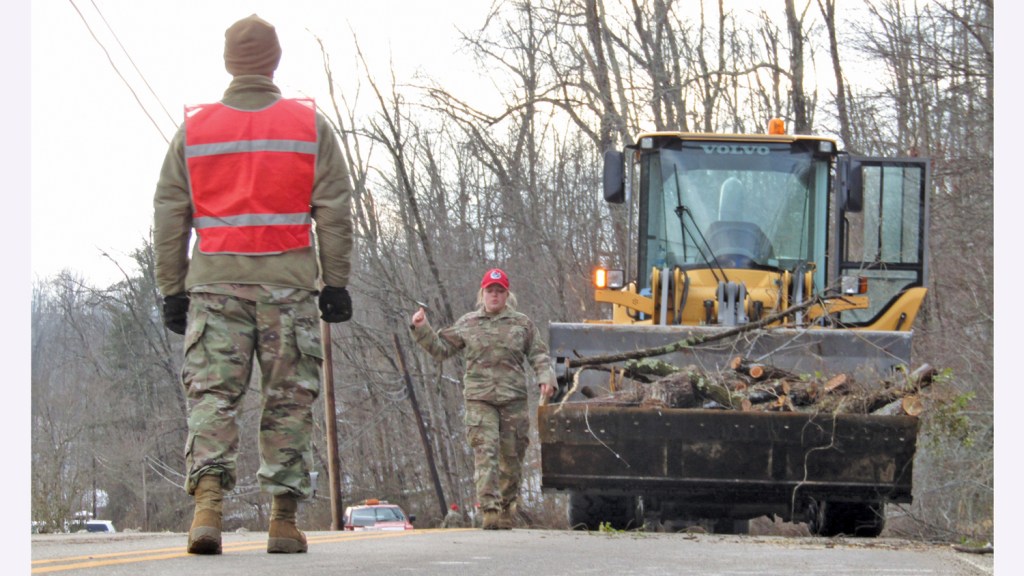 The National Guard works to clean up debris on County Road 18 on Monday. (Austin Johnson | The Ironton Tribune)

Lawrence County and the Tri-State continued on Monday to clean up from the impacts of three winter storms that dumped ice and snow in the region over the past two weeks, leading to downed trees, power outages and blocked roads.

Lawrence County Commission President DeAnna Holliday and County Engineer Patrick Leighty spoke with The Ironton Tribune on Monday, shortly before their daily briefing with utility companies and others on the situation.

Holliday said work has been progressing on power restoration, with AEP estimating the west end of the county had service restored on Sunday, while those in the eastern end would be back on Monday evening.

“We feel pretty confident in that,” she said.

She said there were still 120 AEP customers without power and expected service for them to be restored that evening.

She said crews would remain in the area for coming days, dealing with complications that could arise during the thaw out.

She said there were some concerns of additional trees and branches falling during the melt, but, so far, that has not been an issue. She said the biggest struggle for the last week for those working has been the area’s rough terrain.

“It required special equipment to access areas,” Gilliland said, stating that, in one situation, they even had to use a helicopter to get to a site.

For those in more remote parts of the county, served by Buckeye Rural Electric, Holliday said they have spoken with the co-op and that between 500 and 600 members had service restored on Sunday, followed by an additional 600 on Monday.

Kent Eldridge, vice president of member services for Buckeye Rural, said, as of Monday, outage numbers have been reduced from more than 7,000 total in Lawrence and southern Gallia County to 1,900 in hardest-hit Lawrence County.

“Those 1,900 represent over 100 separate outages,” Eldridge said. “Over 1,500 have been restored since Sunday morning. We now have transmission power to our Sunrise substation, greatly reducing our outages. There should be significant gains in reducing outage numbers this week.”

He said BREC has added 14 additional “mutual aid” crews from other electric cooperatives from around the state bringing that total to 29, as well as several tree crews.

“We’ve also acquired four additional track machines besides the one that BREC owns,” Eldridge said. “These are like mini digger line trucks on bulldozer treads that are critical to take us into extremely difficult locations that are remote, covered with trees and inaccessible by truck.”

He said, as of Monday, BREC had have more than 100 broken poles, not counting the downed lines and broken crossarms.

“One of the biggest obstacles now is uncleared private roads and properties that we need to gain access to for our repairs,” he said. “Information on these locations is being passed along to the county engineer and Lawrence County EMA. Lawrence County has been very organized from the beginning of this storm and invited us to work closely with them to achieve the common goal of restoring power and clearing roads so that the people of Lawrence County can begin to resume a normal life.”

Eldridge said BREC is extremely concerned for their members.

“Our hearts go out to them,” he said. “Our members have been phenomenal in their understanding and patience. Many of our workers also are without electricity working 16-hour shifts, seven days a week. Story after story from our men that came to help us from cooperatives around the state, talking about how well they’ve been treated by the people of southeast Ohio when they are restoring power. We are working as expeditiously and safely as possible.”

The storms also caused a loss of water service for many in the county, due to loss of power at pumping stations.

Holliday said that they have spoken with Hecla Water and all customers should have service back as of Monday. She said those in higher elevations may have less pressure as tanks for the utility refilled.

She said communications companies are still working in parts of the county.

“They’re heavily dependent on the electric companies,” she said, noting that Armstrong Cable had run new lines over U.S. 52 over the weekend.

Gov. Mike DeWine activated the National Guard to assist the county on Friday, when he toured areas in Lawrence County impacted by the storms

Leighty, who is coordinating efforts with the National Guard, said they on Sunday, and are working in two groups, one on County Road 18 and the other on County Road 32.

“The operation has come together pretty fast,” he said, adding that they are working on hardest hit areas first.

“There may some townships that have a few trees down, so we don’t want to use them for things we can take care of ourselves,” Leighty said.

He said it will be a large task, noting that there are still 750 miles of routes in the county, not counting county and township roads.

“We’re strategically placing them in our highest devastated areas,” he said, stating they would be doing a lot of debris removal.

He said National Guard members will remain in the county until the mission is complete and infrastructure and public safety are assured.

Leighty said, as of Monday, they have determined that all residents in the county now have access to the public road system.

“Nobody is blocked from a public route,” he said.

Leighty said the initial fears of flooding in the aftermath of the storm appear to be easing.

He said the National Weather Service has told them that they expect it to be a gradual melt, which would minimize that threat.

“We’re very fortunate there,” he said, though he pointed to the fact that the river is also affected by what happens upstream in areas such as Pittsburgh, so they will continue to monitor that situation.

Holliday urged the public to use caution in coming days as ice and snow melts, and to watch for ice that could be falling from trees and buildings.

The Oakley C. Collins Memorial Bridge between Ironton and Russell was temporarily closed on Sunday evening into Monday afternoon, due to ice falling from the structure.

“We’ve even had reports of people standing in doorways and almost being hit, so everyone should be extremely cautious, regardless of where they are at,” she said.