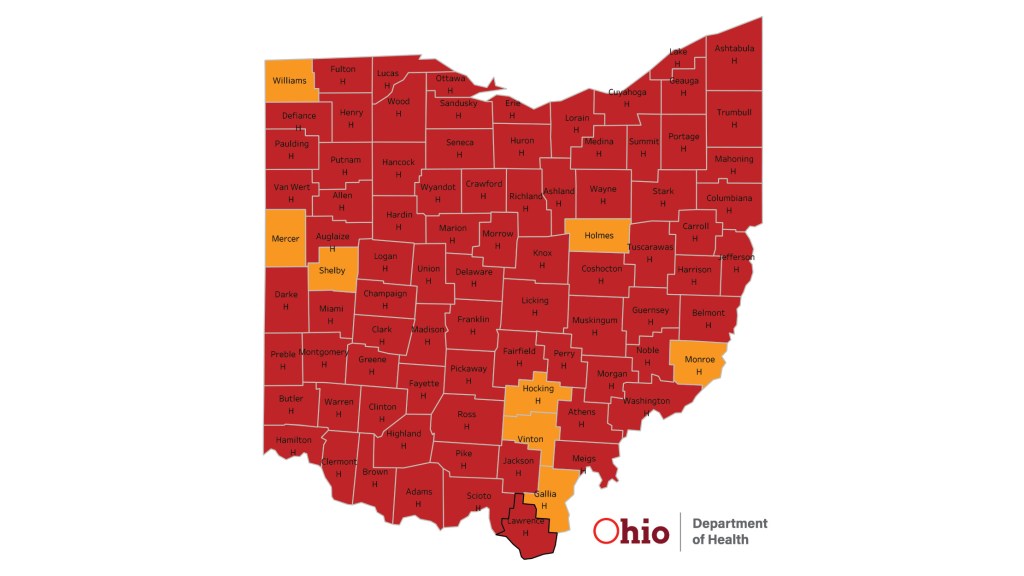 COLUMBUS — Ohio’s COVID-19 map saw some improvements after several weeks with no change.

At his news conference on Thursday, Gov. Mike DeWine announced that four counties had moved from Red Level Three to Orange Level Two, bringing the total number of counties at Level Two to eight.

“This shows that case rates for these counties are starting to drop—which is good news,” DeWine said.

The rest of the state’s counties were listed at Red level Three, including Lawrence County, which has been listed at that designation since Oct. 8. The 20 weeks at Level Three is Lawrence County’s second stint at that level.

Another improvement is that five counties, Williams, Mercer, Shelby, Holmes and Vinton, no longer have an “H” for high incidence of the virus. Previously, all counties in the state had this ranking.

“Today, we are announcing the next steps to ease some of our public health measures while mitigating the spread of COVID,” DeWine said. “The coming months will be critical as new variants of the virus spread throughout the nation and Ohio, but we are optimistic. The goal will be for all of us to get back to where we want to be — what our lives were before the pandemic. There is a bridge back to that life, and that bridge is built on vaccinations and continuing safety protocols.”

“There will be certain safety measures in place to protect patients and staff, such as mask requirements, hand hygiene protocols, and time limits,” he said. “Proms, banquet centers, wedding receptions, fairs, festivals, and parades: Guidance will be ready soon.”

“This is a start,” he said. “If the situation improves in spring/summer, this could be expanded.”

Some required precautions will include mandatory mask wearing for employees/customers, spectator pathways that allow for social distancing, seating in pods of no more than six people, recommended to be of the same household. Seating pods must be separated by at least six feet.

General admission (lawns, standing room, infields) will be allowed as long as masks are worn, and six-foot distancing can be marked/maintained, he said.

“So we will be adding more vaccine provider sites — including some Meijer and Walmart sites and more independent pharmacies,” he said. “RiteAid, Kroger, CVS, Walgreens, local health departments, hospitals will also have more doses. We believe, based on information from the federal government, that once the Johnson & Johnson vaccine is available, Ohio will have another 91,000 doses during the first week.”