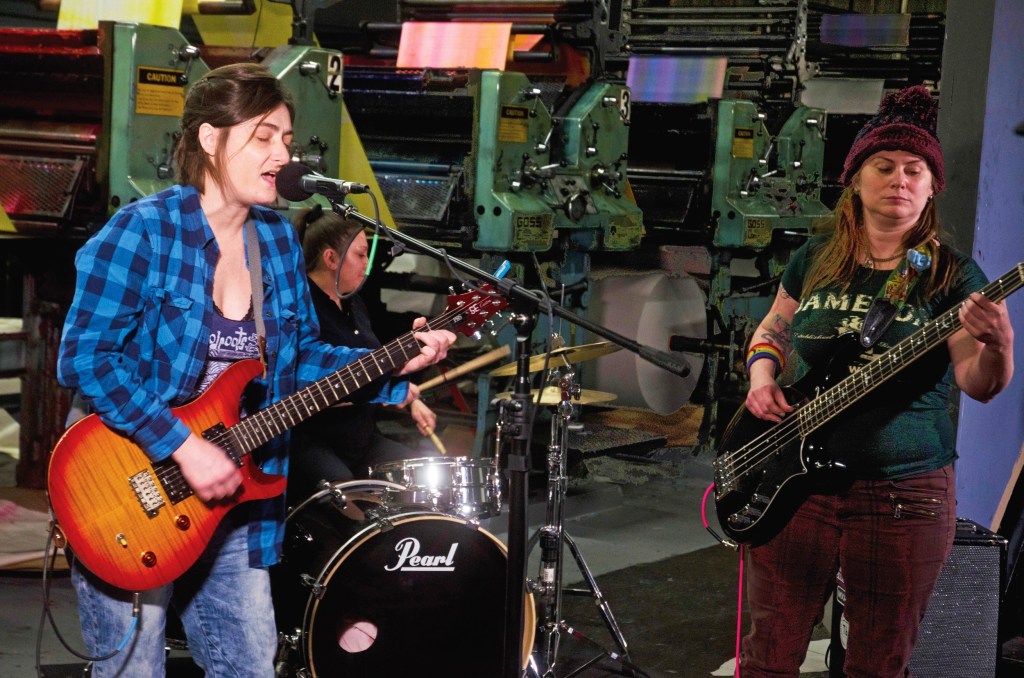 CHARLESTON, W.Va. — Andrea Anderson has been playing music for a long time and, last month, she released the debut CD of her new band, Unmanned.

The self-titled album features Anderson on guitar and vocals, Katie Barker on bass and vocals and Misty Lomas on drums.

Anderson, who graduated from Huntington High School and attended and taught at Marshall University, moved to Charleston in 2008, where she was the sound engineer at The Empty Glass on Elizabeth Street and became involved in the city’s music scene, performing both solo and with bands.

She describes Unmanned as a three-girl, “garage rock and pop-punk “ band and said the group has been performing livestreamed events since the COVID-19 pandemic hit last March.

Last week, they recorded an episode of The Ironton Tribune’s Press Room Recordings, which will air in the near future and be featured online.

Anderson said the band is also planning a socially-distanced live show, now that they are allowed in West Virginia.

Unmanned’s album was produced by Eddie Ashworth, an Ohio University professor of media arts in Athens.

“He’s produced a lot of records, for Qiet, The Settlement and others,” Anderson said.

This album marks a change of instrument for Anderson.

“I played banjo primarily, but I eventually picked up a guitar and that became my main instrument,” she said, noting all of the album’s songs, except for one, are guitar-based, with the last featuring banjo.

Anderson, who attended Marshall for sculpture, said she also still works in the visual arts.

Since the pandemic began, she has been doing a lot of landscape paintings, from both photographs and on location.

She said she has also done commissioned portraits, with a focus on pets.

Physical copies are also available by contacting the band through their Facebook page at https://www.facebook.com/UnmannedRockBand and on Instagram.