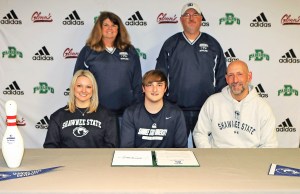 PROCTORVILLE — Trenton Fuller signed a scholarship on Tuesday to continue his bowling career with Shawnee State University.
Fuller is a bowler for the Fairland Dragons who recently finished 33rd in the 200-bowler state tournament.
The senior qualified for state with a 584 series and bowled a 586 series at the tournament with rolls of 189, 199, and 198.
“I’ve always wanted to continue bowling past high school, so to see it finally come true is a dream come true for me,” said Fuller.
He started bowling at Strike Zone in their youth league nine years ago and soon found out that he was pretty good at it with his 182 average currently as a senior.
But, it was in that youth league where he caught the eye of Shawnee State’s bowling coach Bryan Sturgell.
Sturgell offered Fuller the scholarship two weeks ago, and Fuller said he never considered another school.
Fuller also has one perfect game to his name with a bowling score of 300. This admirable accomplishment came in March of 2020 at the Pepsi Open in Parkersburg, WVa.
He carries a 4.6 grade point average and plans to major in Engineering.
In the beginning, Fuller believed there was “not a chance” he would land a scholarship for bowling when he started nine years ago.