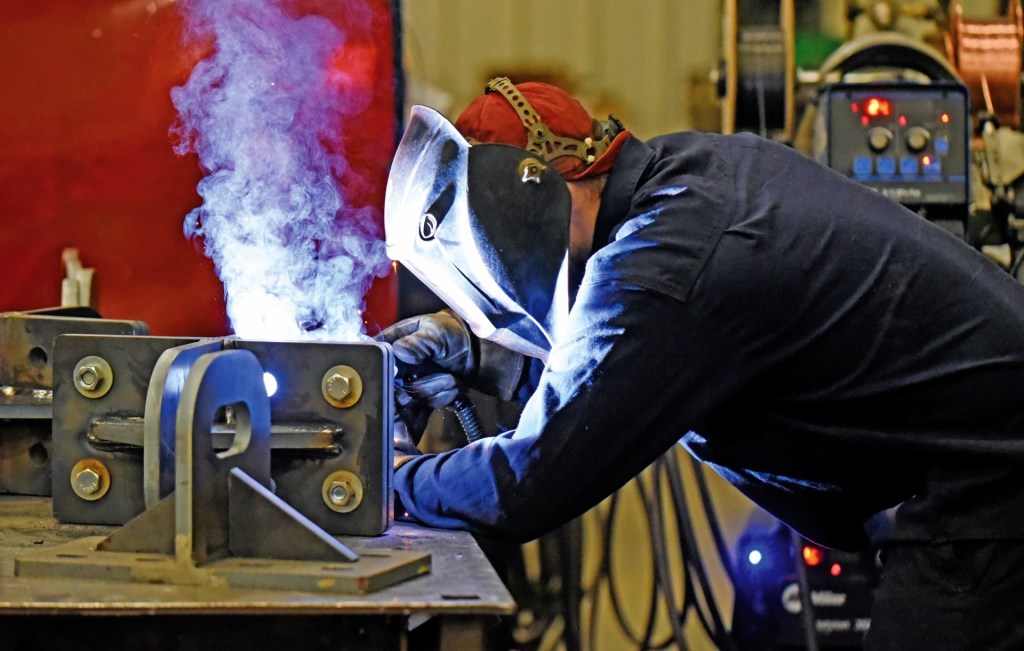 In the two decades since its founding, The Point Industrial Park has brought numerous companies to Lawrence County, creating hundreds of manufacturing jobs.

The South Point site was purchased from Ashland Oil in 2001. About three years later, Bill Dingus, executive director of the Lawrence County Economic Development Corporation, came on board to oversee its development. He had previously served as the first dean and executive director of Ohio University Southern in Ironton.

“It had been purchased, but nothing had been done,” he said, stating that the first priority was creating roads and establishing water and sewage systems for the site.

Currently, the site serves as a home for 18 different businesses and employs between 700-800 workers who are creating a variety of products made in Lawrence County.

“We have Harbison Walker International,” Dingus said of the Pittsburgh-based company, who opened a refractories plant at The Point in 2018. “They’re extremely good. They make materials used for insulation with steel mills and aluminum mills.”

The ceramic materials produced by HWI are designed to withstand extreme heat and cold conditions found in modern manufacturing processes.

“Then there is Intermountain Electronics,” Dingus said of another company at the site. “They make power supplies for industry.”

Dingus said the switchgears created by the company are built into a container, which can be pulled up to the side of a building.

“Then, they can plug everything in,” he said.

Dingus said the company creates products for a number of the world’s bigger tech giants.

“They’re doing some huge containers,” he said, pointing out a 175-foot long container that recently was transported through Ironton.

Dingus said this is similar to the air conditioning units created by Vertiv, another company lured to Lawrence County by LEDC, with operations in Ironton.

Other manufacturers in The Point include Engines, Inc., which builds parts for the rail and mining industries, XCAL, which creates the cutting edge for snow blades used by the Ohio Department of Transportation and others, and Pyro-Chem, which produces roof bolts for the mining industry.

Dingus explained the process of roofing for a mine.

“You drill a two to two-and-a-half inch hole into the roof of mine after you take coal out, four feet deep, and then you slide in a tube of mastic, with different chemicals with plastic liners in between,” he said.  “Then, you take a four to four-and-a-half foot of rebar, flattened on end. They put a plate on the end and slide it up. It’s shoved up through mastic and, as soon as it breaks the layers of plastic, it hardens and swells. It holds and the roof is self-supporting.”

All the parts in the process have a Lawrence County origin, he said.

“Pyro-Chem makes the mastic, XCAL makes the plate and Minova makes the rebar stem,” Dingus said. “The entire roofing system of the mining industry is built at The Point.”

Dingus said the COVID-19 pandemic has not slowed development and operations.

“We’ve stayed with our manufacturers and helped any way can,” he said. “We get them information to make sure they properly interpret state guidelines to protect their workers and get them the PPP they need. They do feel they’ve got a family they can depend on here.”

While he said the pandemic slowed things across the country, he said there has been no real negative impact on The Point. He said they have still been making contacts with potential companies through virtual means.

When asked what makes The Point an attractive location for businesses, Dingus said a major factor is its location, only minutes from Interstate 64 and with access to rail and the Ohio River.

“Second, the park is above the 500-year flood plain,” he said. “Major industries are cautious of that.”

For future development, Dingus said they working on marketing another 30,000-square-foot building, upgrading rail and developing more land on the site.

And he said they are looking forward to upgrades on the South Point roundabout, which will allow larger trucks entry into The Point from U.S. 52, rather than taking a longer back way in.

Dingus said a major factor in the future of manufacturing at The Point will depend on U.S. polices regarding China and they hope to benefit from manufacturers abroad seeking to create products in the U.S.

“Prior to the pandemic, a lot of Chinese products had moved in this direction,” he said. “I feel we will continue to this movement here of Chinese manufacturing. It’s so expensive to ship from China to the U.S.”

He said a lot of the shipping cost with Chinese manufacturing is two ways.

“They’re shipping raw material from the U.S. over there, like wood — they don’t have any wood — to china, manufacturing a product, then shipping the finished product back,” Dingus said.

He said he hopes to keep The Point on top of an advancing industry.

“With automation, labor is only a small percentage of any product,” Dingus said. “Productivity is the answer. And so many products are not manufactured, they re printed. With airplanes — if they break a handle, simply get on computer, order a new one, it’s printed and shipped to them.”

Dingus said these advances, along with those in the field of genetics, were unfathomable a few years ago.

“That’s why I believe the key to Lawrence County’s future is the 26 acres we have reserved for a research park at The Point,” he said. “It’s a changing world and it’s going to be interesting.”