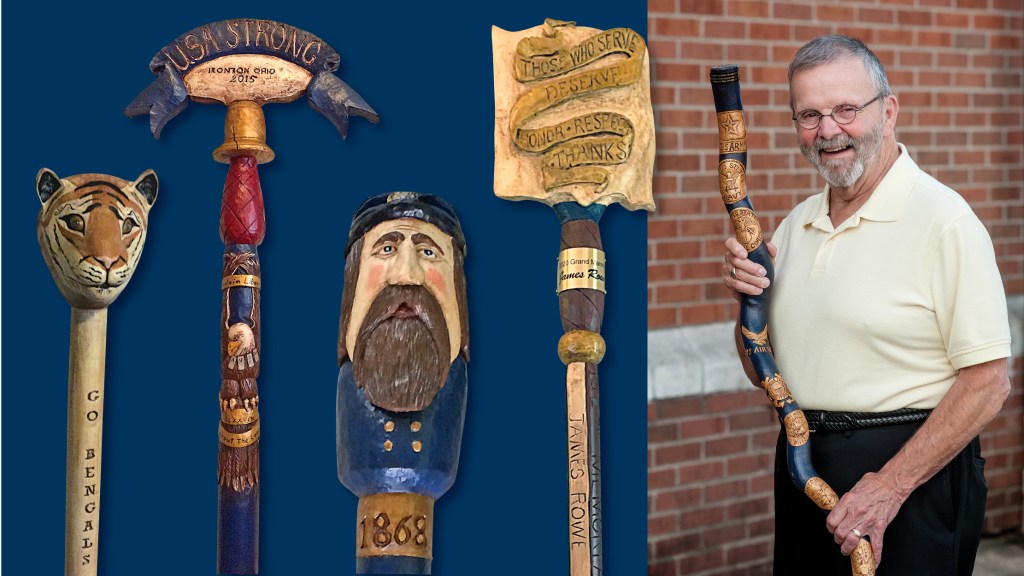 CHESAPEAKE — Each year, as the Ironton-Lawrence County Memorial Day Parade steps off in May, its grand marshal carries a special item.

Since 2009, Charlie Cooke, of Chesapeake, has been hand carving intricate, decorative canes for the parade each year.

Cooke, who retired in 2007 from the wholesale pharmaceutical business, says he has been carving wood for more than three decades.

“I did little figurines for years — Santas, angels,” he said.

He and his wife, Donita, ran a shop in Ironton for several years, My Heart Is In The Country, and it was the Santa figures he displayed there that led to his involvement in the parade.

Cooke met one of the organizers of the annual Ironton-Lawrence County Memorial Day Parade, Lou Pyles, who is a huge fan of carved Santa Claus figures.

“I’ve collected his work for 25 years,” Pyles said. “Charlie and his wife owned the store and used to put Santas in the window. I asked if he could carve me one every year.”

Cooke said Pyles asked him if he would be interested in taking over the carving of the canes, after Bill Ellis, who had done so previously, passed away.

“I said yes, and I’m so glad I did,” Cooke said. “So, every year, I give one out at the past grand marshals dinner and it’s come to be a tradition for me.”

Cooke said he works primarily with a balsa wood stick, but he has also used woods such as willow.

He said he prefers the balsa because it is “Something lean and easy to carve.”

He said he is usually contacted in late January by Pyles, who tells him the theme of the year’s parade, then he gets to work.

He said he uses a lot of hand gouges for the carving, but, due to arthritis, he has recently used a power carver to rough in the shape first.

“It reduces the knife and gouge work,” he said.

After the carving is done, his wife paints the items.

Cooke said he carves off and on through the following four months and has the finished piece ready by mid-May.

While he has never counted his total carving time, Cooke said he estimates if he were to work continuously, a typical cane would take him about two weeks to finish.

Cooke’s work has been seen at the Bob Evans Farm Festival and at craft shows around the region. He said he also carved a tiger head cane for the openers of the Cincinnati Bengals.

As for other projects, he said he is making canes for his family.

He is continuing to make Santa figurines for Christmas and is working on a freestyle owl piece at the moment.

“I stay fairly busy,” he said.

She said her request to Cooke is for a red, white and blue theme, with stars and stripes.

“He’s one of the greatest people you could ever hope to meet and know,” Pyles said. “He’s a wonderful friend. His work is just exquisite. He has god-given talent and we’re so blessed to have him on the parade committee.”