Hundreds turn out for benefit dinner to aid Sanborn family 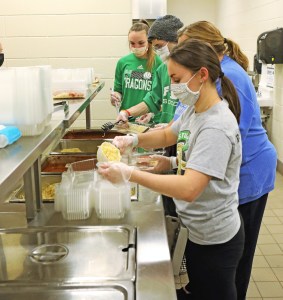 Tim Gearhart
For The Ironton Tribune

A steady stream of cars passed through the Fairland High School parking lot Thursday evening (3-4-21) to pay tribute to sports photographer Kent Sanborn.
Hundreds turned out at Fairland for a special spaghetti dinner fund raiser over a 4-hour time frame.
The event was organized by the Fairland High School student council after it became know that Kent, who has spent the past 40 years photographing every type of sporting event played in Lawrence County and beyond, was ill.
When the event was planned, no one dreamed it would be held on the day Kent left this world.
He became ill in late February and the diagnosis was cancer. After a bit over a week at Ohio State University Hospital in Columbus, Kent returned home and entered hospice care on Monday at Community Hospice in Ashland. He died there early Thursday morning.
Everything needed to have the spaghetti fund raiser was donated and a small army of students, parents, staff and the athletes Kent devoted thousands of hours to, prepared the food and delivered it to cars as they came through the parking lot.
Money raised will go to Kent’s family to defray medical bills and other expenses.
Like the thousands of athletes who have paid tribute to Kent on Facebook and other social media over the past several days I too will miss his calm, soft spoken demeanor. Kent went about his craft in a very low key manner, quietly finding the best spot to photograph the athletes he treasured and who returned that love this past week.
For at least 15 years, when I started doing a few football pictures for friends who had children or grandchildren playing, Kent and I communicated daily.
Lawrence County, southern Ohio and the Tri-State has lost a legend and there won’t likely be anyone else ever to match the volume of photography work he has left behind.
Safe journey my friend.