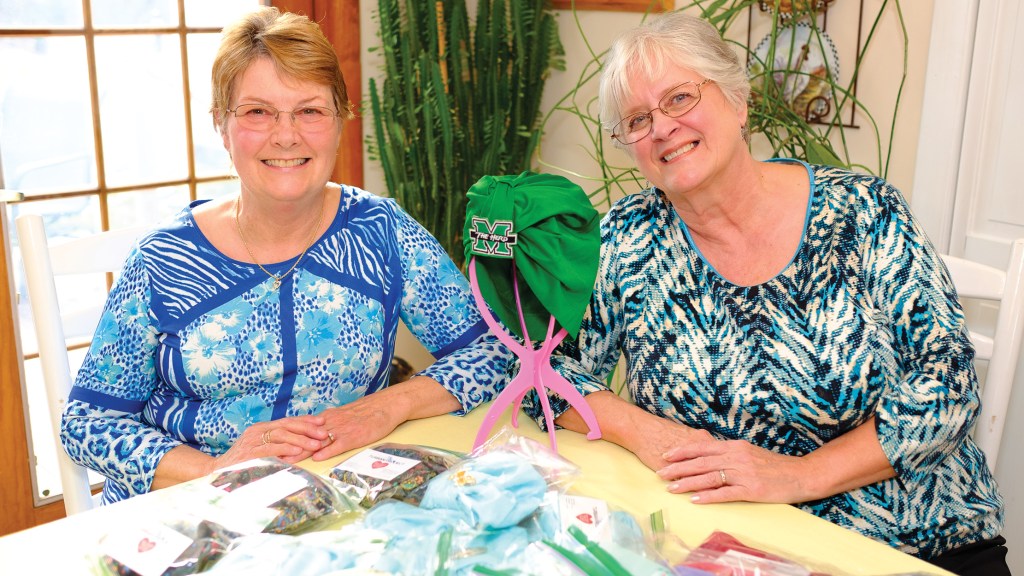 Those battling cancer have been given a special gift, created by a group of volunteers from Lawrence County.

For the past six years, a team of volunteers based in Proctorville have been creating Courage Caps, made from material donated from throughout the region.

The effort is spearheaded by Delma McComas of the Ensee Homemakers, one of three groups that comprise the Lawrence County Homemakers. For her, the mission is a personal one.

Her daughter, Kristin McComas-Parsons, who was a speech language pathologist at Marshall University, passed away from leukemia.

McComas said her daughter was known to her co-workers for being brilliant and humble and willing and able to do anything and everything for others.

“When we lost her, I was devastated,” McComas said.

And it was five years after her daughter’s death that the project began.

McComas said she had heard of the idea of The Turban Project through Facebook.

The group, based out of Zanesville, Ohio, creates headwear for those who have lost their hair due to cancer and other illnesses.

“I saw that and I said, ‘I have to get involved,’” she said, remembering how hard it was for her daughter when she had to shave her hair.

McComas was able to establish a satellite of the project locally and, with members of the Ensee Homemakers, friends from church and members of other Lawrence County Homemakers groups, formed a team to sew, cut and decorate the headwear.

She said a yard of fabric can be used to sew four caps for adults.

“Or five or six for children,” McComas said.

Once finished, they are then decorated with “bling,” she said.

The group has also produced fleece winter beanies for patients and, though the COVID-19 pandemic has slowed homemakers’ events, they have also been sewing masks for doctors’ offices, businesses and hospitals throughout the country. Altogether, they have produced 3,500 masks.

For the Turban Project, McComas said they have received grants, as well as monetary donations and material from the community.

One person she heard from was Kathy Chezik, the former chair of Marshall University’s Department of Communication Disorders, for whom Kristen worked as a graduate assistant.

Chezik remembered McComas’ daughter as one of the brightest students she ever encountered and she made a $5,000 contribution to the project.

A scholarship in Kristin’s name has also been set up at the university.

To date, McComas and her team have created more 9,000 caps, which have been delivered through area hospitals.

Before they are delivered, they are prayed over by children at Mount Hope Missionary Church, where the pastor Mark Roach, who is heavily involved in the project, puts them on the altar.

McComas said this has continued during the pandemic, with Roach praying over the phone when doing so in-person is not possible.

McComas said she has heard from many cancer patients who have received the caps and she hopes the efforts gives them hope and allows them to see the goodwill from the community.