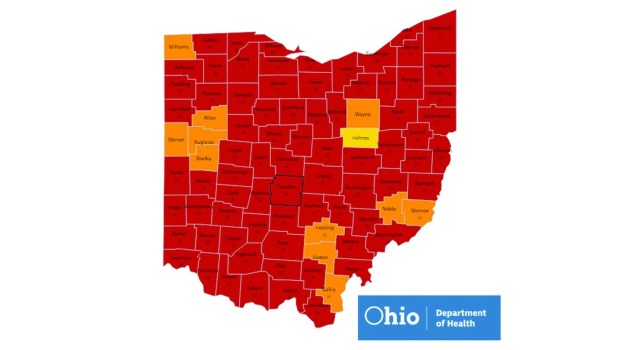 Lays out methodology for lifting health orders in statewide address

This week, 11 counties were listed at Orange Level Two, an increase of three since last week, with the change being due to four counties having their designation dropped from Red level Three.

One County, Holmes, also moved to Yellow Level One, the least severe designation on the four-tier system.

The rest of the state, including Lawrence County, continues to be listed at Red level Three. No counties are listed at Purple Level Four, the most severe designation.

Lawrence County has been at Level Three since Oct. 8. The 20 weeks are its second stint at that designation.

DeWine also gave a statewide address on Thursday evening, marking one year since the state reported its first case of COVID-19.

“Ohioans are doing things right,” he said. “And because of what Ohioans have done, we have made significant strides in getting our lives back to normal.”

DeWine pointed to the lifting of the statewide curfew, stay-at-home orders and the reopening of restaurants, bars and gyms as indicators that the situation has improved as vaccinations are under way.

“The end of our fight is now in view, but we must continue pressing forward in these final days,” DeWine said. “We must not relent.”

DeWine said more than 1.8 million Ohioans have been vaccinated at more than 1,200 locations.

“The vaccine is the most efficient, effective and powerful weapon,” he said. “Our vaccination plan has been to prioritize Ohioans most likely to die if they get the virus: older Ohioans, those with severe developmental disabilities and those with serious, life-threatening medical condition.”

He said the National Guard has been vaccinating people at low-income senior housing locations, churches, community health centers, and many other places in the state.

“Our path back is by each of us getting vaccinated when we can, and by each of us wearing masks in public,” he said. “While no one will be forced to take the vaccine, the more of us who are vaccinated, the more complete our victory and the more confidently we can put this behind us.”

He urged the public to continue to follow the guidelines and be vigilant in coming months.

“This has been a tough year,” he said. “Many have lost a parent, a grandparent, a sibling, a spouse, and some have even lost a child. Yet we did what Ohioans always do — we rallied together. We sacrificed. We worked hard to protect the most vulnerable.”

COLUMBUS (AP) — Ohio schools still would have to administer nearly all the usual tests this spring but would have... read more