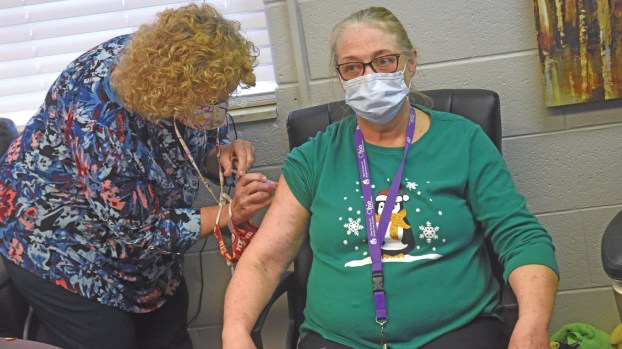 At their Tuesday meeting, Lawrence County Health Department director Georgia Dillon said she came to the commissioners with positive news.

She said the health department did five COVID-19 vaccination clinics last week, including all school personnel who wanted the shot.

“We did 2,600 doses,” she said, adding the total number of 7,870 vaccinations given to Lawrence County citizens. “We were able to do the schools very quickly and efficiently.

The superintendents said it was a very organized clinic.”

The clinics were held in the gymnasium in the South Point Board of Education building and Dillon said it was nice to be in a place where they didn’t have to take down all their equipment every night.

She also reminded people to get their second doses of the Pfizer and Moderna vaccines.

Dillon said that in the upcoming week, they will do first shot clinics for a child care center staff, local Child and Family Services employees, embalmers, morticians, fire fighters and law enforcement officers and people in the age of 60 and above age category.

She said they will soon be having mass vaccination clinics for everyone, as the lists made by the state of who should get the vaccine first are finished.

Dillon said she is working to get a complete number of Lawrence County citizens who have been vaccinated since other local agencies have done vaccinations and some people have got their vaccination shots at Kentucky or West Virginia hospitals or at health departments.

The 7,870 shots that Dillon referenced were only the ones done by the Lawrence County Health Department.

She gave a rough estimate from the numbers she had as over 9,000 shots given to Lawrence County residents.

Commissioner Freddie Hayes Jr. commended Dillon and the staff for getting so many vaccinations done.

“I think we’ve turned a corner. I am hoping we can get things back to normal as fast as possible,” he said.

After Dillon’s report, commissioner DeAnna Holliday gave an update of the post-snow and ice storm situation. She said the county had gotten over 100 calls for help for storm damage.

She pointed out that the Ohio National Guard had been mobilized to help with the cleanup.

“They have proven to be a huge blessing to us as they continue to work through county and township roads, cleaning debris, trees and that kind of thing from our roadways and public lands,” she said. “We have also been blessed with volunteer organizations that moved into Lawrence County late last week.”

She said they don’t know how long the Guard will be here, but “we certainly are grateful to have them as long as we can keep them.”

Hayes also commended Holliday for heading up the clean-up efforts and working on it 24/7.

For people to report damage, the commissioners have set up a Google doc https://forms.gle/Da4ez8MXGrmZu9AA8.