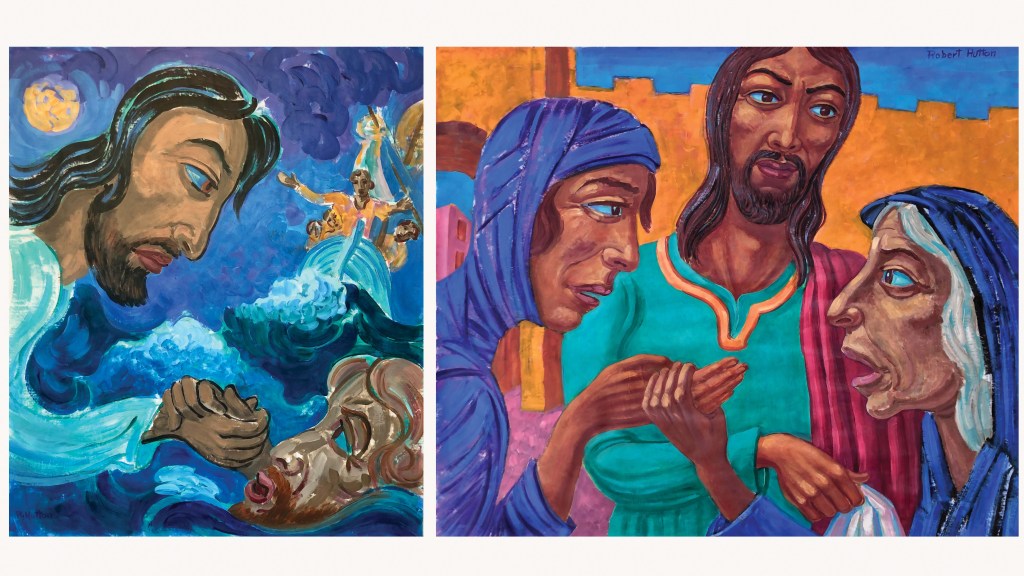 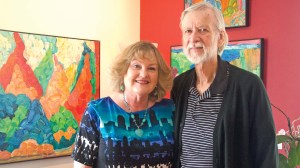 SOUTH POINT — The COVID-19 pandemic may have derailed public events for the Hutton Wayfarer Gallery in South Point, but its co-owner has spent the past year of social distancing focusing on his work, creating a new painting series centered around the Gospel of Jesus Christ.

Robert Hutton, who owns and operates the gallery with his wife, Robin, said the series is done using Open Acrylics, in which the paint does not dry as fast as typical acrylics, allowing him to work on them with more time. 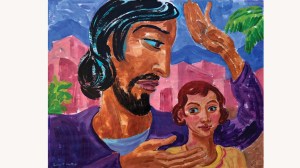 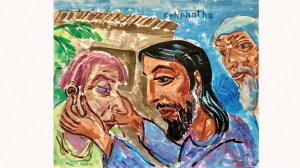 A former fine arts professor who taught at Marshall University for three decades, Hutton also served five years as a lay brother with the Catholic missionary order, Society of the Divine Word in New York and Illinois.

He said the series is based on the first three Gospels and depicts incidents in Christ’s life, with some paintings being more refined, while others are on the sketchier side.

He said he recently completed two of these pieces and has been working on the series since the summer. 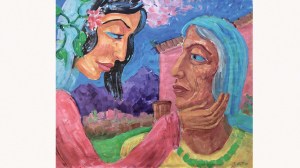 Hutton offered his thoughts on the work:

“Someone once asked Henri Matisse why he did not paint religious art. He replied that he “didn’t feel such subjects.” For the artist, a most important prerequisite is to find and feel strongly about their subject. Without that compelling factor, the work tends to fall flat.

Reading and reflecting on the New Testament Gospels has been a major inspiration for this series of paintings. I imagined myself as a participant in the various narratives — Examples: as the incredulous deaf man when healed (“Ephaphatha: Be Open”) or as panicky Peter sinking in the stormy sea, even with its touch of humor (“Lord! Save Me!”).

Thus, I felt such subjects.

I decided to simplify and strengthen the visual impact in all of the paintings by getting close up, featuring only the dominant figures of each narrative, while cropping out most of the background. This allowed me to emphasize the emotional response of each person. Examples: Christ’s compassion towards the sick and oppressed; the awe and exhilaration of the widow whose son was raised back to life (“Life Restored to the Widow’s Son”).

Color is used intuitively to enhance the visual and emotional impact. Just as music enhances the lyrics of a song, color provides the power to heighten feeling, mood and expression to the images.

The earlier paintings in this series were more spontaneous and fluid, whereas the later pieces were more carefully refined and detailed.

When I recently worked on “Whoever is Without Sin…” I envisioned the adulterous woman as a battered woman, a symbol of all abused women.” 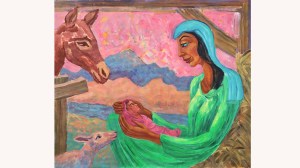 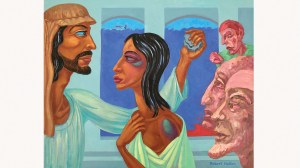 “Whoever is Without Sin,” acrylic, by Robert Hutton

Robin said that, although the “Acrylic Painted Gospel” series is new for 2020, Christian imagery in Robert’s art consistently reappears. When he was in high school, one of his first spiritual creations was a clay sculpture of the head of Christ covered with a crown of thorns.

She said, because of his personal faith, his interest in Christian themes has continued throughout his art career, to when he was an Marshall University art professor, where he was awarded two Benedum Foundation grants: “Painted Parables”, contemporary interpretations of Gospel stories like “Lazarus & the Rich Man”, “Prodigal Son”, “The Good Samaritan,” and “Painted Portrayals” depicting important events in Christ’s life “Mary with the Infant Jesus”, “Ultimate Love” – Jesus on the Cross.

Robin said art sales were at a standstill until she began making art prints, greeting cards and note cards of the new “Acrylic Painted Gospel” series and then posting their availability to purchase on their Facebook pages.

“Many have felt stressed and depressed during the pandemic, therefore they relate to Robert’s “Lord! Save Me!” image,” she said. “As the HWG Gallery Director, also feeling like Peter sinking up to my neck while our business was closed for months, I was finally encouraged by the enthusiastic responses from those who began ordering the affordable cards and prints online in December.”

She said one client even expressed, “I love all of these! I want all of the small cards because I love them all and want to have them in my possession!” and also ordered two matted prints ready to place in 11” x 14” frames as gifts.

For those wanting to order art, they may contact through Robert Hutton (South Point) Facebook page or leave a voice message at 740-894-5658. Contactless arrangements may be made for local pick up.