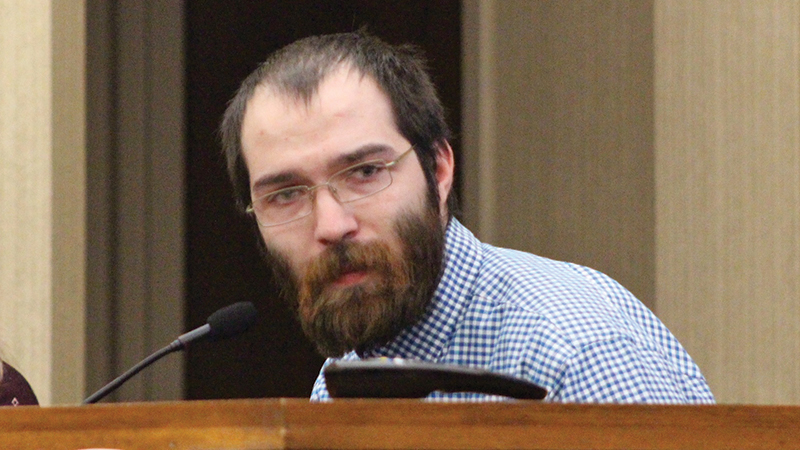 Arron Lawson takes the stand Tuesday to ask the judges to spare him of the death penalty. (Photo courtesy of Courtney Hessler/The Herald-Dispatch)

On Tuesday, the Ohio Supreme Court heard an appeal for Arron Lawson, who was convicted and sentenced to death for the 2017 quadruple homicides of Stacey Holston, 25; her son, Devin Holston, 8; her mother, Tammie McGuire, 43; and Tammie’s husband, Donald McGuire, 50, on Oct. 11, 2017, at 15497 State Route 93.
His lawyer, Thomas Rein, who is based in Cleveland, is asking Lawson’s conviction and death sentences be overturned and that he get a new trial.
The state was represented by Lawrence County Prosecutor Brigham Anderson, who originally prosecuted the case in 2019.
He said that all death penalty cases are automatically appealed to the Ohio Supreme Court, bypassing the appeals courts.
“The issue that he has filed on is that the court should have evaluated (Lawson’s) competency prior to waiving a trial jury and submit the case to a three-judge panel,” Anderson said. “But there is nothing in the law that supports that.”
Lawson, against the advice of his lawyers, waived his right to a jury trial and wanted to plead guilty, but had a trial by a panel of three judges instead.
Rein said that as a capital case, procedures and protocols had to be scrupulously followed to ensure Lawson got a fair trial.
“However, that did not occur in this case,” Rein said, who did not represent Lawson during his 2019 trial.
He pointed out that Lawson was never tested to see if he was competent to stand trial and assist his lawyers in his own defense.
Rein said that the court essentially ignored Lawson’s competency by not having the test done.
Justice Fischer asked if that the trial lawyer said that competency wasn’t an issue.
Rein said the lawyer said he wasn’t qualified to make a decision on competency and the court ignored the competency issue.
Chief Justice O’Conner asked a question about whether the trial lawyer said he had represented other clients who were incompetent and didn’t measure up to other clients who were incompetent.
She then said Lawson had been plagued with psychological issues his majority of his life. She asked if he was on medication when he decided to plead guilty. Rein said that he was on four medications and that it may have interfered with his thinking clearly.
Brigham said that a competency hearing was never requested.
“No one ever raised the issue of competency. There was never any reason,” he said. “The defense never raised the issue, number one. And number two, there wasn’t any indication that the defendant wasn’t competent. He was involved in many, many hearings and never did he seem to be not understanding what was going on.”
Anderson said his main point was that Lawson, from the very beginning of his capture through the last day of his trial, he “always appeared to be articulate, intelligent, know the ramifications of his decisions and he made a strategic decision to waive the jury.”
Anderson said they went through three weeks of jury selection and questioned each potential juror on their thoughts and feelings on the death penalty.
“He knew who the jurors were, they were already picked and he made the strategic decision to go with the three-judge panel, which who can only have in death penalty cases,” Anderson said.
The Ohio Supreme is considering the case and will issue its decision at a later time, although not any time soon.
“The Ohio Supreme Court issues a written decision, typically within 6–12 months,” Anderson said. “It can be sooner than that, but it could be that long.”
On Feb. 28, 2019, Lawson was given the death sentence on all four aggravated murder charges in the courtroom of Lawrence County Common Pleas Judge Andy Ballard in a unanimous decision, following a nearly four-hour deliberation.
Ballard, who sat alongside retired Cuyahoga County Common Pleas Judge Janet Burnside and retired Brown County General/Domestic Relations Judge R. Alan Corbin on the panel, stated that the aggravating circumstances outweighed the mitigating factors in the case, which resulted in the death penalty.
Lawson was also sentenced to a total of 59 years and six months in prison on other charges, which included attempted murder, a first-degree felony, aggravated burglary, a first-degree felony, kidnapping, a first-degree felony, tampering with evidence, a third-degree felony, theft of a motor vehicle, a fourth-degree felony, and failure to comply with the order or signal of a police officer, a felony of the third-degree.