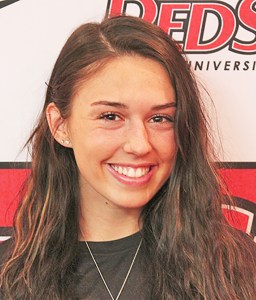 MIDDLETOWN, Ohio – Just call her Kenzie the Krusher.
It was a time of crushing the softball for Rio Grande RedStorm junior softball standout Kenzie Cremeens so much that she was rewarded for her efforts.
The RedStorm third baseman and catcher was so impressive she earned the River States Conference Player of the Week for March 1-7.
The junior from Ironton High School went a sizzling 6-for-7 with four extra base hits in a doubleheader against the Mississippi University for Women.
Among her hits were two doubles, a triple and a home run as she produced a lofty .857 batting average. She also drove in three runs and scored five times.
In the first game, Cremeens went 3-for-4 with a double and a homer in a 7-4 win. She followed that by going 3-for-3 with a double, a triple, three runs scored and an RBI in the nightcap.
Rio Grande is 6-3 and continues play at the Fast Pitch Dreams Classic in Myrtle Beach, S.C. on Wednesday.