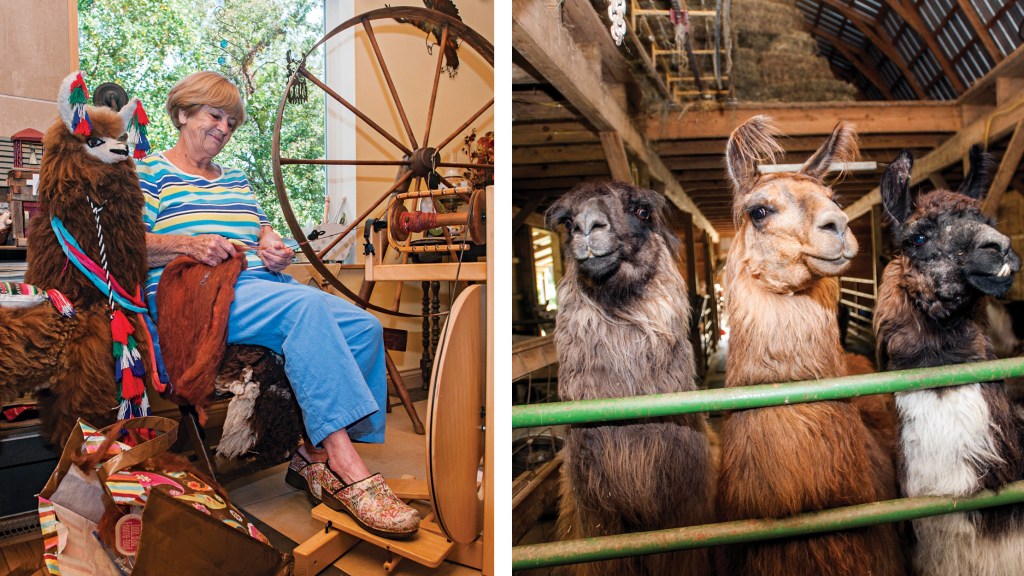 In 1996, Chesapeake residents Tom and Judy Ross purchased their first two llamas from a breeder in Johnstown, Ohio. In the 25 years since, they have raised a herd of 11 of the animals and built two businesses from them.

The couple, who operate a hillside farm on County Road 104, founded Good News Llamas in 2013. They can be seen regularly at events throughout the county, where the public are given a chance to meet the animals.

They built a specially-designed barn with a high roof to house the animals. Tom notes the added height creates more shade. The llamas, native to South America, are not fond of hot temperatures.

He said on hot summer days, they prefer to stay indoors where there are fans, but when subzero temperatures occur in winter, they are completely comfortable outside. The animals have a good-sized run of the land and hill on the property.

Having multiple stomachs, they subsist on the large amount of hay in the barn, as well as grass. However, due to lack of nutrients in the region’s soil, Tom said they also give them a supplement of feed.

The Rosses routinely visit schools, churches, scouting groups, camps and nursing homes, bringing joy to those they meet. Tom describes the business as a ministry and they also welcome visitors and educate them about the llamas and their care.

In addition to Good News Llamas, the couple also owns Backporch Fibers, which produces products made from the hair, which is dyed and spun into wool by Judy, then dyed various colors.

Back Porch Fibers produces yarns in a large variety of colors, while they also sell things such as scarves, hand-woven rugs, clothes and handbags.

They offer various types of spinning fibers that include llama, alpaca and sheep fleeces and design fiber and wool art for felting and spinning. Yarns can be customized and made to order.

Some of their newest items are framed pieces of artwork, started on a felt background, in which layers of their fabric are arranged to form a picture.

“We give lessons on making them,” Judy said, stating they are popular with schools and events.  “I bring a calendar and sample pictures. They look at those and design a picture.”

Some are purely abstract, while others are representational.

“This one’s a solar system,” she said of a work in progress, depicting the planets and sun.

Another new addition are ornaments, made from transparent plastic balls. She says this is one she regularly teaches children in schools to make.

“You get a handful of the yarn and you push the fiber into the ball,” she said.

Judy says the yarn is extremely popular and she sells as much as she makes. They distribute it to local craft shops and they usually set up at fairs and festivals, though this has been curtailed by the COVID-19 pandemic and the last year has been a quiet one for them.

Typically, they host visitors at the studio, where they can get a hands-on experience in fiber making and learn how to use dyes and other processes.

Displays covered everything from livestock, to beekeeping, to maple syrup making, as well as nutritional education by the local 4-H extension office.

“We wanted to highlight where things come from and how they are made,” Judy said.

For their display, t hey not only brought a pair of their llamas, but had a spinning wheel and drum set up, showing everything that goes into making their products.

“Every aspect needed to produce, we showed how,” she said.

She said it quickly grew and attendance really took off in the event’s second year in 2019.

“We had hundreds there,” she said.

While the pandemic forced a cancellation in 2020, she said they hope to bring it back in the fall this year, if conditions allow.

Judy says they have a mission to help artisans around the county.

“We want to promote getting back to the arts and making homemade things,” she said, adding that, often, the public does not understand how much goes into a unique, handmade piece, rather than something mass-produced in a store.

She points to the scarves on a rack as an example.

“You process the fiber, then spin it into yarn,” she said of what takes place first before knitting and weaving begins. “It’s a big process and sometimes, people don’t realize the quality of a handmade item.”

She said she has been hoping to organize some sort of countywide event that they could invite local artisans to set up and show their work and do demonstrations of their processes.

“Our area needs that,” she said.

She points to the Backwoods Festival, in Thornville, Ohio, that she and Tom attend, as an example of how such an event could be popular. She said she could also envision a permanent space, set up in a building, where artisans could rotate in throughout the year, an idea she has been pitching around the county.

She said, not only could this help those who produce, but it could be a major boost for tourism for the region.

“There are so many artisans here – people who do pottery, wood carving soap making.” she said. “I think there are enough artisans in Lawrence County and people would be really interested.”