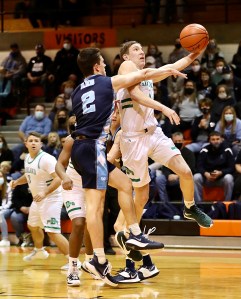 Fairland Dragons’ Aiden Porter attacks the basket for a layup against the defensive efforts of Adena Warriors’ Nate Throckmorton (2) during the Division 3 district championship game last Friday. The Dragons won 56-48 and will play Fort Frye Wednesday in the regional semifinals at Southeastern High School. (Photo By Tim Gearhart)

PROCTORVILLE — The Ohio Division III Regional semi-final matchups are set as the Fairland Dragons are going to get a shot at revenge against the Fort Frye Cadets.
The Cadets defeated the Dragons in their first meeting this season on Dec. 12 in a game that came down to the last shot. Fort Frye stopped Fairland on a final possession to secure their win 54-53.
Fort Frye also knocked out the Dragons in the regional semi-finals in football this season — they have had Fairland’s number this year.
The Dragons have hit their stride this postseason however, and are looking to continue their strong play after winning their fourth straight district title over Adena, 56-48.
Fort Frye defeated Tuscarawas Valley easily in their district final game to advance to the sweet sixteen in a 61-41 lopsided affair.
Fairland is led by junior guard Aiden Porter who is averaging 22 points per game on a 52 percent field goal percentage — also the District Player of the Year. The 1,000-point scorer also averages 4 rebounds, 3 assists, and 2 steals for the Dragons.
Clayton Thomas is averaging 13 points per contest and does most of his damage from behind the arc as one of the best shooters in southern Ohio. Jacob Polcyn, averaging 9 points and 6 rebounds, is another large part of the Fairland offense while Gavin Hunt and Jordan Williams round out the starting five.
The Cadets are led by Nic Hart, who leads the team in points and rebounds, averaging 18 points per game and snagging 7 rebounds.
Kelton Fogle is right behind Hart in scoring with his 16 points per and Luke Huffman also adds valuable scoring with 10 PPG. Fort Frye rounds out the starting lineup with Owen Brown and Braden Medley.
The Dragons stunt an overall record of 20-4 and the Cadets sitting at 20-2. The rematch should live up to all the hype and will be played at Southeastern High School at 8 p.m. on Wednesday.
The winner will advance to the regional finals where they will take on the winner of Wheelersburg and Worthington Christian. That game will be played at 5:30 p.m. prior to the Fairland-Fort Frye game.
The regional championship will also be played at Chillicothe Southeastern High School on Saturday at 7 p.m.
The winner of the championship game will be the representatives of Region 11 in the Ohio Division III State Final Four.