PROFILE 2021: From Ironton to the World 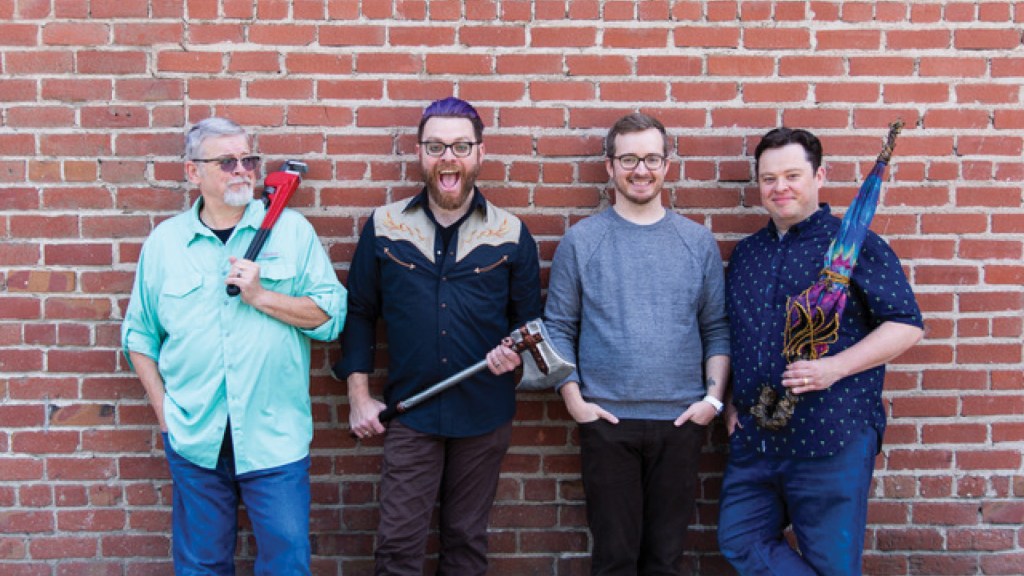 Clint McElroy has been a well-recognized name to the Tri-State for some time.

He was a fixture on local radio for decades, and was inducted into the Greater Huntington Wall of Fame in 2009.

But, in recent years, McElroy and his sons have exploded in popularity, building an international audience with their podcasts and topping the New York Times bestseller lists.

“I was born at Lawrence County General,” McElroy, who is an Ironton High School graduate and has moved back to the city, said.

He took his first job at WKEE in Huntington in 1975, where he was news director, before going to Tampa, Florida for three-year stint. Then a friend offered him a job at WTCR back home, where he spent the bulk of his career. There he went on to co-host a morning show with Judy Eaton until his retirement in 2017. Altogether, he spent 47 years on air.

His son, Justin, worked as a video game journalist for Joystiq. Along with his brothers, Travis and Griffin, he co-founded the video game website Polygon in 2012. In 2010, they launched My Brother, My Brother and Me, a comedy advice podcast which quickly received critical acclaim, ranked in the top 10 comedy podcasts on iTunes and would later be adapted into a television show on Seeso.

“They were talking video games and stuff, the three of them,” McElroy said, stating that his involvement began when Justin was planning to go on paternity leave with the birth of his first child and they were recording and stockpiling episodes to run in his absence.

“People were asking about Dungeons & Dragons,” he said, stating the audience suggested the brothers bring him and play the roleplaying game.

“We had never played it and we thought it would be funny,” he said. “We did one and we had a blast.”

Initially done as an experimental episode of My Brother, My Brother and Me, it was expanded to become the spinoff podcast titled “Adventure Zone,” which has produced three seasons and more than 100 episodes.

As a longtime veteran of radio, McElroy said there are some differences in podcasting, with the format allowing them to open up to more long-form discussions and also tackle adult topics.

“And I don’t mean language,” he said, “But the kind of things a child couldn’t wrap their heads around.”

He said podcasting also allows the listener to stream or download shows at their choosing.

“One of the benefits is you get what you want, when you want,” he said.

McElroy also said the Internet has also allowed niche shows around genres to thrive. An example he gives is if someone wanted to do a show around the lore of “Dr. Who.”

“If you said, ‘Hey I want to do that,’ it wouldn’t fly in terrestrial radio,” he said. “But, if you put it out as a podcast, it could find an audience.”

The format has been so accessible, the brothers have written a book, “Everybody has a Podcast (Except You),” a comedic guide which walks the reader through the process of recording, editing and promoting a show.

But ultimately, McElroy said the experience has much in common with radio.

“You still have to make it accessible,” he said. “You have to get the word out and make a good product that people want to listen to. At its very basis, it’s the same connection. If you do a good job, then they will connect with you.”

Along with his sons, McElroy has written the graphic novel series around their Adventure Zone Characters in 2018. With three volumes out so far from Macmillan Publishers, the books have been an enormous success. The first volume became the first graphic novel to reach the number one spot on The New York Times bestselling fiction list. A fourth volume is scheduled to be released in July.

It wasn’t the first foray into comics for McElroy. In the 1980s and 1990s, he wrote for independent comics companies NOW and Eclipse Comics.

He said this came about through his friendship with Beau Smith, a Kenova resident, and getting to know people in the industry, such as writer Chuck Dixon.

“Through those connections, I got writing jobs,” he said, stating Dixon asked him to co-write a Green Hornet series for NOW.

He said the process was much more difficult in those days, before email made it much easier to work remotely. He recalls a conversation he had with famed Marvel Comics writer and editor Archie Goodwin, who told him the way to succeed as a writer in the business was to move to New York City, where the major publishers were based, something he could not do having three children and a radio job at the time.

“So it wasn’t quite as easy then,” McElroy said.

In writing the “Adventure Zone,” McElroy talks about the team effort, which they work on from across the country — Justin (a former reporter at The Ironton Tribune and The Herald-Dispatch) is still based locally, in Huntington, while Travis lives in Cincinnati and Griffin is in Austin, Texas.

“When we first started talking about turning ‘Adventure Zone’ into a novel, I was the one who had scripting experience and knew how to lay things out,” he said.

Working in word documents, he said they lay out the plot and break down how the panels will appear on the pages.
“We use the transcripts from the original episodes, then we refine them, throw out jokes and change things,” he said. “We play our individual character and hone in on the dialogue of a particular character and say ‘He would say this’ while Griffin hones in on the storyline.”

In addition to “Adventure Zone,” the McElroys have also written a five-issue mini-series for Marvel Comics, a revival of the “Journey Into Mystery” in 2019 as part of the publisher’s larger “War of the Realms” event storyline.

For this, they decided they wanted to avoid the company’s marquee characters, opting instead to write what McElroy describes as “third drawer” players, such as Wonder Man, Balder the Brave, the Kate Bishop version of Hawkeye and others.

“Justin really wanted to use Aunt May,” he said of Peter Parker’s elderly relative.

Though one of the lesser characters the publisher suggested, the Miles Morales version of Spider-Man, ended up being a major player in the 2018 animated film “Spider-Man: into the Spider-Verse” as they were putting the series together.

“By then, he was huge,” McElroy said.

He said the experience working on Marvel’s characters was a positive one and he later did a solo stint on “Marvel Team-Up,” featuring Captain Marvel and Ms. Marvel.

“They gave us a lot of leeway and freedom,” he said, adding that he has more projects in the works with Marvel.

During the COVID-19 pandemic, McElroy started a series on Youtube, “Stories from Your Gaffer,” in which he does reading from books such as the Wizard of Oz, making use of his radio talents and character voices, doing a chapter an episode.

He said the aim is to introduce these stories to children and he is joined by his wife, Carol.

While he had decided to drop an adaption of J.R.R. Tolkien’s “The Hobbit,” for copyright reasons, he was contacted by writer Neil Gaiman, who gave him full permission to use his works.

“He said not to worry about licensing,” McElroy said. “We’ve done Coraline. It’s been so much fun and we’ve had a great response.”

As for the future, he said the McElroy family hopes to resume doing live events when the pandemic ends and they have been working on a card-based game. And it is this work as a family that enjoys immensely.

“It’s been the most wonderful thing in my life, being able to collaborate with my kids,” he said. “It’s been so rewarding.”