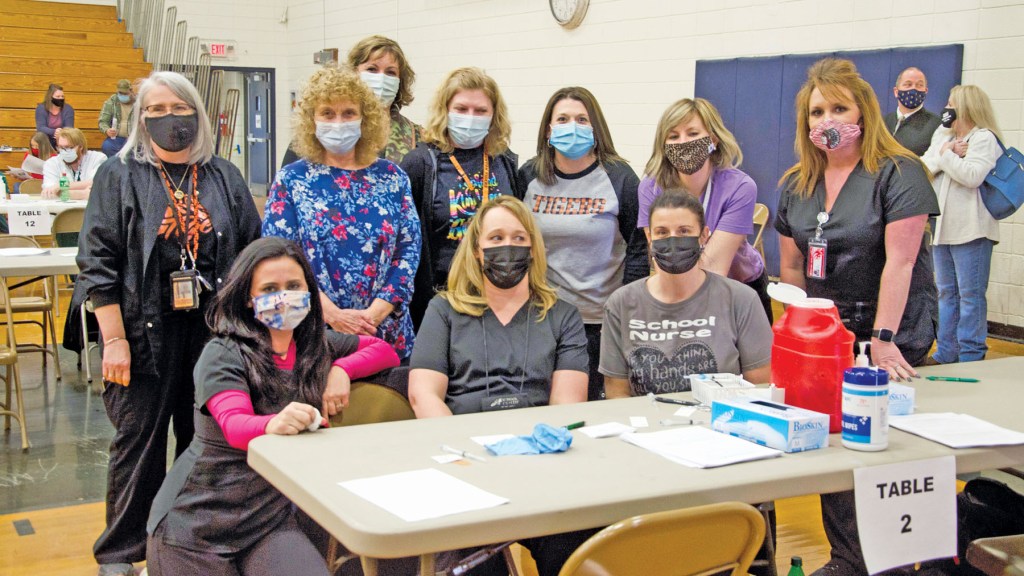 Nurses from Lawrence County’s public schools, along with Lawrence County Department of Health director Georgia Dillon, at a mass COVID-19 vaccination for Lawrence County school employees at the South Point Board of Education in February. (The Ironton Tribune | Heath Harrison)

At the time, there were no known cases of COVID-19 in Lawrence County, but city department heads, county commissioners, local judges, the Lawrence County Health Department and others started gathering to get ahead of what eventually would be a pandemic that swept through Ohio, the United States and the world that would lead to lockdowns and masks.

As part of their duties, Dillon and the health department staff had been monitoring the strange new respiratory infection that had begun in China.

The first cases were reported in Washington state and then in New York, but in Lawrence County, at the time of the meeting, there had been three people tested and the cases had come back negative. In all of Ohio, there were four confirmed cases.

She met with the commissioners and other local emergency personnel trying to figure out their path forward.

“We just didn’t know,” Dillon said. “But you see what happened in Washington, California and New York, it was like, is it going to come here. And then it did come here.”

Dillon said she knew the situation was very serious when on March 3, 2020, DeWine canceled the Arnold Sports and Fitness Expo. The event brought millions of tourist dollars into Ohio, but it also brought thousands of people from all across the U.S. and the world into Columbus. There were protests because there wasn’t a single case of COVID-19 in Ohio.

“It would have been a terrible mess,” Dillon said. “With all those people, it would have gotten here a lot quicker. That cancellation delayed our positivity rate.”

The first positive case of COVID-19 in southern Ohio was reported on March 20 and the person died four days later.

Still, local officials hoped that the county would be spared.

“I remember the first case,” Dillon said. It was March 25 that a Lawrence Countian was found positive for COVID-19.

Six months later, Dillon is looking at a board tracking the cases and realized they had hit a high number of 30 people confirmed to have COVID-19.

“And I’m thinking, man, we could never do 60 cases. Then the next week it hit 60 cases,” she said. “I remember being on the weekly call with Gov. Mike DeWine and they are talking about hundreds of cases and I thought, ‘We couldn’t handle 100 cases.’ Then the next week we have 100 cases in one day. But we managed through that.”

The worst of the cases were just a week or two weeks after holidays like Thanksgiving, Christmas and New Year’s Eve.

Dillon said she really believes God provides in situations like that because they managed to get through it.

“We had high numbers and then we got the vaccines,” she said. “Now, we are seeing four to five cases a day and all our efforts are on vaccines.”

And she was thrilled when ,around Christmas, the first Moderna COVID-19 vaccines were released to the health department. Eleven employees were vaccinated so they could administer it to others in the county in phases, beginning with first responders and those in congregate settings like nursing homes.

“I think there is hope for the future because of this vaccine,” Dillon said. “And it is something we are offering. Everybody has the right to choose if they want it, but I believe in it, my nurses believe in it and they are working tirelessly.”

Dillon said that going forward the health department will be concentrating on their vaccination efforts.

“As of Thursday, we have done 10,000 vaccinations,” she said. “We appreciate the support of all of Lawrence County, from the commissioners, to Mac Yates who supplied us with EMTs, to all the nurses who have helped us, to Mark Christian and the school board for accommodating us. The Lawrence County Chamber of Commerce is supplying lunches for our nurses and volunteers. I mean, we get so much support and we couldn’t have done this without them.”

She said that even with the vaccinations, people still have to remain cautious because variants of COVID-19 have appeared and they don’t know how deadly they are yet.

A regret that Dillon has is the COVID-19-related illnesses and deaths that have happened in the past year.

“We know that a lot of people have lost family members,” she said. “And we were sad because there were a lot of deaths and people lost their loved ones.”

According to the New York Times, at least 1 in 11 residents have been infected, a total of 5,297 reported cases. The county has a population of less than 60,000. There have been 86 deaths.

PROFILE 2021: From Ironton to the World