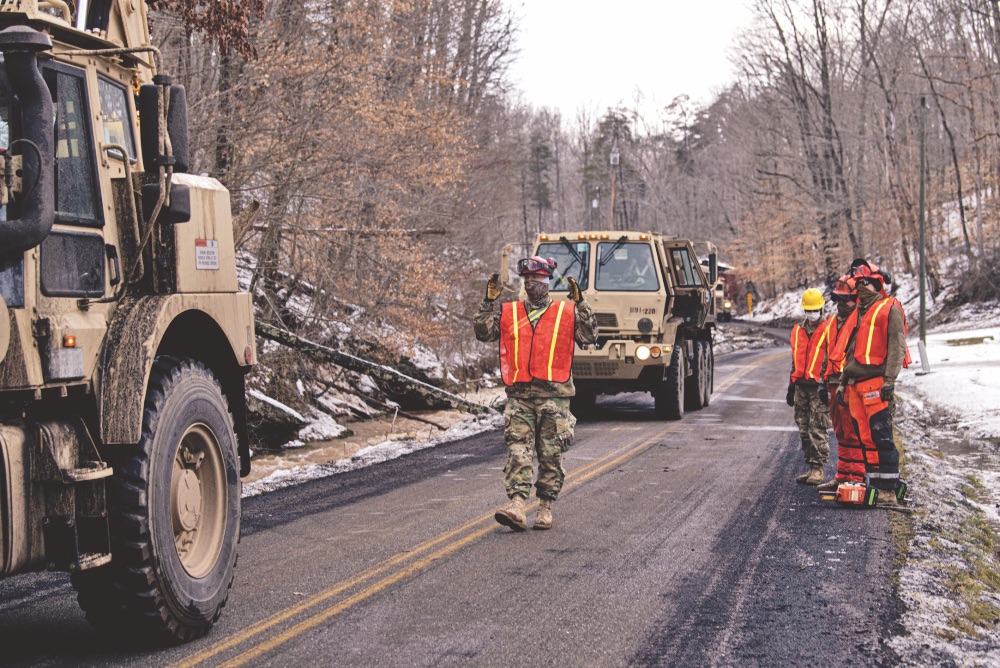 COLUMBUS — On Tuesday, the Ohio National Guard announced that its members had completed a mission in Southern Ohio where they helped clear nearly 230 miles of roadway during a 15-day activation.

“They were a tremendous help to the county,” said Lawrence County commissioner DeAnna Holliday. “They accomplished in two weeks what would have taken us weeks or even months to do and we are very thankful that they helped to get us to a manageable state and we are very blessed.”

Holliday said that the townships and trustees still have a tremendous amount of work to do and the commissioners are applying for funds to help the trustees and the whole county.

Approximately 60 soldiers from the Army National Guard’s 1191st Engineer Company, based in Portsmouth, and 40 airmen from the Air National Guard’s 200th RED HORSE (Rapid Engineer Deployable Heavy Operations Repair Squadron Engineers) Squadron, based in Port Clinton and with a detachment in Mansfield, began supporting local authorities on Feb. 21 and finished on Sunday, March 7.

“The airmen and soldiers showed a lot of flexibility when faced with challenges, including flooding, to get the job done. It’s a great example of the level of professionalism our service members have,” said Ohio Army National Guard Lt. Col. Matthew Molinski, commander of the Guard’s joint task force that oversaw the support. “This was not just about clearing roads. We were there to help the residents in each of those counties. The community support we received was amazing, and we gained an appreciation for helping our fellow Ohioans in their time of need.”

The airmen and soldiers used chain saws, wood chippers, front-end loaders and other heavy equipment to clear away fallen trees and other debris clogging critical infrastructure. They hauled away about 490 loads in dump trucks.

The Ohio National Guard has a long history of supporting the state during emergencies. In 1978, ONG Soldiers and Airmen were activated to provide support across all 88 counties following a severe blizzard that struck the state. In 2009, when the H1N1 Pandemic hit, the ONG answered Ohio’s call to duty, distributing vital antiviral medications and other medical supplies. Today, hundreds of Guard members are activated to assist in the state’s response to COVID-19 at food banks, vaccination clinics and personal protective equipment (PPE) and vaccine warehouses.