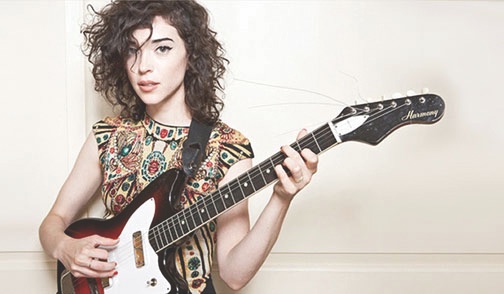 St. Vibncent will be among the keynote artists for Ohio University's Music Industry Summit on March 25. (Facebook photo)

The Summit will feature a diverse collection of voices, providing insight on the opportunities and challenges in the music industry.

Students, educators and the public can register for free and learn about multiple areas of the music industry, as well as how artists and leaders are navigating the challenges of the pandemic.

“The conference provides a platform for many prominent leaders and talented artists to share lessons, stories and guidance with attendees who are interested in entering the industry,” Josh Antonuccio, director of the OHIO School of Media Arts and Studies and the Music Industry Summit, said.

“The Music Industry Summit is a signature opportunity for the Ohio University community and guests to see inside the music industry,” Dean of the Scripps College of Communication Scott Titsworth said. “Using our strong connections within the industry, including our fantastic alumni, we believe the Summit is one of the best of its kind in the world and will inspire and propel students who want careers in this exciting industry.”

All the featured artists and producers have garnered substantial success for their artistic contributions. FINNEAS swept the Grammys with Billie Eilish in 2020 and St. Vincent is a Grammy-winning musical innovator. MixedbyAli’s work is behind hit recordings, including Kendrick Lamar’s discography, Childish Gambino’s This is America, Cardi B’s Invasion of Privacy, SZA’s Ctrl, Roddy Ricch’s The Box and Mac Miller’s The Divine Feminine. More recently, he mixed multiple tracks for the Judas and the Black Messiah soundtrack. Phoebe Bridgers was nominated for a Best New Artist Grammy and had her debut on Saturday Night Live in February. Run the Jewels have established themselves as one of music’s most adventurous hip hop duos, releasing numerous critically acclaimed albums and scores of high-profile features.

Registration is now open for the free virtual event at https://www.ohio.edu/music-industry-summit.

Doug Johnson: An infidel loses a match of wits…