PROFILE 2021: Ready for the Future 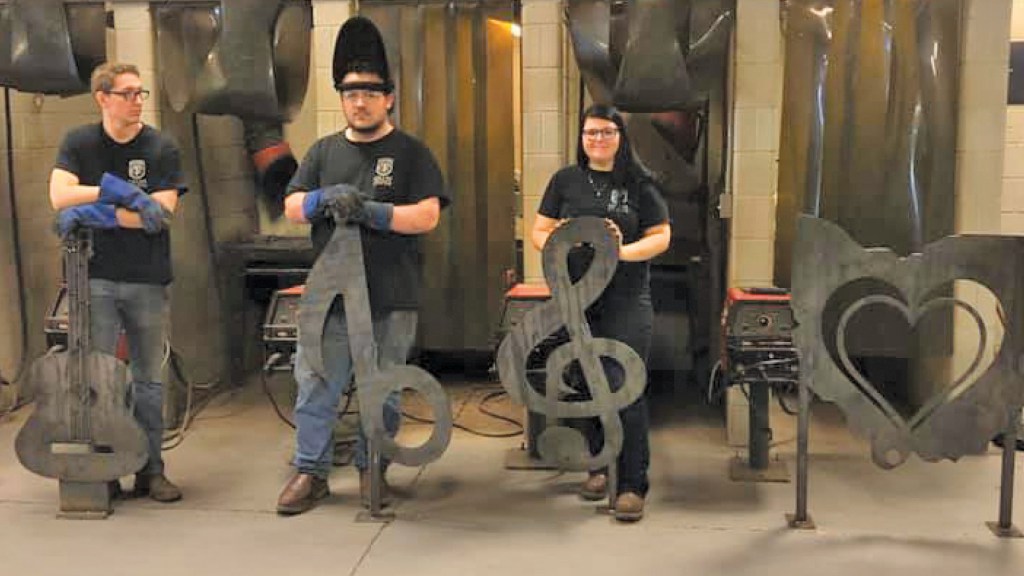 For decades, Collins Career Technical Center, located in Getaway, has been preparing local students for the future, working with schools throughout Lawrence County to teach the vocational skills needed for a wide field of careers.

And, in the last few years, evidence of their work can be seen in a number of projects throughout the county.

One example superintendent Steve Dodgion points to is the school’s welding program, which has about 40 students enrolled.

Not only did they make the sled and other decorations for the Lawrence County Chamber of Commerce’s Festival of Trees and Christmas Market in 2019, but they recently brought something unique to downtown Ironton.

Working with the nonprofit Third and Center and Abby Kuehne and Amanda Cleary, owners of The Vault Market, CCTC students designed and built artistic bike racks that were installed in spring 2020.

“I was amazed at how creative these guys are,” Dodgion said of the welding students. “We were contacted by the ladies from The Vault and they gave us themes they wanted and then the students came up with designs for those themes.”

The colorful pieces took the form of a treble clef, a guitar, and eighth note and the state of Ohio and were installed by city workers near the Rotary fountain.

“There was so much thought in those designs,” Dodgion said.

The school’s carpentry program has also been busy, he said.

They’ve been working with the Lawrence Economic Development Corporation to design and build a disability-compatible ramp for the caboose in downtown Ironton.

They also worked with the South Point school district, building two gazebos for each of the elementary schools, which can be used for outdoor reading.

“It creates a nice atmosphere on their campuses,” Dodgion said.

And students from the programs have also worked with Habitat for Humanity, building homes for veterans in Huntington.

“The students get a real kick providing homes to veterans,” Dodgion said.

Dodgion is especially proud of Project Lead the Way, the STEM education program CCTC offers to most of the county’s school districts.

PLTW students have been active on several fronts, from helping to design and build new concession stands for Symmes Valley High School to offering testing for the water supply of the city of Ironton.

A team of PLTW biomed biomedical students from Ironton High School spent summer 2019 collecting samples from older homes, and checking for coliform, a bacteria whose presence in drinking water can indicate the presence of disease-causing organisms.

Dodgion said the water testing project was an example of the 60 hours of community work PLTW students are required to complete.

“We take pride in community service,” he said.

In its 16th year at CCTC and with 700 students enrolled, beginning in middle school, Dodgion points out that Project Lead the Way, which offers hands-on biomed and engineering courses, made Lawrence County one of the first in the state to offer STEM education.

“The original program was in Akron,” he said. “And we met with the gentleman from that program and built the program in              Lawrence County.”

Dodgion spoke of new opportunities coming up for PLTW, this time in the aerospace industry.

Marshall University and the Robert C. Byrd Institute are partnering with Yeager Airport in Charleston to create a pilot school, on which the ground has already been broken, Dodgion said, while an airplane mechanics school will be located at Tri-State Airport in Huntington.

Dodgion said he has met with officials from those programs and that PLTW students will be heavily considered for the pilot school.

He said engineering students will have an opportunity to study airplane mechanics, while aviation classes will be offered at three of PLTW’s home schools.

Dodgion said that PLTW, which focuses its curriculum on problem solving and teamwork, has been a big success for the county.

“We have 80-100 students who are practicing engineers or currently in engineering schools in the U.S.,” he said. “We have that many students who came out of Lawrence County.”

Matt Monteville, satellite director for PLTW, breaks down those numbers.

Monteville points out that it takes five years to go through the PLTW program and a minimum of either two years for an associate degree or four years for a bachelors.

“That is seven to nine years,” he said. “We have students in fields such as pharmacy, and physical and occupational therapy which are a minimum of six to seven years, plus the five they spent with us. I believe it is even more impressive when you take into account the time required to be ready for employment.”