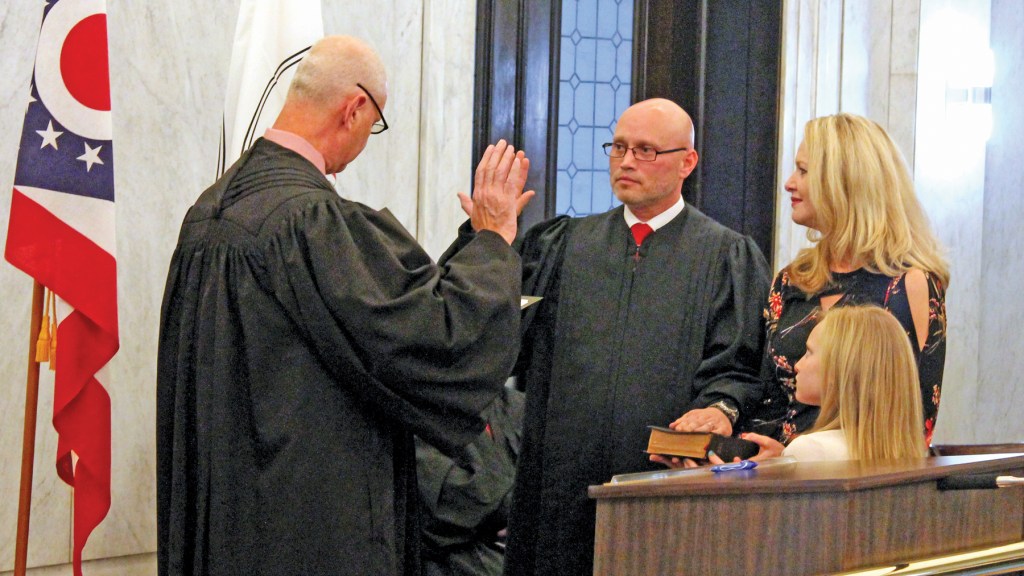 Ironton Municipal Judge Kevin Waldo administers the oath of office to Jason Smith, as he is sworn in for his seat on the Ohio Fourth District Court of Appeals in January 2019. Smith has been selected to fill a slot on an upcoming Ohio Supreme Court case for which a justice has recused himself. (The Ironton Tribune | Dustin Melchoir)

Fourth District Court of Appeals Judge Jason Smith will be sitting in with the Ohio Supreme Court later this month to hear a contract review case.

Smith will be serving place of Justice Michael Donnelly, who has recused himself from the case, Northern Frozen Foods Inc. v. Ross C. Farro, which will be up on March 30.

The Cuyahoga County case began in common pleas court there, then was initially appealed to the 8th Circuit, which is comprised entirely of that county, Smith said.

Of being selected for the high court, he said this something all appeals judges in the state may be called on to do when a Supreme Court justice recuses from a case.

“When I took office, they said it could eventually happen,” he said.

Smith was elected in 2018, defeating incumbent Marie Hoover, and sworn in at a ceremony at the Lawrence County Courthouse by his uncle, Ironton Municipal Judge Kevin Waldo, in January 2019.

A 1993 graduate of Ironton High School, he went to Ohio State University and then later served in private practice, as assistant Lawrence County prosecuting attorney, and as in-house counsel for McGinnis Inc., located at The Point industrial park in South Point.

His wife, Kelly, serves as a representative for Ohio Treasurer Robert Sprague.

Smith, who is presiding judge on the four-judge Fourth Circuit, says his experience in that position has been “fantastic.”

“I absolutely love it,” he said, noting that they take appeals from all matters, ranging from property disputes to criminal case to contract cases. “You never know what kind of case you will get.”