The Swimmin’ Simpsons swallow up awards 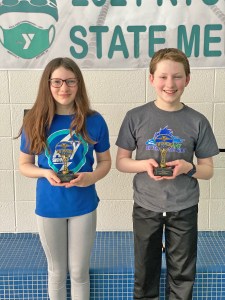 Gavin Simpson is a seventh-grade student at St. Joseph Central Catholic. Kendall Simpson is a fourth-grade student at St. Lawrence Elementary.
During their religion classes they have learned how Jesus walked on the water. And although they now they can’t walk on water, they’ve decided to swim through water.
And swim they have.
The brother and sister duo who are members of the Ashland Area YMCA River Monsters Swim Team have been enjoying an award-winning career in their young competitive careers.
Gavin, now 13, competed in the Kentucky YMCA Competitive Swim League State championships the weekend of March 5-7. He competed the six events and came away with a win in the 200-yard individual medley and the boys age 11-12 High Point Winner.
He also competed in the 500-yard freestyle, the 100-yard individual medley, the 200-yard freestyle, the 50-yards breaststroke and the 100-yard breaststroke.
This weekend, he is competing at the Great Lakes Zone All-Star Meet at Bowling Green State University where he qualified in the 200-yard IM, the 100-yard IM, the 50-yard breaststroke and the 100-yard breaststroke.
Kendall, 8, also competed in the YMCA Competitive Swim League State Championships and matched her brother by racking up the girls age 9-10 High Point Award.
She racked up a first-place finish in the 100-yard individual medley and also swam in the 50-yard butterfly, 50-yard breaststroke and 50-yard freestyle.
Kendall swam in the USA Swimming Kentucky Short Course State Championships at Louisville and she made it a memorable performance.
Kendall came away the 50-yard breaststroke state champion in the 10-and-under age division.
In other events, Kendall was second in the 100-yard breaststroke, fourth in the 50-yard fly, fifth in the 100-yard individual medley, and sixth in both the 50-yard freestyle and the 200-yard freestyle.
She has qualified for th3 Great Lakes Zone All-Star Meet next weekend.
Their parents Jennie and Brent Simpson said they saw something that made them realize their son may have a gift for the sport.
“We tried soccer and basketball and we saw a spark in him,” said Jennie. “Both have amazed us at how well they’ve done.”
Gavin remembers going to practices and then having some of the River Monsters Team officials approach him.
I first went to get swim lessons and I didn’t know they had a swim team. The last day they asked me to be on the swim team and I said I’d think about it. I talked to my parents and then joined the team,” he said.
Gavin tried other sports before he settled on swimming and he’s taken to it like dog to water.
“I like it better. It’s easier to meet more people,” said Gavin. “And I like saying I can beat my friends.”
Kendall started swimming at age 7 and then began team swimming the next year. She, too, has adapted well to the sport.
“I took lessons at the same time (as Gavin),” said Kendall. “I like the meets. I just like racing. But I still like to win.”
Besides making a wide variety of friends, there have been several different meets including the most unique venue at the Blairwood Swimming and Tennis Center in Louisville, Ky., which had an outdoor dome.
“It was different, but it was normal when you just swam,” said Gavin.
The success of swimming isn’t restricted to the water. Gavin has also won out of the pool by talking about the pool.
Gavin did a science fair project last year about all that’s involved in dragging a pool. He won the county, district and regional levels and the earned a superior rating at the state level.