KENTON — The Ohio Valley Conference was represented well at the state powerlifting meet in Kenton, Ohio last Friday with Fairland winning their first ever state meet in the boys

division after a team total of 12,880 pounds.
Coal Grove finished right on the heels of the Dragons in second place with a total lift of 12,550 pounds and South Point ended the meet in sixth place with a team lift of 9,355 pounds.
The Fairland girls finished third in their division with a lift of 4,555 pounds and Ironton’s solo act in Emma Hall finished 12th with a total lift of 725 pounds.
Hall placed second in her weight class with a squat of 290, bench press of 135, and a deadlift 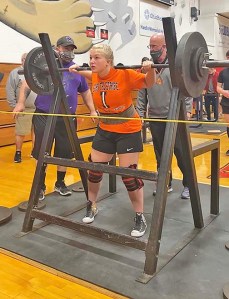 of 300 for Ironton’s total.
The boys 250 class was won by Coal Grove’s Austin Stapleton with a lift of 1,420 pounds and Fairland’s Zach Trent was second with 1,385 pounds.
The state champion for the boys unlimited division was