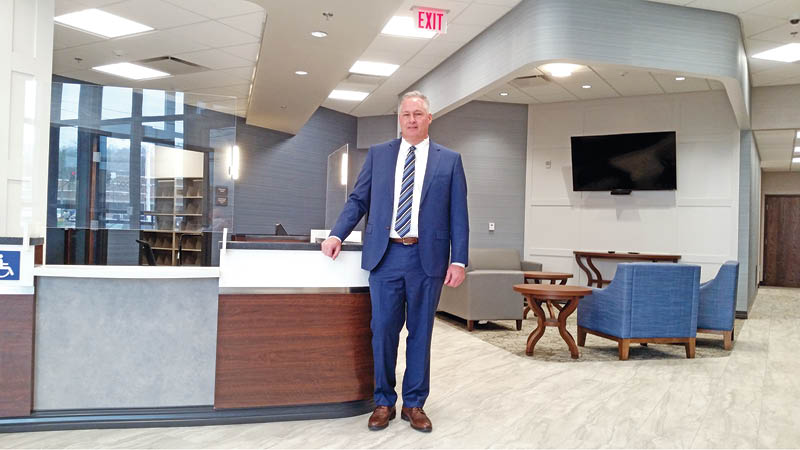 The three-story facility began roughly a year ago and after some pandemic-related delays is ready to open. Over the weekend, crews moved furniture and files from the old location on Armco Road.

Jeff Lyons, vice president of lending and commercial lender, said the credit union needed a new building because, while their Armco Road location is only 15 years old, they had outgrown the building.

“When it was built, I don’t think it was anticipated the kind of growth and loan productivity we would have in this area,” he said. “We had taken spaces that weren’t intended to be offices, we had to add on a little space for a conference room. We cut down the teller line for another office and really, we had just outgrown it.”

They also wanted to have more room so they could train the next generation of lenders.

The third reason was that, although their former building had served them well, it was no longer the best location for their customers.

“It was kind of out of the way,” Lyons said. “You don’t notice it, it’s kind of a destination. This one very much has the visibility we were looking for and the accessibility.”

The first floor of the Desco building includes a lobby, the area for tellers and offices for consumer lending and member service representatives. The second floor is for commercial lending and a conference room. Third floor will be the space for the credit union’s servers and information technology department, which will be moved from their Portsmouth office.

“The IT department is a growing department and it grows in importance daily,” Lyons said. “We felt like Ashland was a better place to locate the IT department because you have a better chance of recruiting talent to this area, because it is central to all our locations. And if they have to go another location, the bridge is right here to get to the highway.”

Desco has locations in Ironton, Huntington, Minford, Wheelersburg and two in Portsmouth.

Desco Credit Union was started in 1964 when several employees of the Detroit Steel plant gave birth to the name, an abbreviation of Detroit Employees Steel Company.

Lyons said the new building will be a lot more accessible for their customers.

“The location is much handier for them to get to,” he said. “And I think it shows our commitment to the area. It is quite a large investment. It shows we are here to stay.”