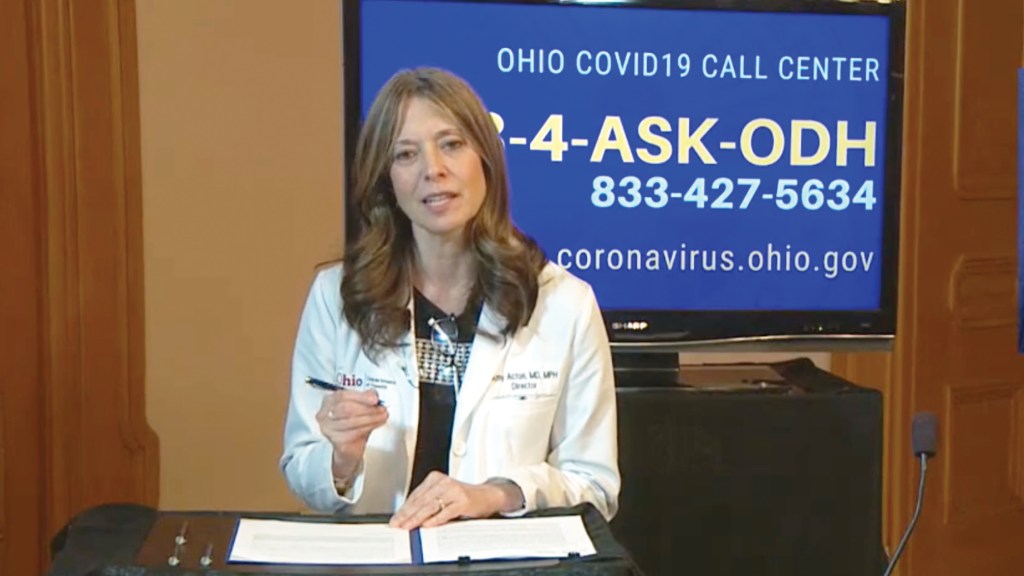 Dr. Amy Acton, then-director of the Ohio Department of Health, speaks at a news conference on the COVID-19 pandemic in April 2020. A new poll shows Acton with the highest favorable among potential Democrats with her party’s voters. (The Ohio Channel | Screengrab)

While no Democratic candidates have officially announced yet for the 2022 U.S. Senate race in Ohio, a new poll finds that former Ohio Department of Health director Amy Acton leads in favorability among her party’s voters.

According to a survey released last week by Public Policy Polling, 64 percent of Ohio Democratic voters view her favorably, with only 5 percent holding a negative view.

The poll found that 31 percent of voters said they did not have an opinion.

Acton, who won national acclaim for her work during the early months of the COVID-19 pandemic, resigned from her position last summer. She says she is considering a run for the Senate seat bring vacated by Republican Rob Portman, who is retiring.

Also considering a run for the seat is U.S. Rep. Tim Ryan, D-Ohio, for whom his party’s voters held a 48 percent favorable view. The poll found 13 percent viewed Ryan unfavorably and 39 percent had no opinion.

PPP polled Acton and Ryan in a head-to-head match and found that Democratic voters preferred Acton, 37-32 percent, with 31 percent undecided.

On the Republican side, former Ohio Republican chair Jane Timken has announced a run for the seat, as has former Ohio Treasurer Josh Mandel, pilot Michael Leipold and IT executive Mark Pukita.

Libertarian candidate Shannon Marie Taylor has also announced a run for the seat.