Votto looking to be a dangerous hitter again 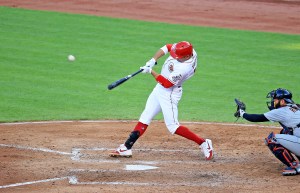 In the final scene of the movie “Big Jake,” John Wayne’s character was trying to save his grandson from a gang of outlaws who had kidnapped the boy and wanted $1 million in ransom.
Wayne — standing there alone — looks around and sees all the different men in various positions, grins at Richard Boone’s character and says, “You must think I’m a real dangerous man.”
And “The Duke” proved to be dangerous as he and his sons killed everyone and save his grandson.
Enter the reality of the 2021 Major League Baseball season where Cincinnati Reds’ first baseman Joey Votto must go against those evil opposing pitchers.
In 2017, Votto was the runner-up by one point for the National League MVP with a .320 batting average, 36 HRs and 100 RBIs. But that was followed by .284, 12 and 67 in 2018 and .261, 15 HRs and 47 RBIs in 2019.
Last year in the 60-game pandemic shortened season, Votto hit .226 with 11 homers, 22 RBI and 32 runs in 186 at-bats.
Now 37 years old and near the end of a 12-year contract that will pay him $25 million this season, Votto doesn’t want to hold the Reds at ransom for his salary. He wants to be dangerous again when he stands alone in the batter’s box and stares down the opposing defense.
“I want to get back to being dangerous,” Votto said. “I’ve led the league in slugging percentage. I have to remind myself that at the core that’s who I am.”
Votto didn’t make excuses about his past three seasons. He knows he’s not the same player who won the 2010 MVP award, but he is not about to surrender his gun and ride off into the sunset just yet.
“(Last season) I was able to train, I was able to prepare, so there’s no excuse on that end,” said Votto who said he has trained hard during the past offseason.
“I had a great offseason in terms of preparation for the season. I feel really well-prepared, I feel healthy, I feel strong, and I’m looking forward to taking some of the adjustments I’ve made from last year and some of the good performance and carrying that and even more into the 2021 year.
“I lost some of my strengths that I first came to the league with — hitting the ball all over the field with power, being difficult to defend. I did that in exchange for command of the strike zone, putting the ball in play, being a tough at-bat. And it zapped my power.”
Things sank so far last season that Votto was sat down by manager David Bell for a three-game stretch. It was the first time in his career Votto had experienced such a humbling moment.
It was at that point Votto decided to make some adjustments. He began to stand taller at the plate, became more aggressive swinging away, trying to hit the ball hard and let strikeouts be damned.
Over the final 29 games, he hit .258 with 8 home runs, 14 RBIs and scored 21 runs. His offensive surge wasn’t just a coincidence and was instrumental as the Reds finished the season strong and qualified for the postseason playoffs for the first time since 2013.
And Votto said he has continued making some adjustments in the offseason.
“I’m back to kind of a more comfortable place in terms of hitting,” said Votto. “Of course, it’s going to come with some more swings and misses and of course strikeouts. But as long as I’m productive and as long as I’m dangerous at the plate, it’ll pay itself off. I have to remind myself that at the core, you know, that’s who I am.”
Bell said he has no intentions of moving Votto down in the lineup. But with the lack of production by the rest of the lineup last season that produced the lowest team batting average in the major leagues, Votto could be vital in jump starting what the Reds thought would be a potent offense.
“He has experience hitting in the heart of the lineup for his whole career. We’ll have to take it as it comes, but going into (the season) we just anticipate him being a huge part of our lineup,” said Bell.
“Joey wants to play every day. He’s less concerned with where he hits in the order. He just wants to be in there and contributing. That makes it easier, a guy with all the success he’s had to have that attitude. It makes my job easier.”
Votto believes the adjustments he’s made and his offseason work will make him much improved from what he has done the past three seasons.
And, once again, he’ll be a real dangerous man.
Just like John Wayne.