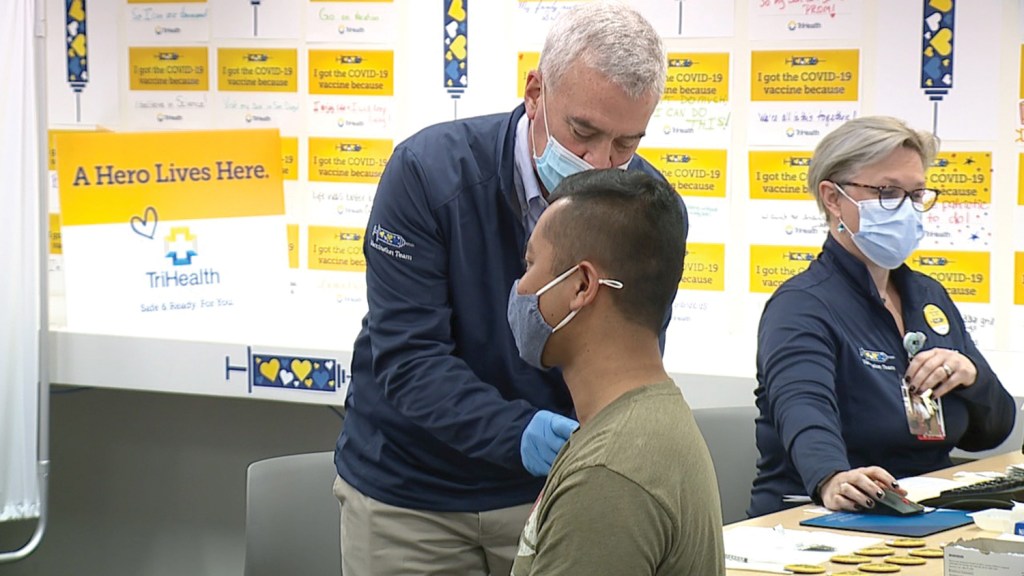 U.S. Rep. Brand Wenstrup, R-Ohio, administers the COVID-19 at a clinic in his district. (Office photo)

NORWOOD (AP) — A Republican congressman gave COVID-19 vaccinations Sunday to promote efforts to get reluctant people to get the shots.

An early advocate of getting vaccinated, U.S. Rep. Brad Wenstrup, of Ohio, is among Republicans concerned about their voters getting inoculated because of unfounded claims about the vaccines.

“A lot of it is distrust in the government,” said Wenstrup a podiatrist who served as an Iraq War combat surgeon. “Everyone is going to have a different reason, I think.”

He said the pro-vaccination television ad in which former Presidents Barack Obama, George W. Bush, Bill Clinton and Jimmy Carter appear didn’t do much to change minds of people opposed to vaccinations.

“I think it’s mixed messages that people have been getting. Get the message from someone you trust, I think is the most important thing,” he said.

He has given shots at several clinics in his district, including twice in his role as an Army Reservist.

There are currently three COVID-19 vaccines approved in the U.S. Studies of those who have been vaccinated found that side effects were minor and typical of the immune system revving up: soreness in the arm, fever and flu-like symptoms including fatigue, chills and headache.

Wenstrup was one of several political figures in the state who was considering a 2022 run for the seat being vacated by U.S. Sen. Rob Portman, R-Ohio, but he announced last week that he will not be seeking the office.