Ironton fails to ‘cash in’ against Russell in 5-3 loss 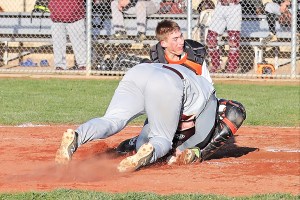 Ironton Fighting Tigers’ sophomore catcher Cole Freeman (4) collides with Russell Red Devils’ senior Nate Conley (24) on a play at home plate during Friday’s game. Conley was originally called safe but was ruled out because he went head-first instead of sliding feet-first as the rule states. (Photo By Tim Gearhart)

When the Ironton Fighting Tigers did cash in, they got coins instead of dollars.
Ironton failed to cash in fully on their scoring opportunities as they lost 5-3 to the Russell Red Devils on Friday.
Ironton had three scoring innings but only managed single runs on each occasion. There was another inning in which they loaded the bases and failed to get any financial gain.
Russell opened with three runs in the first inning.
Ethan Sharp was hit by a pitch, Cole Ward hit into a force play and then R.J. Rigsby and C.J. Bartram followed with base hits for 2 runs and Eric Williams hit a sacrifice fly.
Ironton (2-1) answered with a run in the bottom of the inning when Trevor Kleinman reached on an error, stole second, took third on Cameron Deere’s fly out and scored on a sacrifice fly by Ryan Ashley.
Neither team scored again until the fifth inning.
In the top of the inning, Russell pushed across a pair of runs to lead 5-1.
Rigsby was hit by a pitch and Bartram was safe on an error. Curtis Davis sacrificed the runners up a base and Williams grounded out as a run scored.
Nick Conley then reached on an error to score Bartram and Daniel Blanton doubled for the final run.
Ironton came back with a run in the bottom of the inning
Jacob Sloan walked with one out and moved to second on a passed ball. Peyton Aldridge then reached safely on an error as Sloan scored to make it 5-2.
The Fighting Tigers kept battling and mounted a rally in the bottom of the seventh.
With one out, Kyle Howell walked and Aldridge singled him to third. Ashton Duncan reached on an error as Howell scored.
Cole Freeman walked to load the bases but Rigsby — who came on in relief in the inning — got the next batter to hit into a comebacker to end the game.
Ironton mounted an additional rally in the third but failed to capitalize.
Ashley reached on an error, Sloan and Aldridge both walked to load the bases with two outs. But the next batter grounded out to end the threat.
Kleinman went the first 4 innings for Ironton and took the loss. He gave up 5 hits, 3 earned runs, struck out 6 and did not walk a batter. Ben Taylor finished and gave up 2 hits and 2 unearned runs.
Bartram started and went 3 innings for the win. Rigsby pitched the seventh for the save.
Ironton travels to Fairland on Monday, St. Joseph on Tuesday and entertains Coal Grove on Wednesday.
Russell 300 020 0 = 5 8 4
Ironton 100 010 1 = 3 5 3
C.J. Bartram, J.K. McKnight (5), R.J. Rigsby (7) and R.J. Rigsby, Noah Worthington (7). Trevor Kleinman, Ben Taylor (5) and Cole Freeman. W-Bartram (IP-3.0, H-2, R-1, ER-0, K-1, BB-3). McKnight (IP-2.0, H-2, R-1, ER-0, K-6, BB-2). Save-Rigsby (IP-1.0, H-1, R-1, ER-0, K-1, BB-2). L-Kelinman (IP-4.0, H-5, R-3, ER-3, K-6, BB-0). Taylor (IP-3.0, H-2, R-2, ER-0). Hitting-RHS: Ethan Sharp 2-23, R.J. Rigsby 2-2 RBI, Noah Worthington 1-1, C.J. Bartram 1-4 RBI, Curtis Davis 1-3, Eric Williams SF RBI, Daniel Blanton 1-3 2B RBI; Ironton: Trevor Kleinman 1-4, Cameron Deere 1-4, Ryan Ashley SF RBI, Jacob Sloan 1-2, Peyton Aldridge 1-3, Cole Freeman 1-2.